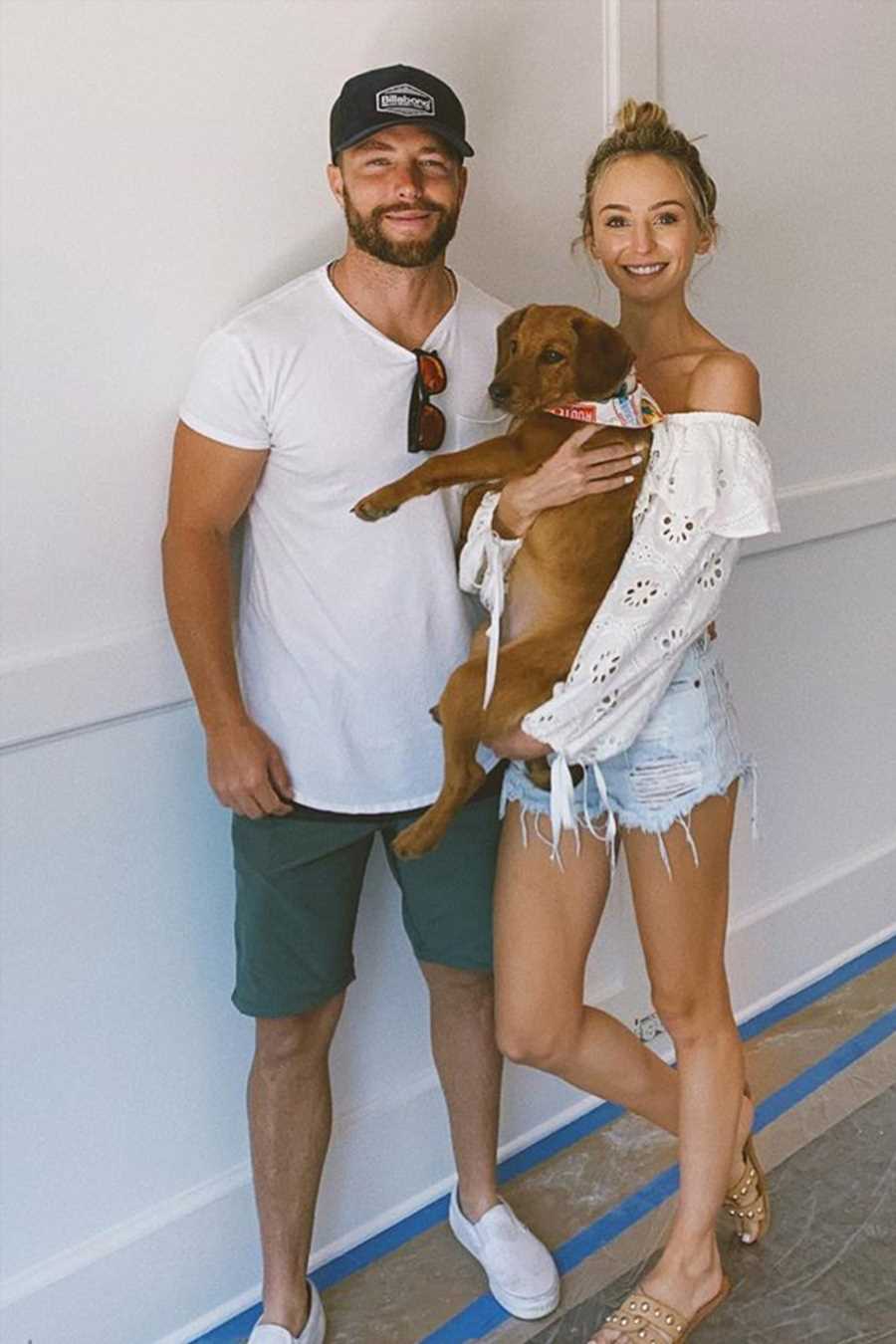 “It’s without shock to anyone who knows me well but, we have decided to make Cooper a permanent part of our family 🐶” the Bachelor alum, 29, said in an Instagram post on Monday.

“So happy we get to love you Coop- now that we have adopted you I’ll start working on your dad and finding you a brother/sister, but for now it’s the 3 of us!” Bushnell said, sharing a photo of herself, Lane and Cooper, who she has been fostering this summer.

Bushnell also shared some more of Cooper on her Instagram Story, showing the pup excitedly coming home from “doggy camp” and then adorably wrapped up in a towel after bath time.

Cooper is a “foster fail” with the couple initially just looking after the pup until he found the right home. At the end of July, Bushnell shared a photo of herself with Cooper, saying she was “one proud foster momma.”

But Bushnell had one more piece of exciting news for her fans on Monday: “Oh! And!! WE BOUGHT A HOUSE! 🏡” she said in her post.

Bushnell and Lane got engaged in June after the “Take Back Home Girl” singer romantically proposed at Bushnell’s parent’s house in Oregon — complete with a song written for the occasion, titled “Big, Big Plans.”

“I knew she wouldn’t want some elaborate crazy proposal,” Lane told PEOPLE at the time.

“So, I decided to keep it pretty casual,” he continued. “I asked her parents for different places in Portland I could potentially take her to, but after a lot of thought I decided doing it at the family cookout would be the most laid-back setting and that she’d appreciate the simplicity of me proposing to her in her parents’ backyard.”

Bushnell told PEOPLE that she “lost it” when Lane got down on one knee. “It was the happiest moment of my life!”

“Chris is the most thoughtful person,” Bushnell added. “He clearly put so much time and thought into not only the song, but also making sure everyone I love most was surrounding us in that moment. Holding each other, hearing the song for the first time and then seeing him get down on one knee is a moment I’ll never forget.”

Lane truly made Bushnell his take back home girl in March, when the reality star traded in her Los Angeles residence to move in with the country star in Nashville.

“Lauren moving to Nashville has been the best thing for our relationship. It’s been such an easy transition and she makes each day even better,” Lane told PEOPLE at the time. “There is nothing like waking up next to the person I love, going about my day — working out and working on music — and then coming back home to her! I’m a lucky guy.”

Bushnell’s famous ex, Ben Higgins, said after the news of their engagement that he’s “thrilled” for the couple — and that he’s also happy it will “close a chapter” between them.

“My life will always be tied at some level to Lauren and Lauren’s to mine, that’s just part of it when you’re engaged for a period of time or when you have a serious relationship at any point in your life,” Higgins, 30, said on his  “Almost Famous” podcast. “You have a piece of them with you.”

He added that he and Bushnell ended their relationship with no bad blood between them.

“There’s two ways to leave relationships: you leave them angry and resentful, or you leave them knowing it was for the best and the world and life will offer you great things afterward,” the former Bachelor — who is currently dating Jessica Clarke — said. “That’s how Lauren and I left the relationship.”

“Ultimately, we left that relationship — both of us — I think, saying, ‘I hope life brings you a ton of joy; I don’t want you upset and alone forever. I hope you find a partner as soon as possible. I hope everything that you want in this world that is healthy and good is given to you,’” he continued. “And that’s exactly how I feel.”