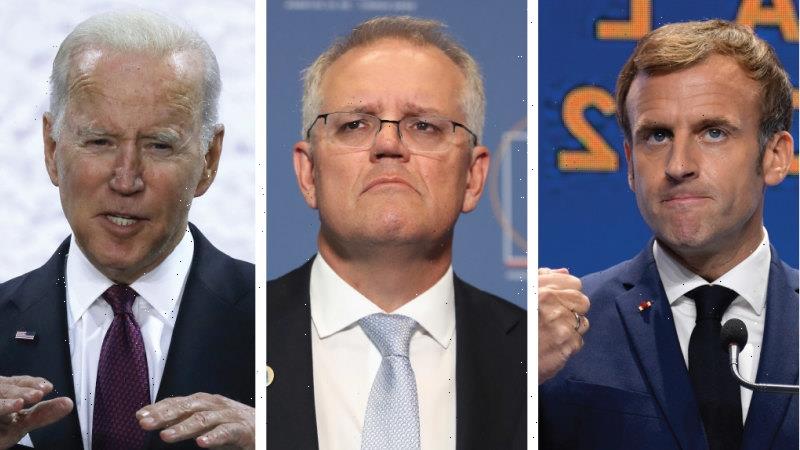 When the content of text messages sent from Emmanuel Macron to Scott Morrison appeared on local news sites on Monday night, some Australian officials feared a new line had been crossed.

The highly co-ordinated leak to three different newspapers wouldn’t just make an already toxic relationship with the French even worse. But it risked further alienating the Biden administration, which has appeared to be trying to publicly disassociate itself from Australia’s handling of the AUKUS announcement despite the Americans being intimately involved in its preparations. 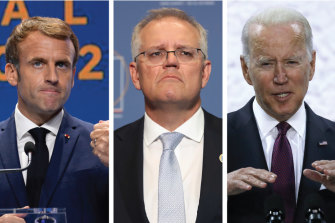 Australia doesn’t want to drag the US further into its worsening diplomatic spat with France.

According to reports in The Daily Telegraph, The Australian and The Australian Financial Review, two days before the AUKUS arrangement was announced, the French President messaged the Australian Prime Minister to say that he was not available at the time Australia was seeking for a phone conversation.

“Should I expect good or bad news for our joint submarines ambitions?” Macron reportedly said in the text message.

The leak from the Prime Minister’s Office angered some Australian officials, with one speaking on the condition of anonymity describing it as a “gratuitous” move that “crossed a threshold”.

But figures close to Morrison believe Macron already crossed that threshold when he called the Australian Prime Minister a liar, and they are now within their rights to defend themselves.

Macron’s accusation of lying was an escalation of an already ugly dispute over Australia’s cancelling of a $90 billion agreement with France to build conventionally powered submarines and instead develop a nuclear-propelled fleet with the United States and Britain.

But something happened 48 hours before that caused more unease for Australian officials. US President Joe Biden called the handling of the AUKUS agreement “clumsy” shortly after meeting Macron in Rome.

“I was under the impression that France had been informed long before that the deal was not going through, honest to God,” Biden said.

Biden’s remark unsettled the Australians because it contradicted what they knew to be true. There was a significant level of communication between American, Australian and British officials in the leadup to the announcement, including a shared document in which they set out how other countries would be informed. The document clearly states that Australia would inform France on September 16, the day of the announcement.

Defence Minister Peter Dutton said on Tuesday there was “just no suggestion at all that can be credibly made about the Prime Minister lying”.

“I’ve been intimately involved in these discussions. There was a working group between the United States, the United Kingdom and Australia, and we worked very closely together in lockstep,” Dutton told 2GB’s Ben Fordham.

“There was a ‘no-surprises’ strategy. The United States and the United Kingdom were kept informed of our every move, and similarly us of theirs, and the suggestion that we went outside of that or there was some other process, is of course just plain wrong.”

With this in mind, there are three main rationales for what Biden said.

First, there is the possibility, as some Australian commentators have been quick to suggest, that Biden is suffering cognitive decline and forgot what he was told. The Australian government, for the most part, doesn’t appear to buy this line.

Second, his officials could have failed to keep him in the loop, and therefore his message was more directed at his staff than towards Canberra. This is a strong possibility.

Finally, Biden and his people could have made the transactional decision to throw Australia under the bus. According to multiple Australian officials who spoke to The Sydney Morning Herald and The Age on the condition of anonymity so they could comment honestly, this is the most credible explanation.

According to this line of thinking, the US needed to repair its relationship with France and Australia could take the hit.

Unlike Australia, the Biden administration cannot afford to have a terminal relationship with the French government: Washington has equities at stake that Canberra does not, including as a NATO partner in dealing with a recalcitrant Russia.

While the US would not have been pleased with the leaking of the text messages, or accusations of lying, China would be loving the diplomatic spat involving three of the most important powers in the Indo-Pacific.

After all, the nuclear-powered submarines are being acquired to provide a more credible deterrence to Beijing as it ramps up its naval presence and aggression in the region.

With this in mind Labor senator Kimberley Kitching, a vocal proponent of Australia’s alliances with both the US and France, says it is important that all three countries return to a good footing in their relations with each other.

“There may come a time when democracies must stand together, and may have to make very difficult decisions. There must be trust and a concert of views amongst those democracies.”

Kitching says it is fortunate that Australia has “such professional and first class people in our intelligence agencies who have been able to communicate with our allies”.

“It’s unfortunate the Government’s communications with our French allies were not up to that standard,” she says. “When both of our robust Australian and French elections are concluded, a strong bilateral relationship will endure.”

Get daily updates on the climate summit that will shape our future. Sign up to our COP26 newsletter here.