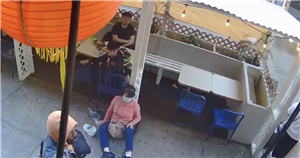 The suspect has been arrested and charged with assault as a hate crime and other counts, CBS New York reports.

Investigators say the suspect, Alexander Wright, was found with what looks like the drug K2. They believe the 48-year-old lives in a homeless shelter.

Video of the incident shows the suspect walking up to the 55-year-old woman and punching her so hard she falls to the ground.  Assemblywoman Yuh-Line Niou told CBS New York she was relieved to see some people rushed to the woman’s aid.

“My first thought was definitely wondering whether or not she was OK,”  Niou said.

Niou said while the assault was horrifying, it is important to see the growing number of attacks against Asian Americans in New York City. Crimes against Asians are up 353% since last year. There have been 86 total incidents in New York this year, compared to 19 last year, CBS New York reports.

This was just sent to me from my constituent. This just happened in my district in Chinatown. He has been arrested and our precinct is investigating. pic.twitter.com/sxNfCbrlza

“I cannot understand why people can’t just see that we are also human,” Niou said.

“When people hurt us, that causes permanent trauma. And that our communities are just as worthy to be able to live and work and be,” she added.

The incident is being investigated by the NYPD Hate Crimes Task Force. The victim was treated at a nearby hospital. She is expected to be OK.

The NYPD’s Asian Hate Crime Task Force, which launched late last year, is using outreach to combat the rising number of Asian American hate crimes and incidents in all five of the city’s boroughs, according to commander Tommy Ng. Anti-Asian attacks in the city, however, are “absolutely not new.” More cases are being reported due in part to social media and newer generations, he said.

“This is absolutely not new, but what makes Asian Americans be more vocal these days is we have more second or third generation Asian Americans being born in the United States, that we are part of America,” Inspector Ng told CBSN anchor Vladimir Duthiers last month. “We speak the language, we cultivate the American ways of life.”

In 16 of America’s largest cities and counties, there was a 164% increase in anti-Asian hate crime reports to police in the first quarter of 2021 compared to the same time period in 2020, with the number of reported incidents rising from 36 to 95, according to an analysis of police data by the Center for the Study of Hate & Extremism at California State University, San Bernardino.

New York City saw the largest spike in reports of anti-Asian hate crimes during that period, continuing a trend seen last year — attributed in part to rhetoric linking the coronavirus pandemic to Asian Americans. According to the NYPD’s Ng, the “common denominator” among perpetrators is mental illness.

Last month, two Asian-American women were walking near Times Square when they were approached by a suspect who struck one of the women with a hammer, CBS News reports.

In March, a 65-year-old woman in Manhattan was kicked to the ground and stomped on by a man who police say made “anti-Asian statements.” The same day, police said they were investigating after an Asian man was left unconscious during an attack in the subway. Both attacks were investigated as hate crimes.

Last month, Stop AAPI Hate, a national advocacy coalition, reported a total of 6,603 hate incidents nationally from March last year to March this year. The broad term can include hate crimes such as physical assaults but also incorporates verbal and online harassment, shunning and civil rights violations. Women reported nearly 65% of anti-Asian hate incidents nationally between March 2020 and March 2021, according the to data.