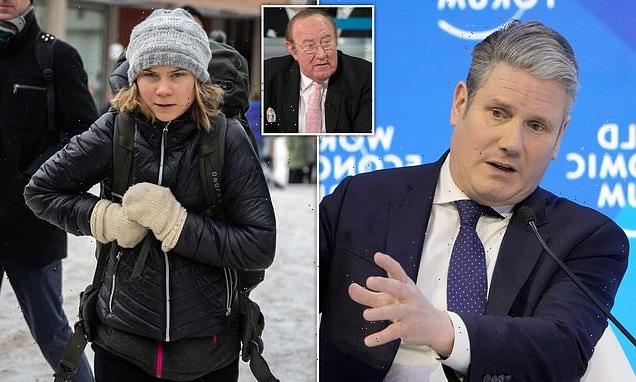 Labour leader Keir Starmer and his shadow chancellor Rachel Reeves strutted around the World Economic Forum (WEF) in the Swiss resort of Davos this week posing as the British government in waiting.

Given that the current Tory administration is still doing a convincing impression of being dead in the water, with Prime Minister Rishi Sunak’s attempts to revive it ending, so far, in failure or embarrassment (or both), Labour has every right to bill itself as the coming power. Even if the annual salute in the Swiss Alps to globalist billionaires, crony capitalism and corporate welfare is not the party’s natural habitat.

Starmer and Reeves said they went to reassure the world’s plutocrats that Britain would be very much open to business under a Labour government. But not, they quickly added, if you are an oil or gas company.

In yet another bout of the green virtue-signalling we’ve come to expect from most mainstream politicians on both the Left and the Right these days, they were adamant that Labour did not want any more investment in Britain’s North Sea oil and gas fields. 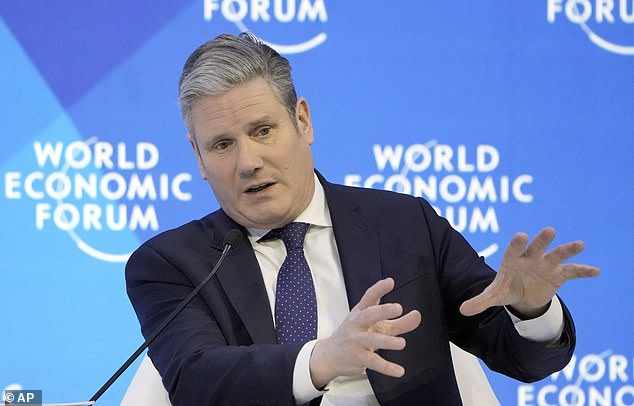 It’s not clear they’ve thought this through. Note, for a start, that Labour is not saying Britain won’t need or use any more oil and gas. Just that it won’t come from our own resources when the current fields run out, for no new licences would be issued. It is a bizarre position to take.

Even those who subscribe, as Labour does, to the net zero mantra — whereby all our power needs will eventually be met by clean, renewable energy sources — are forced to admit that we will need oil and gas, if in somewhat diminishing amounts, for the foreseeable future.

The boss of US megabank JPMorgan, Jamie Dimon, no stranger to bouts of virtue-signalling and wokery, bluntly told the WEF the world would need oil and gas for another 50 years and that not enough investment was being made in either if energy prices were to be reduced.

For example, as I write, 50 per cent of our electricity is being generated by gas, only 17 per cent by wind. Sometimes wind generates more, sometimes less. 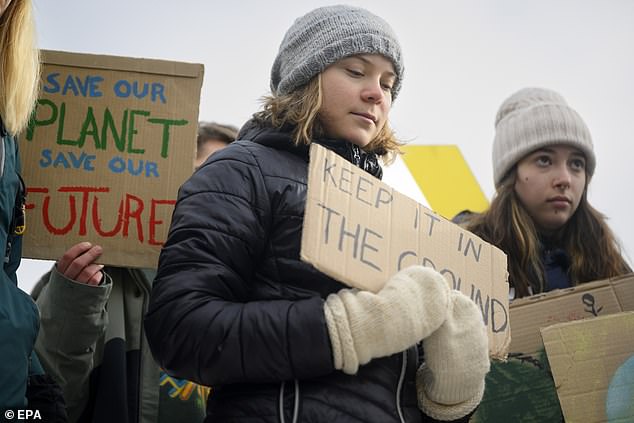 As Peter Mandelson, architect of Labour’s greatest election victories, has bluntly said: nobody is going to be thrilled at the prospect of Keir Starmer posing as the British Greta Thunberg

But even with the huge expansion of wind power envisaged by Labour and Conservatives, we will still need gas-fired stations to generate electricity when the wind is weak or isn’t blowing at all (which often happens during our coldest spells). And what’s left of our petrochemicals industry will need oil, from home or abroad, if it is to survive.

We already import over 60 per cent of our gas, at huge cost, as every household in the land knows only too well.

Under Labour’s plans that would hit 80 per cent by 2030 and 100 per cent sometime in the next decade, adding massively to our balance of payments deficit. Ditto with oil, which could be 70 per cent imported by the end of this decade, again at huge cost.

It is important to realise the economic consequences of this. It means billions of pounds pouring out of this country and into foreign coffers, often the slush funds of dictators. It means the demise of energy companies operating in the North Sea, sustaining British jobs and paying taxes to our Treasury.

Labour claims it’s the party of growth, but this will undermine its growth ambitions. If we are already running a growing balance of payments deficit because we are importing more and more of our oil and gas needs, then faster economic growth, which inevitably sucks in more imports of all sorts, will soon make the trade gap unsustainable — and a future Labour government would have to slam on the brakes, crippling growth in the process. 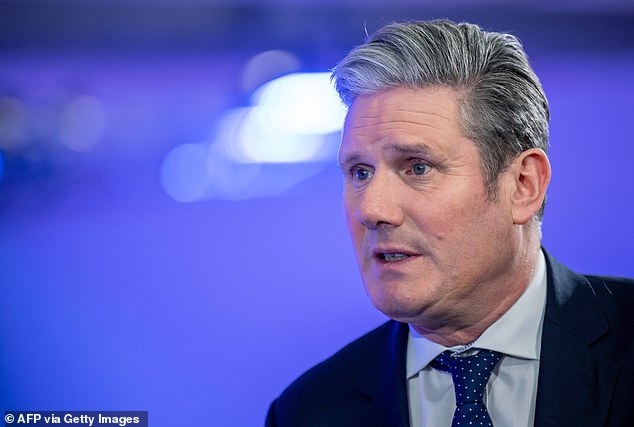 Labour has every right to pose as the next government and that’s what the polls indicate. But with that prospect comes the need for far greater scrutiny of how it proposes to govern, starting with its green agenda, since Starmer has placed that at the heart of how he intends to rule.

It isn’t just his new ban on oil and gas investments that is suspect. Labour’s green investment plans demand greater investigation too. Reeves has promised £28 billion a year for new green projects, on top of the infrastructure spending already planned by the present government, which is already running at historically high levels.

It has yet to be explained how this level of extra public spending can be undertaken when Labour is also committed to keeping a lid on the budget deficit and seeing the national debt decline as a share of our GDP in the years ahead. Senior Labour figures have admitted to me, off the record, that this is a circle that cannot be squared.

The prospect of hundreds of thousands, even millions, of ‘green’ jobs is fool’s gold anyway. The green revolution is overwhelmingly capital intensive. What few jobs it produces come about at great cost. Much of the technology and infrastructure is imported from abroad. If it results in higher energy costs all round, more jobs in existing businesses will be destroyed than those the green revolution creates. 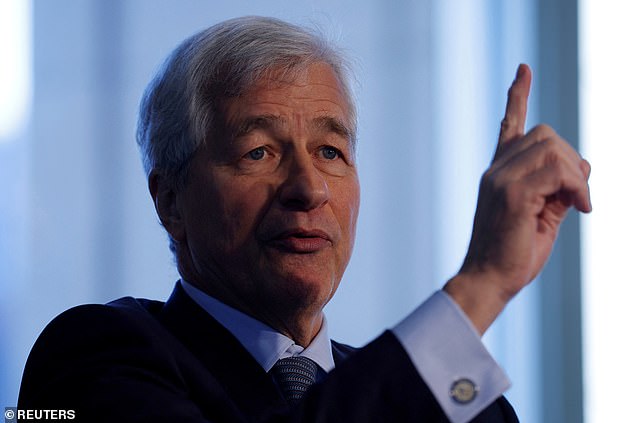 The boss of US megabank JPMorgan, Jamie Dimon, no stranger to bouts of virtue-signalling and wokery, bluntly told the WEF the world would need oil and gas for another 50 years

The trillion-euro cost of Europe’s green revolution — which pushed up energy prices even before the war in Ukraine — is already leading to the deindustrialisation of the continent. We are constantly told that the price of renewable energy is tumbling (or is about to). But renewable energy companies still rattle the state subsidy begging bowl when it comes to fresh investment.

There are many good reasons for a steady, careful transition to cleaner, renewable energy. Job creation is not one of them.

Fiscal realities will cramp Labour’s green ambitions. Starmer says he will not resort to a ‘big government chequebook’. That’s because the current Tory government has already exhausted it.

State spending is at record highs and most avenues to extra taxation have already been plundered, from reducing the threshold at which the highest income tax rate bites, to pushing an ever-increasing chunk of Middle Britain into a 40 per cent marginal tax rate that was never designed for them. Labour has been reduced to saying it would tax non-doms, foreigners who live in Britain but pay taxes on only their British incomes, not their worldwide earnings.

But taxing them is estimated to raise only £3 billion a year — peanuts in a country where the state now spends over £1 trillion a year — and even that assumes the non-doms don’t simply up sticks and leave for friendlier climes.

It’s an heroic assumption about folks who are rich and very mobile — and among whom the exodus is already under way.

More than 12,000 millionaires have deserted Britain in the past six years. Good riddance you might say — except that Britain’s tax base is now inordinately dependent on high-fliers who, for example, now pay the bulk of income tax revenues. Fewer millionaires means less money for nurses and teachers. 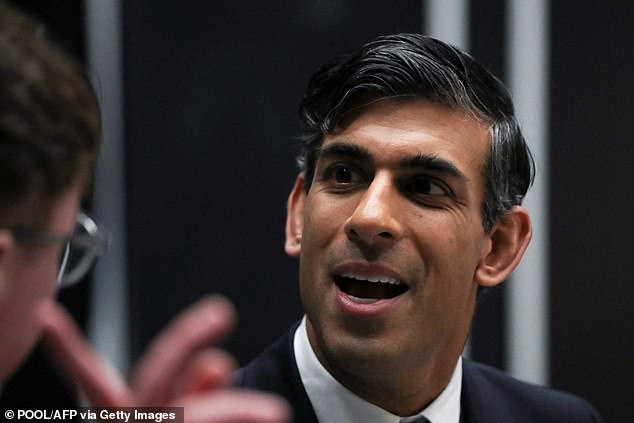 Even with the huge expansion of wind power envisaged by Labour and Conservatives, we will still need gas-fired stations to generate electricity when the wind is weak

Labour is paying the price for believing its own propaganda. For years it’s depicted the Tories as low-tax meanies. In reality, certainly since Boris Johnson’s big election victory in 2019, it’s been up against big government Conservatives who’ve taken tax and spend to new highs.

It is only now dawning on Starmer and his team how this will cramp the room for manoeuvre of a future Labour government. It is one reason why Starmer depends more and more on a radical green agenda for something to say, in the absence of more concrete proposals in other policy areas.

In Davos the Labour leader was wittering on about a ‘clean power alliance’ of committed ‘greenie’ countries to rival the fossil-fuel cartel Opec. Just who would be allowed to join was not mentioned.

Surely not China, which last year mined more coal than ever and is committed to a huge expansion of coal-fired power stations. Not India, which is doing the same. Or Germany, which is currently erasing villages to mine more lignite, the dirtiest of coal of all. Or America, which is churning out record amounts of natural gas — to keep Europe warm.

It is, of course, a nonsense, the sort of irrelevant musings you can afford in opposition but not in the harsh reality of government. Labour has come a long way under Starmer to be fit for government again. But it still has some way to go.

Vague or damaging greenery will not do the trick alone. As Peter Mandelson, architect of Labour’s greatest election victories, has bluntly said: nobody is going to be thrilled at the prospect of Keir Starmer posing as the British Greta Thunberg. Labour is clearly favourite to win the next election. But (dare I say it?), it will need more petrol in its tank to be sure of victory.