Suppose I were to explain that the series currently occupying the number one spot in Netflix’s Australian Top 10 is a trashy British drama about sex, class and politics. You might think, “Oh, Bridgerton, of course.”

But sadly, you would be wrong.

While Bridgerton remains immensely popular (the show is sitting at number two in Australia), all the current buzz belongs to Netflix’s latest water-cooler drama, Anatomy of a Scandal. 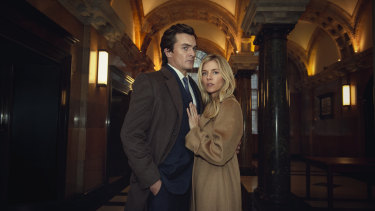 Tory minister James Whitehouse (Rupert Friend) was cheating on his wife (Sienna Miller), but is Whitehouse guilty of more than infidelity?Credit:Ana Cristina Blumenkron

The titular scandal centres on James Whitehouse (Rupert Friend), a handsome British MP who went to the right school, the right university and says all the right things. “I take the safety of my constituents personally,” beams Whitehouse when an elderly lady visits his office to complain about pedestrian crossings.

Seemingly untouchable, Whitehouse’s charmed life comes undone when news breaks that he has been having an affair with a researcher on his staff, Olivia (Naomi Scott). That revelation is enough to crush his supportive wife, Sophie (Sienna Miller), but things go from bad to worse when Olivia accuses Whitehouse of rape, and he must stand trial. Here we meet Kate Woodcroft (Michelle Dockery), the QC in charge of prosecuting the MP, who appears to have secrets of her own.

Based on Sarah Vaughan’s novel of the same name, the six-part limited series offers a kind of paint-by-numbers approach to making a hit TV show. Cast a couple of familiar faces in Miller and Downton Abbey’s Dockery, include at least one major twist and don’t forget to add a dash of sex (plus a pinch of privilege).

So, how does a stock-standard drama bump Bridgerton off the top spot and become the most talked-about TV show in the world? Allow me to break down the brushstrokes.

It all looks so lovely: The cast, their clothes, London

Never underestimate the appeal of attractive stars swanning around a highly polished version of a familiar European city while dressed immaculately. Friend is painfully good-looking as Whitehouse, his mop of perfectly coiffed hair only outdone by his impressive range of overcoats.

Equally genetically blessed is Miller, whose character Sophie has become an overnight style icon. It’s been a week since the show dropped on Netflix, and already the internet is populated with “Where to shop Sienna’s Anatomy of a Scandal outfits” articles. Apparently, her roll neck look is very popular – so, too, is the camel coat. 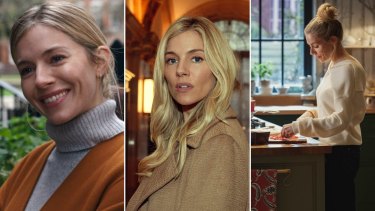 Sienna Miller as Sophie in the Netflix series Anatomy of a Scandal defines soft power dressing with rich fabrics, neutral tones and the strategic use of white.Credit:Netflix

Then there’s Anatomy of a Scandal’s London, which is worlds away from Luther’s London, Top Boy’s London or even Fleabag’s London. In much the same way Emily in Paris serves up a sanitised city of love, Anatomy turns London into a playground for the posh.

Characters drink and dine at Michelin-starred eatery The Delaunay, rather than smashing beigels on Brick Lane. Council estates are nowhere to be seen. Instead, everyone lives in delightful townhouses and gets driven to work by a private chauffeur rather than having to ride the tube.

We may lie to ourselves and pretend that we have a complex cultural palate, but right now, all we want to watch are different versions of the one show: rich, white people behaving badly.

From Succession to Ozark and The White Lotus, the trend is undeniable, and if anyone is going to pick up on the pattern, it’s TV veteran David E. Kelley. This probably explains why many of his most recent adaptations, including Big Little Lies and The Undoing, have focused on uber-wealthy characters committing unspeakable acts. See also: Nine Perfect Strangers. 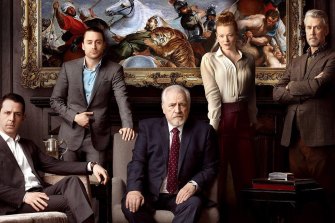 Rich white people behaving badly? Sounds like the recipe for a hit.Credit:HBO

For Anatomy of a Scandal, Kelley teamed up with House of Cards (another show that fits the bill) showrunner Melissa James Gibson to create the ultimate catered viewing experience.

The story is timely and depressingly familiar

A prominent politician accused of sexual assault within the corridors of power might have once seemed like an edgy pitch for a TV drama, but at this point, it feels like an extension of a conversation we’re already having.

Political discourse around privilege and abuse of power has never been greater and audiences are voyeuristic at the best of times. When a series comes along that dramatises the news cycle, it can be hard to watch but even harder to look away.