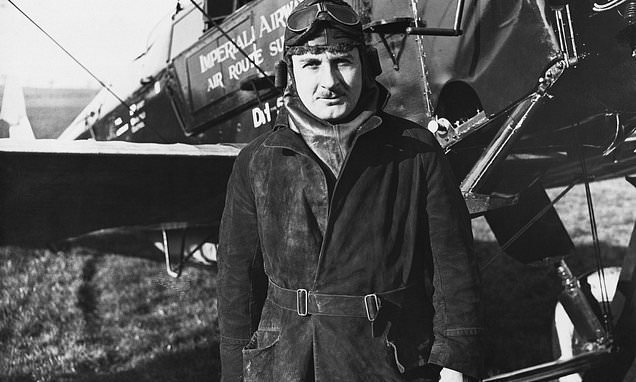 ALEX BRUMMER: As corporate vultures swoop on aerospace giant Cobham, we must win this dogfight for a firm ‘Biggles’ built into a British high-flyer

An estimated one million people watched as an intrepid aviator landed his plane on the River Thames in 1926, having travelled to London ‘by way of Australia’.

Alan Cobham was rewarded with a knighthood from George V, set up an aerospace and defence group and is believed to have been a model for the fictional character Biggles.

Today, almost 100 years later, the opening pages of the annual report for thriving Dorset-based company Cobham capture that exhilarating sense of derring-do as well as more recent space missions to the Moon, Mars and beyond.

The firm is at the heart of a UK aerospace sector recognised globally for its avionics, technological expertise and innovation — and, particularly, its mid-flight refuelling systems. From America’s F-35 fighter jets to Airbus airliners, there is scarcely an aircraft not fitted with equipment invented or designed by Cobham. 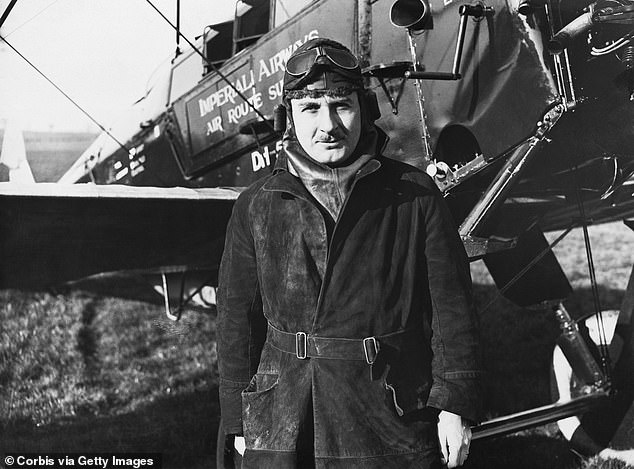 Sir Alan Cobham stands beside a propeller aircraft in 1926. He set up an aerospace and defence group and is believed to have been a model for the fictional character Biggles 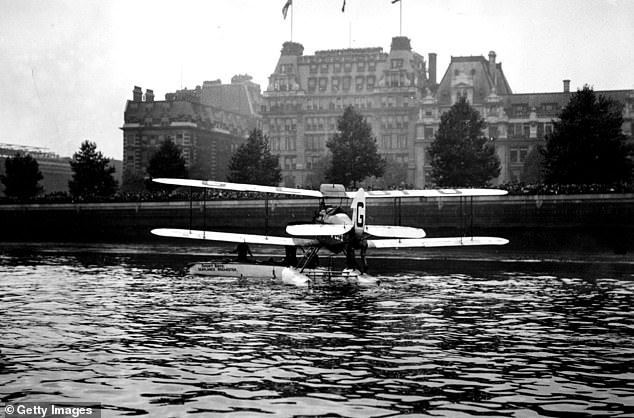 An estimated one million people watched as intrepid aviator Alan Cobham landed his plane on the River Thames in 1926 (pictured), having travelled to London ‘by way of Australia’

But the company’s future is under serious threat after a £4 billion bid from a U.S. private equity consortium.

It is an issue of huge national importance, at a time when Brexit is in the balance and Britain’s industrial future is said to be in jeopardy.

Crucially, all major analysis of this country’s competitiveness shows that aerospace, finance, pharmaceuticals and the creative industries ought to be vital drivers of Britain’s prosperity.

Cobham holds a special place in this pantheon.

The firm was launched by Alan Cobham, an RAF ace pilot, when, eight years after landing on the Thames, he founded Flight Refuelling in Sussex, facilitating the first non-stop flights across the Atlantic on the eve of World War II.

Cobham’s air-to-air refuelling equipment was integral during the Falklands War.

Recently, the company has had its troubles. But because of its key role in the aerospace industry and the value of its patents, research, development and science, investors injected £500 million of new capital two years ago. Now, the £4 billion takeover bid will test the Johnson government’s willingness to protect this jewel in Britain’s industrial crown from a foreign predator.

At a moment when confidence in the pound is low and share prices on the London Stock Exchange lag behind other major markets because of Brexit uncertainty, private equity fund Advent has pounced. It has reached a closed-door agreement with a spineless Cobham board.

The proposed deal is hitting heavy turbulence. The company’s biggest investor opposes it. But most significantly, the Cobham family, which still has a stake in the group, ferociously defends its heritage and is in open revolt against the sell-out.

Nadine Cobham, wife of former chief executive Michael Cobham, who used to run the group and is the son of the legendary Alan, has written to Defence Secretary Ben Wallace and Business Secretary Andrea Leadsom demanding they stop the bid on the grounds of ‘national interest’. 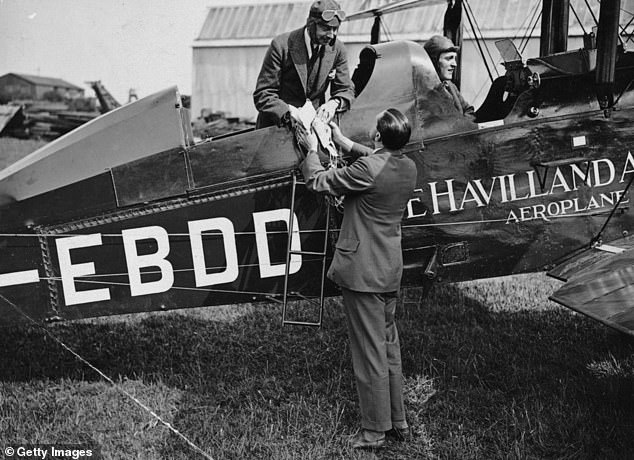 SAviator Alan Cobham in talks to his assistant on June 1922. He was rewarded with a knighthood from George V 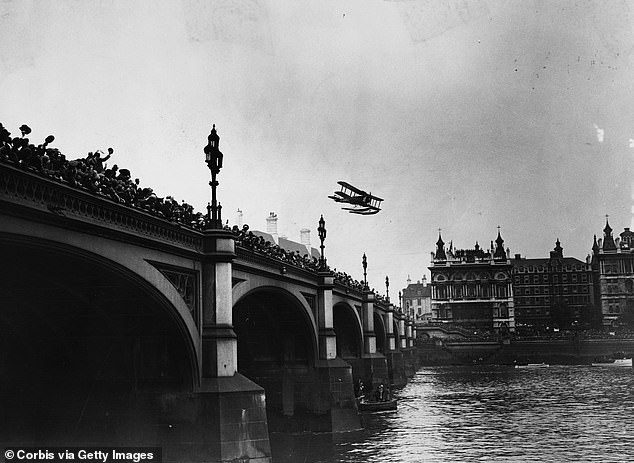 After flying over the River Thames in 1926 (pictured), Alan Cobham set up an aerospace and defence group

Lady Cobham, who owns a 1.5 per cent stake worth a potential £60 million, argues the company has ‘turned around’ and described the offer by the private equity vultures as ‘opportunist.’

For his part, Cobham chief executive David Lockwood denies his firm has rolled over.

He says: ‘The UK is the most open defence market in the world. Not only do we have foreign-owned companies but the Air Force is largely equipped with foreign equipment.’

He failed to mention that the UK’s biggest defence contractor, BAE Systems, and civil aviation giant Rolls-Royce, are formally insulated from overseas ownership.

Make no mistake, Advent’s bid to snatch Cobham is a serious threat to the firm’s future as a global aerospace champion.

Private equity has a terrible record of taking on well-run companies, axeing jobs, closing headquarters, cutting research and development budgets and building up debt as they seek to extract as much value as quickly as possible.

It is no surprise that the ADS Group, which represents more than 1,000 UK aerospace, defence, security and space sector businesses, is calling for the Government to intervene.

This issue does not just affect the aerospace industry.

Private equity firms are running — or ‘running down’ — a host of businesses and are insufficiently monitored by stock market authorities or the Government.

A notorious example of how things can go wrong was when British Steel collapsed under its owner, investment firm Greybull — which had a reputation for buying companies cheaply, milking them for cash, then abandoning them.

Unsurprisingly, there has been widespread criticism of Cobham chairman Jamie Pike, who is renowned for selling companies he heads, after he compliantly signed up to the Advent deal before revealing it to the stock market.

Cobham’s biggest shareholder, Mayfair-based Silchester International Investors, has been particularly vocal, saying the firm is being sold too quickly and too cheaply.

There is a very powerful case for government intervention.

Cobham’s importance to Britain’s industrial infrastructure is similar to that of GKN, the country’s oldest engineering firm, which was bought last year by Melrose Industries, a firm with a reputation for asset-stripping.

Melrose was only allowed to buy GKN after agreeing with the Government that it would not sell any of the aerospace operations for at least five years. This was a recognition of the former Spitfire manufacturer’s importance to the UK’s thriving aerospace industry. 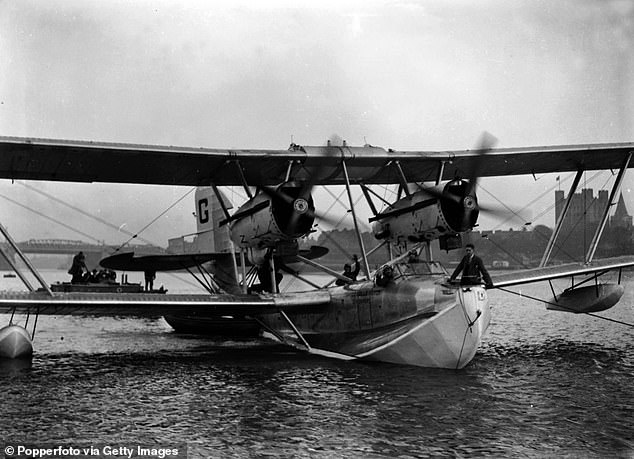 Sir Alan Cobham and his wife Lady Cobham are rowed out to their plane in a boat, in order to begin their 20,000 mile flying tour around Africa 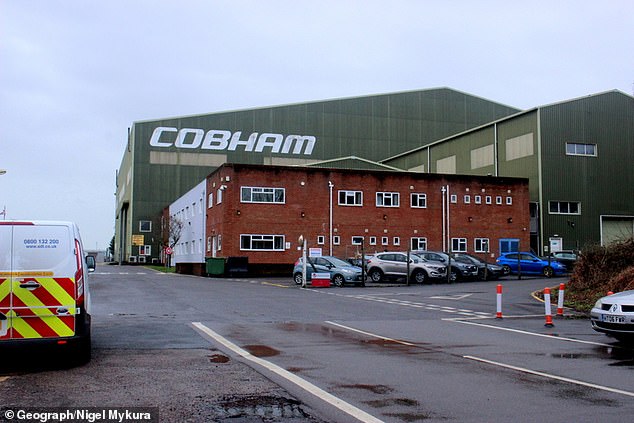 Cobham is at the heart of a UK aerospace sector recognised globally for its avionics, technological expertise and innovation

In the case of Cobham, Advent, with the support of private equity outfit Blackstone, set about wooing the Wimborne-based company with a PR campaign.

It swooned about how Cobham’s ‘technological excellence, product innovation and its trusted partner status has established it as a market leader in its defence, aerospace and space markets.’

The truth is Cobham’s ‘technological excellence’ is the very reason why its sell-off would be a devastating blow. For there would be no guarantee that new foreign owners would not sell it off piecemeal.

Cobham employs 10,000 skilled people across the globe and has customers and partners in more than 100 companies worldwide. It works closely with the Ministry of Defence and the Pentagon.

As is almost always the case with such takeovers, big financial carrots have been dangled in front of the incumbent management to sell.

Chief executive David Lockwood stands to collect up to £6.4 million if the deal goes ahead. Finance director David Mellors would be in line for £3.9 million.

The future should be very bright for Cobham as an independent company.

It is the trusted provider of communications technology that makes connections in the most complex, harsh and hazardous circumstances.

Its Fliteline radio systems are used by the U.S. Coastguard, the U.S. Department of Homeland Security and search-and-rescue services across the world.

Cobham has also provided the microelectronics for space exploration for the past three decades, including the Insight mission, which has travelled to Mars.

Much of the avionics on the Airbus A320 airliner — including radio and audio systems, clocks, lights and communication equipment — is supplied by Cobham.

Allowing Cobham to fall into the hands of private equity predators, with little understanding of its venerable history, would be a disgraceful act of national corporate vandalism.

This is a battle that Biggles, who defeated the Germans in two World Wars and foiled a Russian invasion, would have relished.