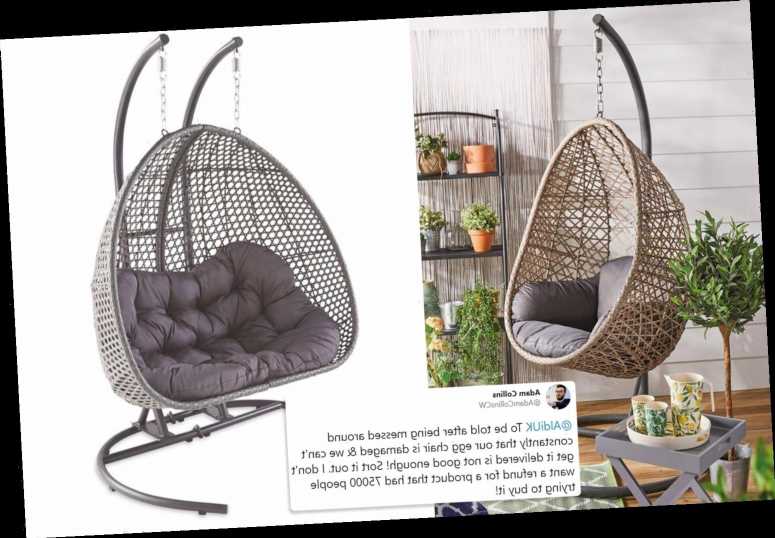 ALDI customers who bought the sell-out, hanging egg chair have been left furious as deliveries are delayed, missing parts or damaged.

Some customers have even lost out altogether with chairs they queued and paid for online not being delivered at all.

Both chairs were a smash hit with fans joining queues of 75,000 people to get their hands on one.

But many people were ultimately disappointed as every time the chair goes on sale it sells out in just hours.

Now, it appears that even successful shoppers have been let down as chairs have been damaged on delivery or even gone missing altogether.

Frustrated customers have Tweeted at Aldi looking for explanations around the poor delivery service.

Those whose chairs have been delivered shared pictures of battered boxes and broken parts.

Diana tweeted: "Received my Aldi egg chair today, no parts to put it together and this was how it was left in my garden #aldieggchair #shocking."

"I’ve managed put it together, could not be bothered with the rigmarole of sending it back.

"Aldi were great though and issued a partial refund. Managed to repair it and it’s not too noticeable."

And Tracey added: "I got my single one about three weeks ago, unfortunately none of the fittings were on the box so… can’t use still. Waiting for the fittings to be sent from Germany."

This issue has affected several customers with many saying they are facing further delays while they wait for the missing parts to be sent on.

Ali tweeted: "Mine came with the packaging ripped to shreds and missing items seven through to 21… luckily they have a phone number to call for missing parts… oh wait that doesn't even work…"

Broken boxes and missing parts is just the tip of the iceberg for Aldi – several customers have also flagged up that their are orders not being delivered at all.

Adam tweeted: "To be told after being messed around constantly that our egg chair is damaged and we can't get it delivered is not good enough! Sort it out.

He told the Sun that despite queuing up and paying for the chair he's yet to see  any sign of it, and the customer service response has been confusing at best.

He said: "After staying up to the early hours and beating 75,000 other Aldi shoppers to secure an egg chair, we thought the hard part was over.

"Initially, everything went fine, XDP confirmed a delivery date and time but the product never arrived. That's when things started to get concerning.

"XDP refused to talk to Aldi customers and Aldi didn't have a clue what was going on.

"We continued to chase Aldi and we were told we would be called back multiple times by XDP, but nothing."

WHAT TO DO IF YOUR ALDI CHAIR IS DAMAGED OR MISSING

IF you've bought an Aldi egg chair and it hasn't arrived or parts are damaged here's what to do:

Customers with any queries should contact Aldi customer services for help
Those with a damaged or missing product are entitled to either a full or partial refund.
Unfortunately, the product is now out of stock and therefore Aldi is not able to offer replacements.

Now, the supermarket has said that his order has been damaged in delivery and won't be coming at all.

Despite this, the discounter isn't offering a replacement, but is instead doing a refund.

That means Adam won't get the chair after all and will be forced to rejoin the queue if and when the chairs are on sale again – with no guarantees of actually getting one.

"This seemed odd considering XDP and Aldi were happy to deliver many packages damaged or with missing parts to other customers.

"Aldi has refused to fix or deliver the item, I'm confident the egg chair doesn't even exist.

"Needless to say, we are gutted. The only advice Aldi could offer was to download their app and turn on notifications for the next release date, oh and a £10 voucher for our troubles."

XDP is one of the companies tasked with delivering Aldi egg chairs.

The chairman told The Sun that the company has experienced a 70 per cent uplift due to coronavirus at the same time that many employees have been unable to work.

He explained that while new contractors have been hired to manage the extra parcels, these are often less well-trained and efficient than permanent staff.

He said that some of Aldi's Special Buys are not designed for carrier delivery, and that the packaging is insufficiently sturdy to keep things safe.

But he acknowledged that carrier damages do sometimes happen.

He clarified that customers who are worried about delays or damages should contact Aldi rather than the delivery company.

An Aldi spokesperson said: “We are committed to providing a reliable and efficient delivery service for all our customers.

"In light of Covid-19 our delivery partner has faced significantly increased demand.

"We are working closely with them to resolve any concerns raised and to prevent future issues.”