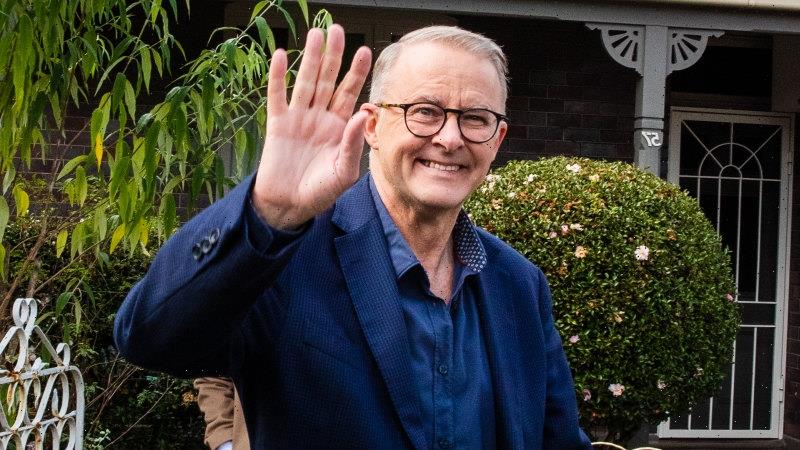 Prime Minister-elect Anthony Albanese is poised to reshuffle his frontbench after voters rejected a key member of his leadership team in Kristina Keneally while his environment spokeswoman Terri Butler is expected to lose her Brisbane seat.

Albanese and his senior leadership team will be sworn in on Monday, as he and Foreign Minister-elect Penny Wong prepare to fly to Tokyo on Tuesday for the Quad security talks with the leaders of US, Japan and India. 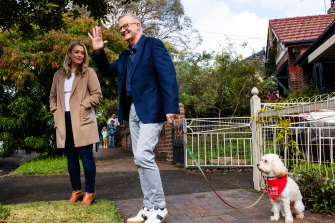 Prime Minister-elect Anthony Albanese, with partner Jodie Haydon and dog Toto, will likely have to fill two vacancies on his frontbench with Kristina Keneally and Terri Butler poised to lose their seats.Credit: Edwina Pickles

Deputy leader Richard Marles will also be sworn in as a member of the executive on Monday, as will Jim Chalmers and Katy Gallagher as treasurer and finance minister respectively.

As Albanese visited a library near his home in Marrickville on Sunday, he said the ministerial positions would be divided among the leadership team on an interim basis until the caucus can meet to determine frontbench spots, which is expected to occur the week of May 30.

“All of the portfolios have been worked out as an interim arrangement with the Department of Prime Minister and Cabinet, because you can’t have a circumstance whereby there aren’t ministers. So they’ll all be sworn into multiple portfolios tomorrow,” Albanese said.

He said the Quad leaders’ meeting was “an absolute priority for Australia” and he would have one-on-one meetings with Japanese prime minister Fumio Kishida, US President Joe Biden and Indian Prime Minister Narendra Modi.

Speaking on ABC Insiders on Sunday morning as Labor sat on 71 seats, with more than 60 per cent of the vote counted and a slew of seats still too close to call, Marles said Labor remained bullish it would form majority government.

“I think there is a bit of counting to go, and we are hopeful that we can achieve a majority in our own right,” Marles said.

“The point that we’ve made all through the campaign is that what we are taking to the Australian people is what we will take to the parliament, so there is not going to be any deals in forming government.”

But he declined to weigh in on speculation that he will seek to move to the defence portfolio. As deputy leader, Marles can choose his preferred portfolio and confirmed he had spoken to Albanese about it but said “I’m not about to reveal it now”.

“I think I’ll be getting off on the wrong foot with my leader, if I was about to pre-empt what is obviously his announcement and so I’ll leave that to him in due course,” Marles said.

With Keneally and Butler almost certainly out of the parliament, there are two ministries up for grabs and the left and right factions would likely seek to secure one apiece. Labor sources, speaking on the condition of anonymity, said there would be a strong push for women to fill the two vacancies. On the left, NSW senator Jenny McAllister was floated as an option, as was Queensland Senator Murray Watt, while the strength of Labor’s results in WA could put Perth MP Patrick Gorman in the frame for promotion.

The shock loss of Keneally in Fowler, who is almost certain to lose what was a safe Labor western Sydney seat to independent Dai Le, will create a vacancy in the Home Affairs portfolio and is set to prompt soul-searching about the wisdom of parachuting in candidates over local grassroots members.

Marles was reluctant to declare Keneally’s political career over, as he was pressed on whether another seat would be found for her in the Parliament in the future.

“Kristina Keneally has been a wonderful servant of the Labor Party. We will continue to scrutineer the result in Fowler. We have our fingers crossed but we’ll see how that plays out,” he said.