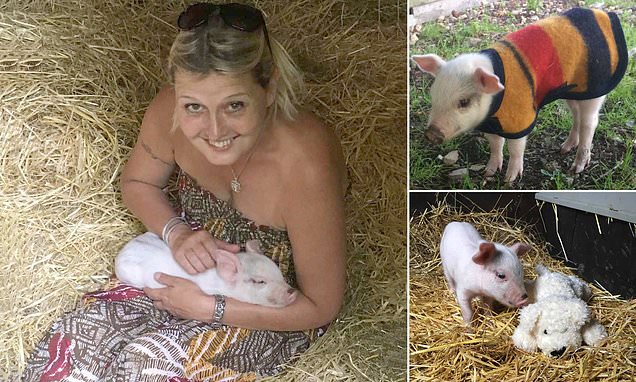 When a vegan campaigner was told about a little piglet which had fallen out of a truck on the way to the abattoir, she decided to go the whole hog – and save its bacon.

Lisa Buck, 48, from Diss, Norfolk, adopted the piglet after her son, Ellis, 24, called her 10 days ago to say it had been found abandoned on the roadside.

The tiny piglet, called Peggy, now lives with her family and she says that Peggy loves nothing more than to watch TV and hog blankets in the family’s living-room.

However, Lisa may have to rethink their living arrangements soon – as the little piglet could soon weigh up to 40 stone and grow to 7ft long. 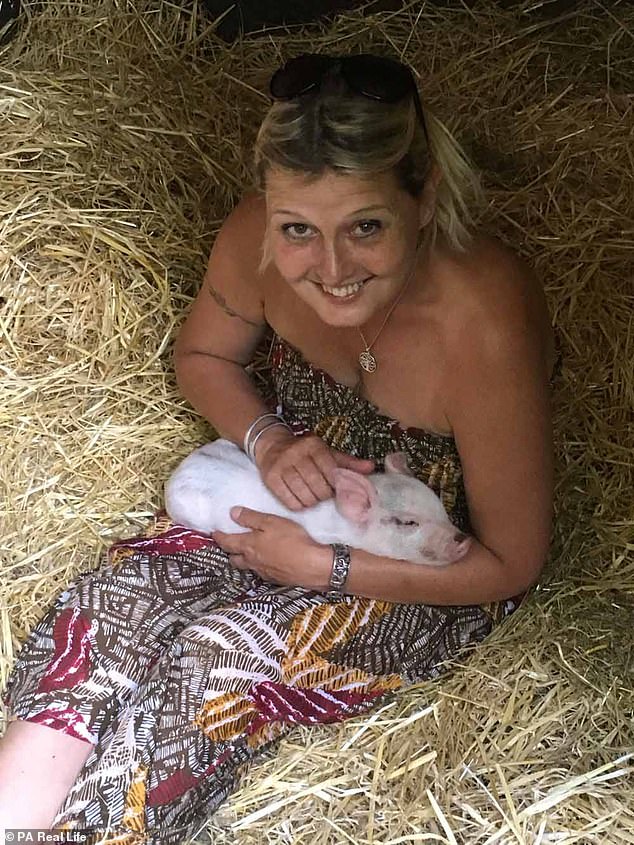 Lisa Buck, 48, from Norfolk, rescued a piglet that fell from a truck and kept it in her house. She said Peggy (pictured) had become a real part of her family 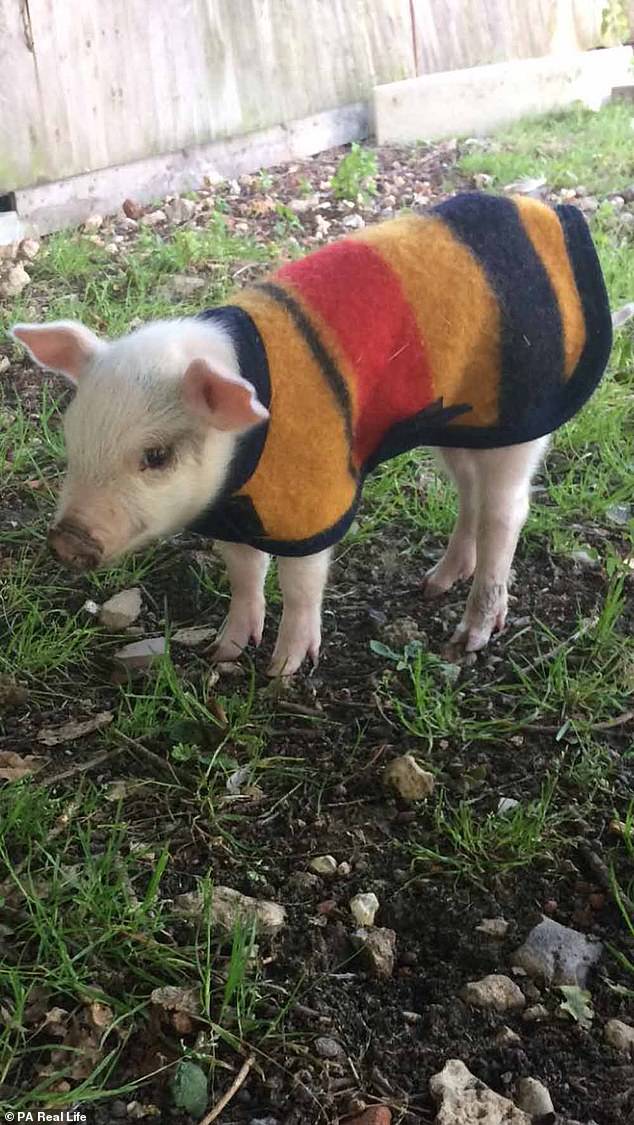 Peggy in her little coat. Lisa said she didn’t want to force the piglet into being a pet, but after spending one night outside by herself, Peggy decided to make Lisa’s house her own 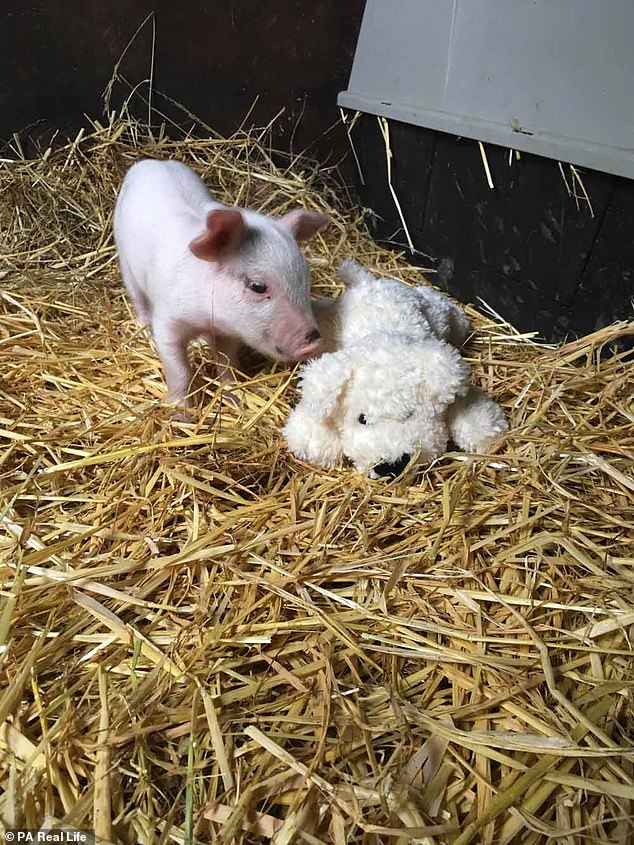 Piglet and cuddly toy. The day after she rescued Peggy, Lisa applied for a permit to keep a pig with the Department for Environment, Food and Rural Affairs (Defra)

The vegan pasty maker and founder of The Vegan Ow, said: ‘The day before Ellis called me, I was driving along the A12 near my home and spotted a transport truck full of pigs.

‘Realising they were on their way to the abattoir, I was grief stricken all day.’

‘Then, when Ellis called the next morning, I knew it was fate. It sounds crazy, but I honestly believe the universe wanted me to take in this poor, abandoned piglet.’

No stranger to rescuing lost and wounded animals, Lisa, who has been married to Bill, 53, for 16 years, has spent much of her adult life taking in injured birds and helping them to recover, before releasing them back into the wild.

‘There’s a local group in the community that fosters injured wildlife in the area,’ she said. 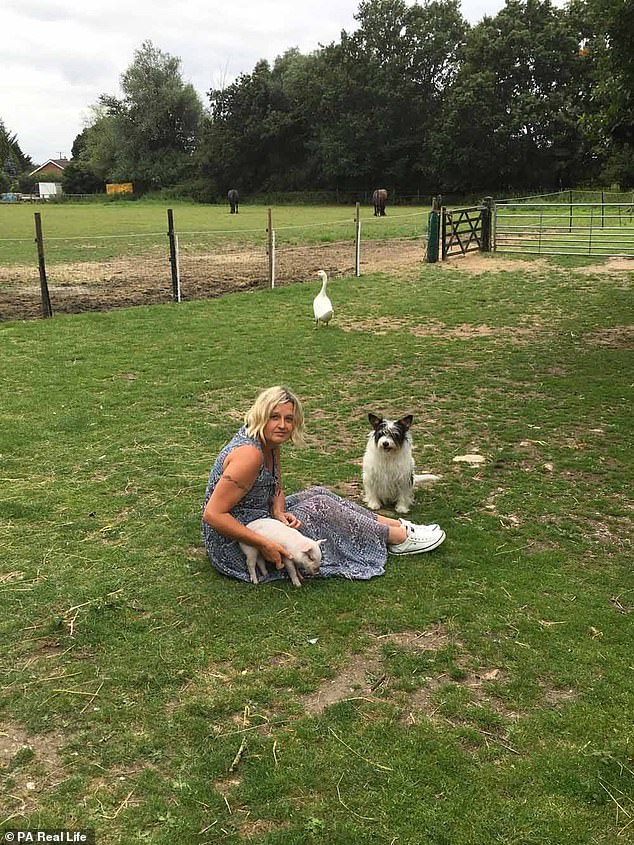 Lisa with Peggy and her dog Eddie in the garden. She explained the piglet really liked to cuddle on her lap 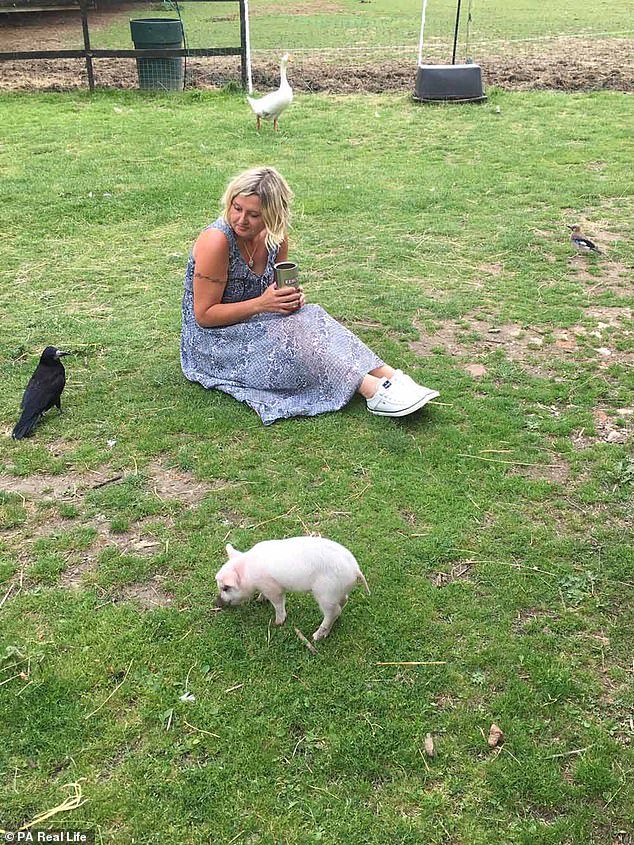 Peggy happily surveys the garden as Lisa sits next to her. Lisa said she ‘fell in love’ with Peggy after swaddling her in a blanket

So, when her son phoned with the news that a family friend, Jak Kerry, 26, a farmer’s son, had found an abandoned piglet, it came as no surprise to family and friends when Lisa offered to give the porker a home.

Calling the Department for Environment, Food and Rural Affairs (Defra) that morning to apply for a county parish holding (CPH) number, which is needed to keep a pig, Lisa introduced Peggy the piglet to her other four-legged friends – bulldog Ernie, and ‘mixed heritage’ terrier Eddie.

‘As soon as I got the go ahead from Defra, I headed over to pick up Peggy from Jak’s house,’ she said. 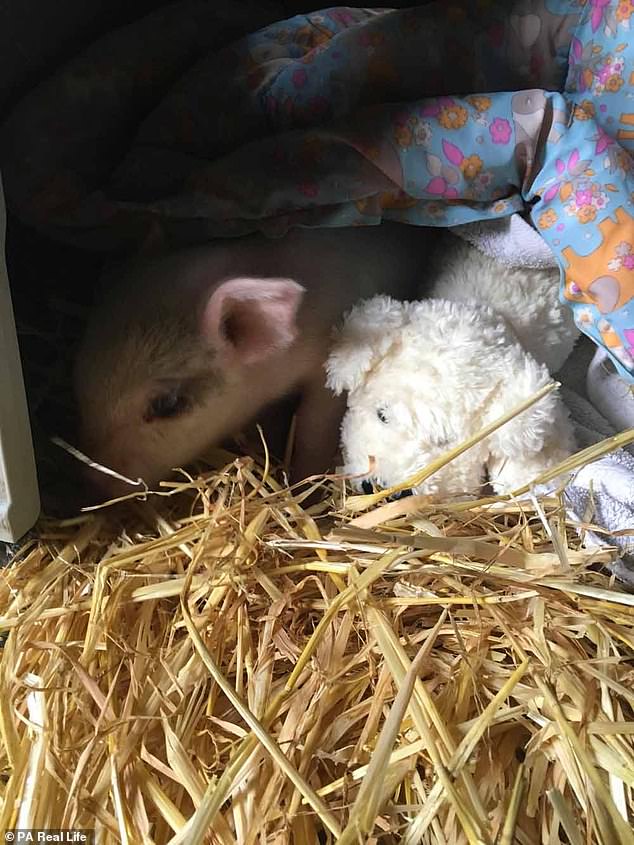 Peggy with her cuddly toy under a blanket. Lisa said the piglet joined her and her husband in front of the TV 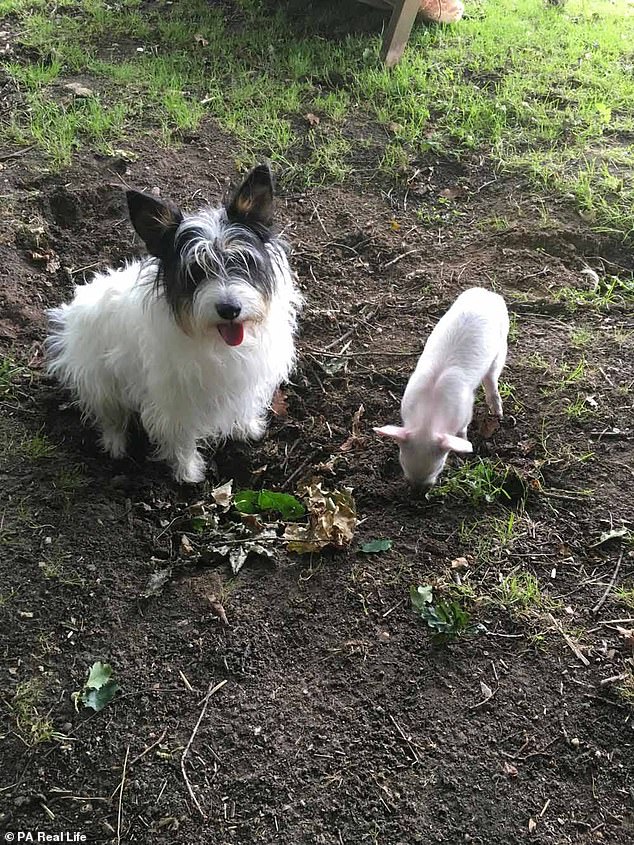 Eddie and Peggy together outside. Lisa said she wanted the piglet to be happy and sad there would always be room for her at the house

‘I’d brought some blankets with me, swaddled her up and she fell asleep in my arms within seconds – I fell in love with her there and then.

‘I tried to find out where she had come from by calling around farm contacts, but it remained a mystery, so I thought it was safe to keep her.’

Lisa, who was vegetarian for four years before becoming vegan in 2015, spent the rest of the day ensuring the outhouse was fully kitted out for Peggy – her pig in a blanket.

‘I didn’t want to push Peggy into being a pet,’ she said. ‘I wanted her to feel comfortable doing whatever her natural instincts told her to do.’ 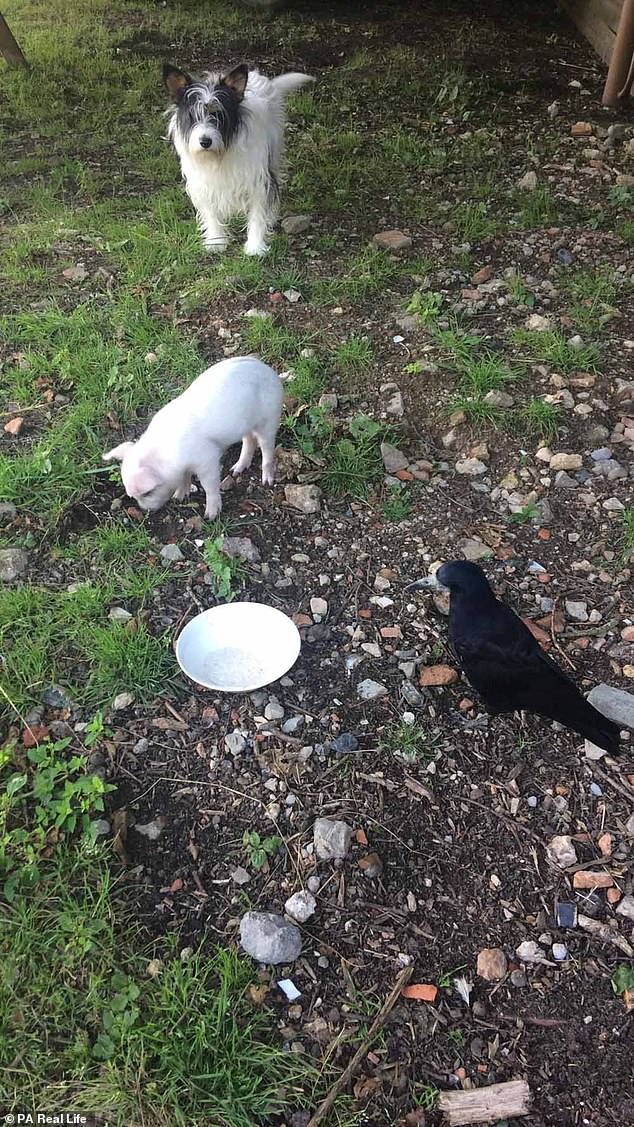 Eddie surveying’s Lisa’s garden with Eddie. Lisa said she had sheltered plenty of birds before and thought she could shelter Peggy

But, deciding that sleeping outside was a ‘boar,’ the next morning Peggy, who is fed on a diet of organic oats and goats’ milk, was hot to trot.

‘She was grunting at the door, desperate to get in, and before we knew it, she was running around the house exploring,’ laughed Lisa, who estimates her piglet is less than two-months-old.

‘She really is like a newborn baby and brings out all my maternal instincts. She sleeps, eats, and will occasionally kick about a bit before drifting back off.

‘The only difference is, she’s a lot cleaner than a human baby. In fact, I’m amazed that she needed no house training whatsoever.

‘Straight away she took to using one spot outside to do her business.’ Despite her plans to build a paddock for Peggy in an annexed piece of land, Lisa thinks she fancies herself as more of a house hog. 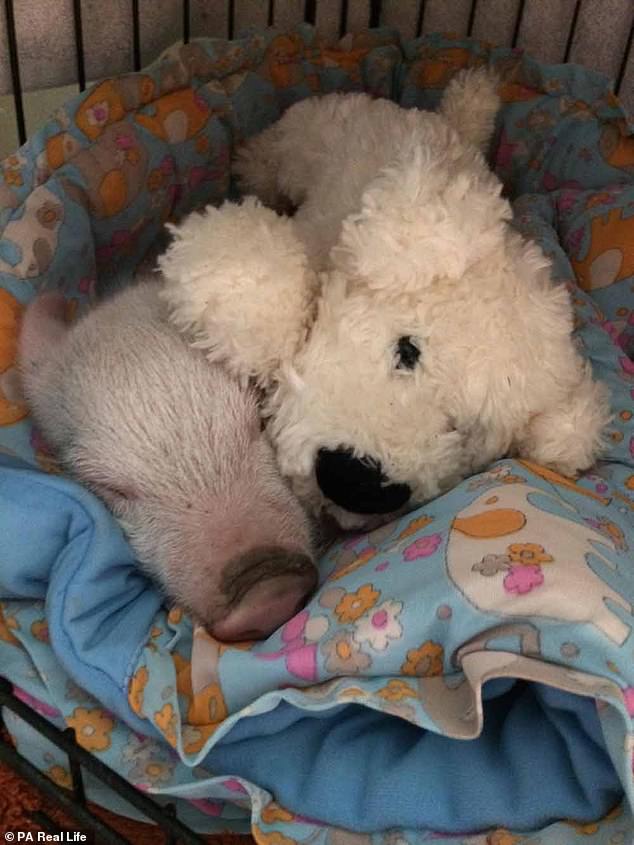 Peggy in her bed with the cuddly toy. ‘Luckily the only kind of sausage anyone will be eating here will be plant based vegan versions,’ Lisa said

‘She’s already showing a desire to be domesticated, and I’m happy for that to be the case, as long as that’s something she has chosen herself,’ said the animal lover.

‘It doesn’t mix with my ethics to force a farm animal to adopt the life of a pet. I think there needs to be a choice.’

But Peggy seems to have set her sights on living like her four-legged doggy friends and is already happily hogging blankets and making herself at home.

‘On her first night, my husband and I were sat watching Death in Paradise on TV when Peggy came grunting in, tugging at the blanket we had over us,” said Lisa.

‘The next thing I knew, she’d jumped up on the sofa and was nestling in my lap. It’s been the same every night for the past week.’

Still, Lisa and her family are only too happy to welcome the porker into their family. She said: ‘There’ll always be a home here for Peggy.

‘We just want her to live out her natural life without ever having to be in fear, like she must have been on that terrible day when, we assume, she was off to the slaughterhouse. 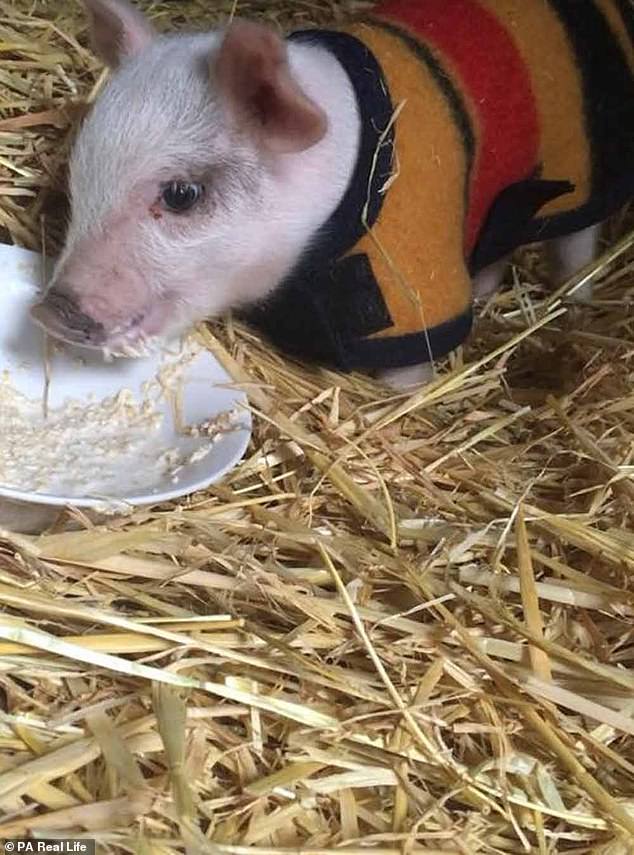 ‘Luckily, the only kind of sausages anyone will be eating here will be plant based vegan versions.

‘She already feels like part of the family and, really, she’s a lot less trouble than the dogs – she doesn’t moult, and she never makes a mess inside, even if she’s been in all day.’

But while Peggy is currently smaller than Lisa’s pooches, she is likely to grow to seven feet long and weight up to 40 stone.

‘I’m well aware just how big she’s going to get, but that’s fine, we live in an old farm house – so we have the space,’ she said.

‘Although, if she’s going to insist on watching telly with us every night, we might have to get a bigger armchair, in fact, it might be best if she got her own sofa!’