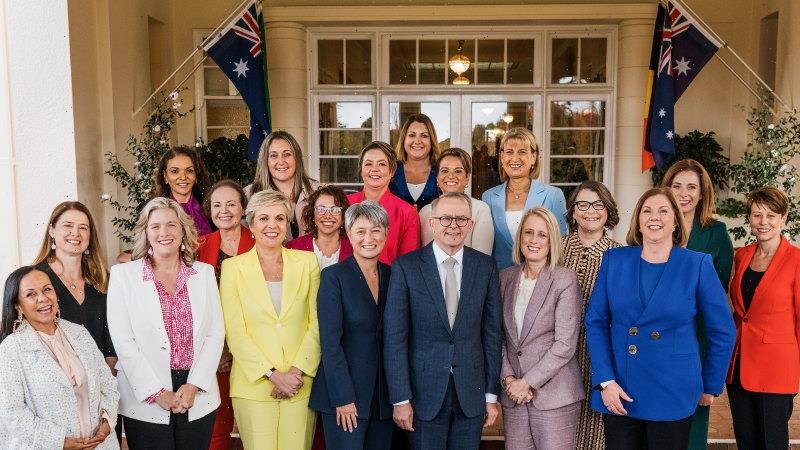 History has a way of moving in fits and starts. After a period of Australian politics when progress on gender equality appeared to stall, followed by an election in which the treatment of women was a defining issue, the female line-up in Prime Minister Anthony Albanese’s cabinet and outer ministry is welcome. It’s a sign that the long-held policy aim of having more women in politics is becoming a reality.

A record 10 women were sworn in yesterday to Albanese’s cabinet, eclipsing former prime minister Scott Morrison’s record of seven, and another three women were appointed to the seven-member outer ministry, for a total of 13 female ministers in the 30-member executive. It is a pity that the party that has long had rules geared to achieving 50 per cent female representation does not quite have half of its ministers female, but this is a big step in that direction. 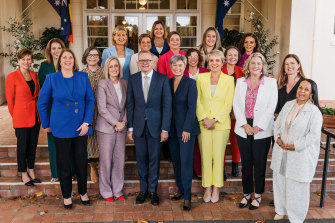 The inclusion of so many women today has been many years in the making. Credit should be given to the likes of the late former Victorian Labor premier Joan Kirner, who was an early advocate for gender equality in politics, and was instrumental in forming the Emily’s List ginger group. Labor adopted a quota system in 1994 that ensured a certain percentage of women were given preselection.

It is often argued, particularly on the conservative side of politics, that quotas run counter to a merit-based system that ensures career promotion is based on the quality of a candidate, not criteria such as gender, race or religion. But Labor’s system has preselected the likes of Penny Wong, Tanya Plibersek, Katy Gallagher and Clare O’Neil, all seasoned and competent politicians, and many others. There is no evidence here that quotas have diminished the quality of Labor’s talent pool.

Albanese’s cabinet is more diverse in other ways too. Ed Husic, the new minister for Industry and Science, and Anne Aly, now the minister for early childhood education and youth, will be the first Muslims in an Australian ministry. Indigenous representation will also be strengthened by Linda Burney, who will be the first Aboriginal woman to sit in the cabinet, assistant minister Malarndirri McCarthy and Pat Dodson, who will be a special envoy for the Uluru Statement from the Heart.

This burst of firsts does not translate to a lack of experience. Albanese’s senior team have spent more time previously as ministers than the new governments of Kevin Rudd, Bob Hawke or Gough Whitlam, with 14 MPs having served in the 30-member executive wing of government during the Rudd and Gillard years.

Our national government now better reflects the make-up of Australian society. The fact that women will make up 38 per cent of the House of Representatives and 57 per cent of the Senate, the highest on record for both chambers, is a positive thing.

This, of course, is no guarantee of success. The Age backed the election of an Albanese government on two main bases: that a change of government could begin restoring integrity to federal politics; and that it would act finally on climate change. But the challenges are immense. Cost of living pressures, childcare, climate change, wages growth, national security and budget repair are all issues that will take sustained and smart work.

It is good that our government is now more representative, but it also needs to be competent, transparent and active. And we, as ever, will be ready to hold them to account.

Gay Alcorn sends a newsletter to subscribers each week. Sign up to receive her Note from the Editor.