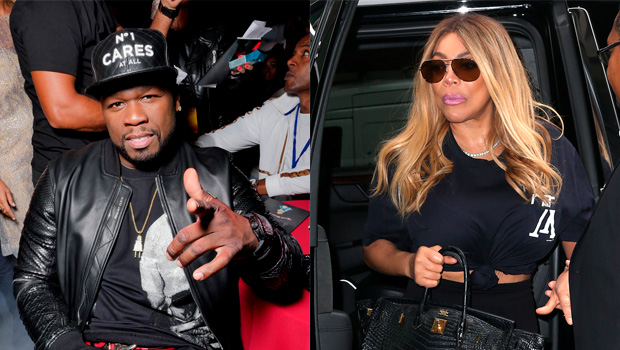 50 Cent’s feud with Wendy Williams heated up on Aug. 18 after she was denied access to his pool party and the rapper has no regrets about blocking the talk show host from his bash!

It doesn’t appear that 50 Cent, 44, and Wendy Williams’, 55, feud will come to an end anytime soon. The “In Da Club” rapper made sure the talk show diva had trouble entering his Tycoon Pool Party in New Jersey on Aug. 18, thanks to a short clip he posted of Wendy talking to a security guard outside the venue at BarCode. And a source close to 50, who is known for trolling his enemies on social media, gave HollywoodLife the EXCLUSIVE scoop on why he didn’t want Wendy there!

“50 wanted nothing to do with Wendy at his party,” the insider explained. “He wanted her to never even make it in and didn’t even expect her to be at the door to attempt to get in. He doesn’t want to be associated with her and that is why he always goes after her on social media. She was never invited and never would be invited, she is the last person he would want to see at his party.” Despite 50’s security efforts, Wendy and her son Kevin Jr., who was celebrating his 19th birthday throughout the weekend, still managed to make their way into the packed pool party. They even stopped to snap a few photos with Snoop Dogg!

As we reported earlier, a source EXCLUSIVELY told HollywoodLife that Wendy thought it was “totally disrespectful” to try and block her and her son from entering. “She could not believe that 50 would really have security block her from entering and to make matters worse, go on social media and brag about it after,” the friend said. “It was a totally disrespectful move and Wendy wants nothing to do with 50 or his childish antics. Wendy knew that 50 would be at the party but she wasn’t aware it was being hosted by him. There were a lot of celebrities in attendance and Wendy just thought the party would be a fun way to continue celebrating Kevin Jr.’s birthday.”