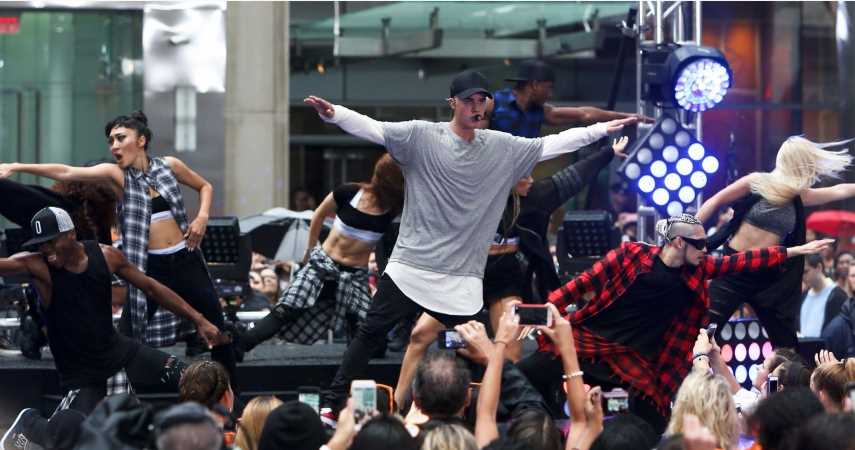 A multi-instrumentalist since childhood, Justin Bieber learned to play the trumpet, piano, and guitar from a young age. During a singing competition, he sang So Sick by Ne-Yo, which was uploaded by his mother on YouTube for friends and relatives to see. After uploading various covers, it caught the eye of Scooter Braun, who later arranged a meeting between him and Usher. He released a two-part album, My World and My World 2.0, which debuted at the top spot, and his single Baby sold over 15 million singles. While the initial albums of Justin Bieber were fun pop tracks, his music became lyrically inclined and mature with Purpose, that only increased his popularity.

Justin Bieber and Danish singer MØ featured on Major Lazer’s head-bopping track Cold Water, released in 2016. According to High Snobiety, the calming syncopated percussion and shredding guitar riffs makes the number popular, along with the singers’ smooth voices. The song peaked at No.2 on Billboard and remained on the charts for 27 weeks.

Justin Bieber and The Kid LAROI collaborated on STAY, an instant hit that blew up on TikTok and Instagram for its heartbreaking lyrics and fast-paced track. Bieber co-wrote the song with Charlie Puth, and the single was successful as it stayed at the No.1 spot for a whopping seven weeks and remained on the charts for 62 weeks.

In a song created during the lockdown, Justin Bieber and Ariana Grande worked together in May 2020. They released Stuck With U. It marked their second collaboration and shot to the No.1 spot as it was a refreshing single during the COVID-19 pandemic. It quickly became double platinum and raised over $3.5 million, which was donated to the First Responders’ Foundation in America.

The perfect summer party song, DJ Khaled brought the biggest stars in music together with artists like Chance the Rapper, Quavo, Lil Wayne, and Justin Bieber to collaborate on I’m The One. Along with staying on the US Charts for 22 weeks, the song peaked at the No.1 spot for one week, as stated by Insider. Its music video has generated over 5.6 billion views to date.

Justin Bieber made a long-awaited comeback in 2015, four years after he last released music. The first single from his Purpose album was What Do You Mean? which surpassed predicted expectations. As mentioned by Billboard, it was Bieber’s first song to debut and reach the No.1 spot and only the 23rd song ever to debut at the top spot. The song was a call-out for his rebranding that the audiences accepted with open arms.

After promoting his lead three singles: What Do You Mean, Where Are You Now, and Sorry from Purpose, Justin Bieber released his last single, Love Yourself. A stripped-down version co-written by Ed Sheeran, it truly shows Bieber’s vocal range in a deceptively sweet song. The song was nominated for a Grammy and remained No.1 on Billboard Hot 100 for two weeks.

The most successful Justin Bieber solo single, Sorry, instantly hit the top spot on Billboard charts and remained in the position for three weeks before staying in the Hot 100 for 42 weeks. Co-produced by Skrillex and co-written by Julia Michaels, Sorry has simple lyrics with sublime meaning, while the video features a group of women dancing in perfect choreography.

Despacito by Luis Fonzi and Daddy Yankee was undoubtedly the biggest song of 2017. The song climbed the top spot on Billboard Hot 100 and reigned its position for 16 weeks, typing the previously held record by One Sweet Day, as noted by Variety. Along with becoming the most-listened song, its original Latin music video has over 7.9 billion views, the most for any song.

His other notable Billboard Hot 100 hits include Ghost, Essence, Let Me Love You, Where Are You Now, and Holy. Bieber took a brief break after Purpose and released his succeeding albums Changes and Justice in 2020 and 2021, respectively. The singer has currently embarked on a Justice World Tour 2022.

READ NEXT: From Ashley Tisdale To Madison Beer: Inside The Luxurious $6 Million Hollywood Hills Home