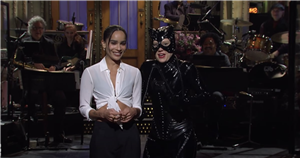 Fresh off the box office success of “The Batman,” Zoë Kravitz, who plays Selina Kyle/Catwoman in the Robert Pattinson-helmed film, made her “Saturday Night Live” debut on March 12. At the start of the 33-year-old actor’s monologue, “SNL” cast member Kate McKinnon, dressed as Catwoman, crashed the set. “To prepare for the role, I watched the movie musical Cats every day for a year, which is actually the same way I heard Joaquin Phoenix prepared to play the Joker,” Kravitz joked before McKinnon approached the Studio 8H stage in a leather dominatrix suit. “You’re also Catwoman?” Kravitz asks McKinnon, who responds, “Yes, I’m Catwoman from the ’90s, the one with the whip. You know, like cats have.”