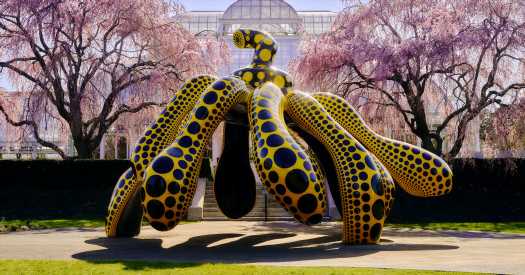 One thing the pandemic has deprived us of — for a little while longer at least — is the heady experience of being lost in a crowd. For some people it’s thrilling, for others unnerving. It’s always a change of perspective.

It’s also the feeling I associate with the work of the 92-year-old pop and conceptual artist Yayoi Kusama, best known for her infinity mirrors, her paintings and sculptures crowded with polka dots — and for the hordes of fans she typically draws. Luckily, starting this weekend you can dive into the vertiginous delights of dots and infinite reflection at “Kusama: Cosmic Nature,” an expansive show of outdoor sculptures, along with special gallery exhibits and installations, set among the flowering cherries of the New York Botanical Garden. With timed entry tickets and 250 acres to wander through, the venue also offers a rare chance to contemplate Kusama with a little elbow room. 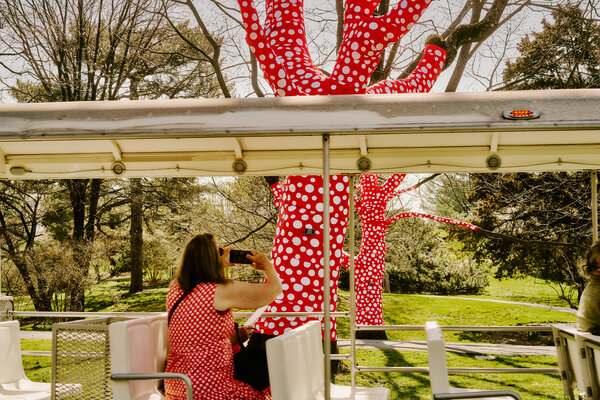 Three years in the making, the show includes several ambitious pieces, along with a couple of ingenious revivals of Kusama standards and a solid little retrospective of early paintings and performances. (There’s a small free-standing Infinity Room, too — a mirrored little shed in the Home Gardening Center — but the garden won’t be opening its interior till the summer.) Not every new work is equally strong: “Dancing Pumpkin,” a deliriously speckled 16-foot yellow octopus, and “I Want to Fly to the Universe,” an aluminum sun with writhing red tentacles, are perfect; “Flower Obsession,” an installation that asks visitors to add stickers to a greenhouse, too gimmicky.

But the overall idea of setting Kusama’s repetitive dots against the teeming profusion of a botanical garden is inspired. Kusama grew up in Matsumoto, Japan, where her grandparents operated a commercial nursery, and plants have figured heavily in her psychic life. She drew them — look for a couple of highly detailed pencil drawings she made as a teenager — and she hallucinated them, being visited by dancing pansies and pumpkins as a child. (She also saw optical patterns, and continued to struggle with her mental health even as she moved to New York, staged protests and “happenings” there and moved back to Japan.)

Pairings of brightly painted oversize steel flowers with live palms, in the Enid A. Haupt Conservatory, or even of patterned polyester wrappers with stately oak trees, offer a surprisingly subtle interplay of forms and colors. Even more striking is the way nature and artifice complement each other psychologically. Kusama’s hard-edge, comparatively cold polka dots bring out the plants’ dark side, their relentless, impersonal compression of growth, sex and decay. At the same time the actual flowers highlight the wistful yearning of Kusama’s whole project, the slightly desperate ecstasy that this famously prolific artist has spent so many decades manufacturing for herself.

Once you know what to look for, you can find it indoors, too, especially in an installation called “Pumpkins Screaming About Love Beyond Infinity.” Yellowish acrylic pumpkins seeded with LED lights fill a five-foot-square glass cube in a darkened room near the garden’s main entrance. First one small pumpkin lights up, like a child’s mind winking into awareness. It’s homey and charming to see the small glow surrounded by larger shapes. But as more pumpkins switch on, the box’s panels become two-way mirrors, endlessly replicating the little scene, till you’re left staring into an inescapable infinity.

“Narcissus Garden,” the show’s quiet showstopper, is a revival of a piece Kusama originated at — or rather, near — the 1966 Venice Biennale. Without an invitation to participate, Kusama stood outside tweaking gawkers and collectors with 1,500 reflective steel spheres the size of bowling balls and a sign that read “Your Narcissism for Sale.” (She got her chance to show officially in 1993, when she was given the Japanese pavilion.) Here in the Bronx, the piece tweaks human pretensions more generally. Floating on the waters of an artificial wetland in the Native Plant Garden, the steel balls move back and forth in schools, pack themselves tightly against the edges with gentle clicking sounds and occasionally set out alone. I watched one drift slowly, like an alien ship, past a quacking duck.

The duck seemed nonplused. I may have been projecting, but maybe that’s the point — it’s hard not to see yourself in a mirror, especially one that seems to move with such purpose. In the end, of course, the ball that caught my eye was no different from any other, and they were all just bobbing along mechanically on the tide. But I can’t think of a better way to spend a spring afternoon than watching them.