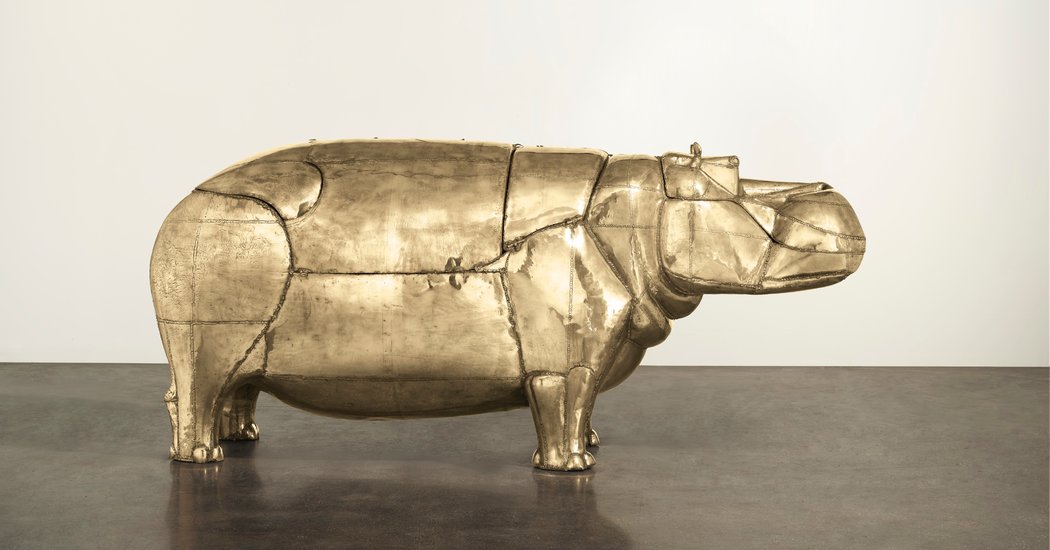 New York’s biannual billion-dollar “gigaweek” of sales, whose latest series starts on Monday, is the glittering pinnacle of the auction market for Impressionist, modern and contemporary art. But is instability in the wider world taking off some of that shine?

The week’s various auctions at Christie’s, Phillips and Sotheby’s (which in June returned to private ownership) are estimated to raise at least $1.2 billion. But the world’s wealthy will have to be in a free-spending mood to match the $2 billion raised in May at the equivalent spring sales, when Jeff Koons’s stainless steel “Rabbit” sculpture fetched $91.1 million, an auction high for any work by a living artist. This time around, there are few museum-quality works by the most famous artists to tempt billionaires — no painting or sculpture is estimated to sell for more than $45 million.

“First, there isn’t a major estate — this cycle doesn’t have a Rockefeller,” said Diana Wierbicki, global head of art law at Withers Bergman LLP, referring to Christie’s 2018 record-setting auction of the Peggy and David Rockefeller collection.  Second, she pointed out, sellers and buyers are confronting the global economic uncertainty from a looming Presidential election in the United States, riots in Hong Kong and a Brexit-traumatized Britain.

And owners who could sell are thinking twice about offering trophy works at auction because President Trump in 2017 removed art from the assets eligible for 1031 exchanges — the strategy that allows investors to defer paying capital gains tax on property when it is sold, as long as a similar property is purchased for the same amount. “Now people are asking, ‘Does it make sense to sell if I’m facing a federal capital gains tax of 28 percent?’” Ms. Wierbicki said.

A report by the French database Artprice that global auction sales were down 17.4 percent in the first half of 2019, as well as the closure in July of Pace gallery’s branch in Beijing, have also sobered the mood.

Yet there could be a silver lining for buyers with a more modest amount to spend on younger artists and representative pieces by established names.

“For most buyers, there’s comfort in a season lacking superlatives,” said Doug Woodham, managing partner at Art Fiduciary Advisors, based in New York. “Inexplicable prices can diminish the confidence of some collectors.”

This week about 2,050 works will come under the hammer at the three auction houses, the biggest such offering in New York since Nov. 2015, according to data supplied by Artnet.

“These are low risk auctions. There won’t be the fireworks we’ve seen in the past,” warned Helly Nahmad, a New York gallerist specializing in high-end Impressionist, modern and contemporary art. But Mr. Nahmad said that dealers offering new works had sold well at the recent Frieze London and FIAC art fairs. “The art market is always one auction away from being on fire,” he added.

Here is a selection of works from the coming week that might ignite bidding.

After decades of intense trading, there are few Impressionist and Modern masterpieces still in private hands. Surrealism is one area where collectors and their advisers feel there is still quality and value to be found. (Wilbur Ross, the commerce secretary, has been an enthusiastic buyer of Magritte). Its conceptual content has also crossover appeal to buyers of contemporary art. “It’s been somewhat overlooked,” said Suzanne Gyorgy, global head of art advisory and finance at Citi Private Bank in New York. “We do a lot of work with clients in Asia, and there is real interest in Surrealism there.”

At Christie’s on Monday night, Rene Magritte’s typically enigmatic 1959 canvas, “Le Sabbat,” showing a still life painting hanging upside down in an evening landscape, is certain to sell for at least $8 million, thanks to a pre-auction guarantee from Christie’s.

Sotheby’s and Christie’s Impressionism and Modern art sales increasingly rely on outstanding pieces by less well known names. On Tuesday night Sotheby’s will be offering the much-exhibited 1884 portrait, “Richard Gallo et son chien Dick, au Petit Gennevilliers,” by Gustave Caillebotte, showing a journalist friend of the artist strolling with his black poodle beside a sunlit river Seine. A fringe member of the Impressionist circle, Caillebotte was a gifted painter in a more Realist manner. Never offered at auction before, this particular work has been on loan to the National Gallery in London and the Metropolitan Museum of Art. It is estimated to sell for at least $18 million and has been guaranteed by Sotheby’s.

Ever keen to give a fresh twist to its “20th Century Week” series, Christie’s will hold a day sale of sculpture and design inspired by animals. “La Ménagerie,” the 31-lot auction, will include this singular welded brass and copper “Hippopotame I” which unfolds to reveal a sink, vanity, and full bathtub. it was made by François-Xavier Lalanne, husband of the fellow French designer, Claude Lalanne.

The quirky creations of “Les Lalanne,” melding art and design, have since the 1960s been collected by such influential tastemakers as Gunter Sachs, Yves Saint Laurent, Peter Marino and Tom Ford. Last month at Sotheby’s in Paris, the Lalannes’ private collection proved a $100 million sellout. Christie’s hippo bath, made in 1969, was acquired by its East Coast owner at auction in 2006 for $169,000. It is now estimated at $1 million to $1.5 million.

For many, the one out-and-out trophy of the season is David Hockney’s rediscovered acrylic on canvas, “Sur la Terrasse,” offered at Christie’s Wednesday night postwar and contemporary auction. The $25 million to $45 million estimate makes it the most highly valued lot of the week. (At the time of writing, it hadn’t been guaranteed.) The luminous, nine foot high composition, suffused with sunlight and a melancholy sense of a fading relationship, depicts Mr. Hockney’s then-lover, Peter Schlesinger, on the balcony of the couple’s room at the Hotel La Mamounia in Marrakesh in 1971. They broke up later that year.

This little-known work has emerged from an unnamed European private collection and was last exhibited in public in 1973. The $90.3 million achieved at Christie’s last November for Mr. Hockney’s 1972 “Portrait of an Artist (Pool with Two Figures)” — which also featured Mr. Schlesinger — has encouraged owners to part with major works by Britain’s most expensive living artist at auction.

“I knew of its existence, but this is the first time I’ve seen it,” said Offer Waterman, a London-based dealer in modern and contemporary art, who in 2015 sold “Peter on the Balcony,” a crayon-on-paper study for the latest Hockney trophy. “Obviously it’s a very ambitious painting,” added Mr. Waterman. ‘‘There’s no question it’s a great work.”

Earlier on Wednesday, Phillips will hold its day sale of contemporary art, which tends to be the week’s clearest indicator of which younger artists are most in demand. It will include a five-foot-high panel painting from 2014 by the Harlem-based artist Derek Fordjour. A nocturne showing two male figures standing at the edge of a circus ring, the painting had been acquired directly from the artist and is estimated to sell for between $50,000 to $70,000. That valuation reflects the $40,000 to $90,000 asked for Mr. Fordjour’s latest paintings at a sell-out show at the Josh Lilley gallery in London during Frieze Week.

Many buyers are looking to auctions to acquire Mr. Fordjour’s works, and resale “secondary” market prices are rising steeply. Last month, a 2017 painting sold at Phillips in London for $169,000. “The auctions reflect where the speculation is,” said Candace Worth, an art adviser based in New York. “There is a clutch of younger artists that have become flash points,” added Ms. Worth, who singled out Mr. Fordjour, Julie Curtiss, Tschabalala Self and Loie Hollowell.

Sotheby’s 51-lot evening sale of contemporary art contains impressive large-scale abstracts by Mark Rothko and Willem de Kooning that are each estimated to raise at least $25 million. The auction also includes a full-length Francis Bacon “Pope” painting from about 1958, sold by the Brooklyn Museum in order to “support museum collections.” The work had been donated to the museum in 1981 by the American businesswoman and collector, Olga H. Knoepke. It is certain to sell for at least $6 million, courtesy of a guarantee from Sotheby’s.

According to the catalog, the painting was made in Tangier during his violent love affair with the ex-fighter pilot, Peter Lacy. Most of the paintings from that chaotic period were destroyed, but this was one of six given by the artist to his friend Nicolas Brusilowski, on the understanding that the canvas would be reused.

“Brusilowski did not paint over them, but instead preserved them,” Sotheby’s catalog entry said, adding that this Brooklyn Museum gift is included in the artist’s catalogue raisonné.

However, Sotheby’s did not mention that Martin Harrison, in his complete catalog of Bacon’s works, quotes from a letter the artist wrote in 1982 to the Brooklyn Museum. “It was a throw-out and it depresses me he did not destroy the image as he undertook and that it has years later found its way onto the art market and I would prefer if it were not exhibited,” wrote Bacon.

Sotheby’s relatively modest seven-figure estimate seems to confirm the artist’s assessment. At their best, Bacon’s Velasquez-inspired “Pope” paintings are among his most celebrated works. In 2007, another full-length example sold at Sotheby’s for $52.7 million.

Back in July, as ongoing protests continued to disrupt Hong Kong, Sotheby’s managed to produce a remarkable auction result. “Knife Behind Back,” an unusually large, characteristically stylized painting of a menacing-looking young girl in a red dress by the Japanese artist Yoshitomo Nara sold for $25 million. The acrylic on canvas, from 2000, sold for more than five times the artist’s previous auction high.

“It was an extreme symptom of the buildup of interest in his art over the last year,” said Robert Manley, deputy chairman and worldwide co-head of 20th Century & Contemporary Art at Phillips. “He’s always been quite popular and you just can’t get them,” added Mr. Manley, who pointed out that the six highest auction prices for paintings by the cartoon-influenced Mr. Nara have all been achieved this year.

On Thursday, Phillips’s evening contemporary sale will include a painting by Mr. Nara from the same date, titled “Little Thinker,” showing the same girl with dark bobbed hair, wearing the same white-collared dress.

The Phillips painting is less than half the size of the Hong Kong record-breaker, but with demand for Nara riding high, the $3 million low estimate could quite quickly attract incendiary bidding.