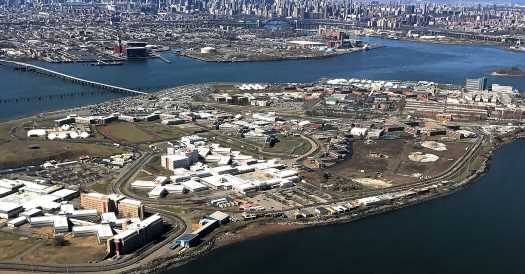 During the past few months, Rikers Island has been the site of sequential atrocities so stark that this week four members of New York’s congressional delegation called for its immediate closure. Among the most recent was the death, a few weeks ago, of 24-year old Esias “Izzy” Johnson, who had spent the previous month trying and failing to be released on bail and his final hours, his family claims, screaming for medical help in vain.

Just two weeks ago, Assemblywoman Jessica González-Rojas, touring the jail with other elected officials, witnessed a man try to hang himself with a bedsheet. On Sunday, Isaabdul Karim became the 11th person to die in custody at Rikers this year.

Mr. Karim died in the midst of a medical emergency after what his lawyers have said were weeks without the proper care. He had arrived at the jail 31 days earlier on a minor parole violation. But only 48 hours before he died, Gov. Kathy Hochul signed a law directed at ending the practice of detaining people for precisely these sorts of transgressions — ones that include missing curfews or appointments with parole officers, or failing drug or alcohol tests. New York State was incarcerating people for these violations at a rate nearly three times the national average, and advocates for criminal justice reform had been pushing for the change for a long time as one means of dealing with the crises that have been escalating at Rikers. Mr. Karim would have been eligible for release only a few days after he died.

Situated in one of the most forward-thinking cities on earth, Rikers — gradually and then seemingly all at once — has joined the ranks of the worst jails in the world, its early history having suggested a far more promising outcome. The 400-acre island, which had been serving as a garbage dump, opened as a jail site in the early 1930s, to replace the century-old penitentiary located farther south in the East River, on another island, Blackwell’s, where barbarism was endemic and which a visiting Charles Dickens once identified as “a listless madhouse.”

Writing in The Times in 1935, the art critic Edward Alden Jewell described a companion set of murals planned for a long corridor at Rikers, one of them depicting the prisoner’s life as it had been, “forced to undergo every manner of degradation,’' and the other dramatizing the crusading values of the New Deal.

“On this wall, we see the prisoner treated as a human being; more and more, even as an individual,’' he wrote, locating the images in “direct and telling opposition to the vicious system of the old.”

But it was the vicious system of the old that would ultimately prevail. Overcrowding was already a problem in the 1950s and ’60s. By the early 1970s, lawsuits alleging inhumane conditions were piling up. It was not until the 2015 suicide of Kalief Browder, who had been accused (but never convicted) of stealing a backpack as a teenager and was forced into solitary confinement, that calls for the jail to close became part of the mainstream conversation. Mayor Bill de Blasio did not initially join the chorus of those determined to produce this result. Early in 2016, as he promoted his $2.5 billion plan for a streetcar that would run along the Brooklyn-Queens waterfront, and seemingly oblivious to the dissonance, he called the idea of shutting Rikers a “noble concept” doomed by its expense.

The mayor revised his stance only after a report from an independent commission led by Jonathan Lippman, former chief judge of New York State’s highest court, recommending a path to eliminating the complex by creating smaller community jails near courthouses around the city and drastically reducing the jail population. The recommendations had a lot of support during an election year for Mr. de Blasio, even as some reformists found them distressingly pragmatic.

Four years after the Lippman Commission’s report was released, little progress has been made on the construction of those smaller jails, meant to accommodate light and air and move past the architectural brutalities that have characterized Rikers. Anticipating the complexities of constructing anything in New York City, the report called for Rikers to be completed within a decade. Plans to rebuild a detention center in Brooklyn — where one of the biggest real-estate booms in the country has evolved in spite of it — met predictable resistance. So too did the plan for a jail in the South Bronx.

The delaying opposition appeared on two fronts, one led by NIMBY-ists and the other by advocates on the left who have sought to abolish jails altogether. Beyond that, until the federal stimulus was passed, the city was operating on a $9 billion deficit. Now that those challenges have been overcome, contracts for the new buildings should be registered by the end of this year, city officials say.

I recently spoke with Judge Lippman about the prospects for quick completion at this moment of political transition. Mr. Lippman has spoken to Eric Adams, New York’s presumptive next mayor, about Rikers, many times. “He is totally committed to closing it,’’ Mr. Lippman told me. “We have to get shovels in the ground and do whatever it takes to cut the red tape,’’ he added. “But It’s very hard to concentrate on building when you have a parallel track, a place in crisis every day.”

That crisis is partly a function of a jail population that was driven up again as the pandemic slowed the function of the courts and a work slowdown among correction officers at Rikers that prompted the city to file a lawsuit against the union recently. The lawsuit was dropped after the union agreed to discipline officers who pretended to be sick to avoid work.

“This is the moment,” Mr. Lippman said. “This is it. What has happened the last few months at Riker’s only highlights that you have to proceed with lightning speed. It’s not simple. But it’s not nuclear science, either.”