An adaptation of a beloved video-game series debuts on HBO. And the Golden Globe Awards air on NBC. 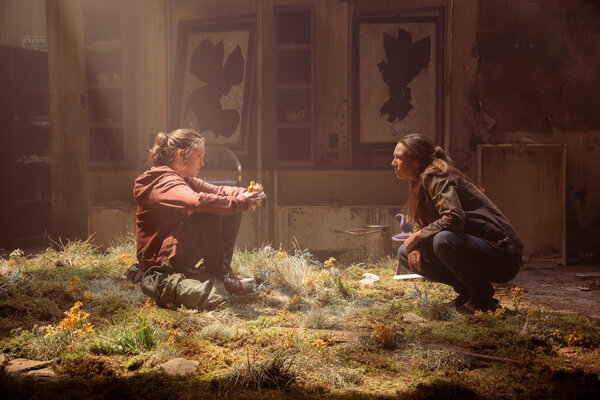 Between network, cable and streaming, the modern television landscape is a vast one. Here are some of the shows, specials and movies coming to TV this week, Jan. 9-15. Details and times are subject to change.

A QUIET PLACE (2018) and US (2019) 5 p.m. and 6:50 p.m. on FXM. Why do families make for such rich horror fodder? Because they have complex internal dynamics? Or because family vacations can be naturally hellish? Whatever the reasons, these two modern horror blockbusters make for a nice do-it-yourself double feature. First, at 5 p.m., “A Quiet Place,” from John Krasinski, which centers on a mother (Emily Blunt) and father (Krasinski) raising their children (Millicent Simmonds and Noah Jupe) in a post-apocalyptic world where sightless aliens hunt for humans by ear. Then, at 6:50 p.m., is Jordan Peele’s “Us,” about a mother and father (Lupita Nyong’o and Winston Duke) and their two children (Shahadi Wright Joseph and Evan Alex) who are stalked by their psychotic doppelgängers while on a seaside vacation.

80TH GOLDEN GLOBE AWARDS 8 p.m. on NBC. The Golden Globes return Tuesday night after an ethics, finance and diversity scandal involving the Hollywood Foreign Press Association, the group behind the awards, led to the cancellation of the 2022 telecast — and an ongoing debate about whether the Globes should exist at all. It’s unclear whether Tuesday’s ceremony, hosted by the comic and filmmaker Jerrod Carmichael, will be anything like the movie-awards-season bellwether the Globes have traditionally been. But the top categories include many films and shows of note: Nominees in the best picture, drama, category are “Avatar: The Way of Water,” “Elvis,” “The Fabelmans,” “Tár” and “Top Gun: Maverick.” Best picture, musical or comedy, nominees are “Babylon,” “The Banshees of Inisherin,” “Everything Everywhere All at Once,” “Glass Onion: A Knives Out Mystery” and “Triangle of Sadness.” And TV shows up for multiple awards include “Abbott Elementary,” “House of the Dragon,” “Better Call Saul” and “The Crown.”

THE MENU (2022) 9 p.m. on HBO Signature. Snootiness smells like caviar in this dark satire of fancy dining from the director Mark Mylod ( “Succession”). The story centers on a young couple, Margot (Anya Taylor-Joy) and Tyler (Nicholas Hoult), dining at a luxe island restaurant run by a famous chef (Ralph Fiennes). As courses are served, the night grows ever more chaotic — and, eventually, violent. The movie is far from subtle, taking on its satire “more often with cleaver than paring knife,” Jeannette Catsoulis wrote in her review for The New York Times. “Yet everyone is having such a good time, it’s impossible not to join them,” she added. “The movie’s eye might be on haute cuisine, but its heart is pure fish and chips.”

WILLIE NELSON: LIVE AT BUDOKAN 8:30 p.m. on PBS (check local listings). This 1984 concert from Willie Nelson was filmed in Japan, but, watching it, you’d be forgiven for thinking otherwise: The stage is backed by an enormous Texas flag. See Nelson perform some of his biggest songs, including “Whiskey River” and “On the Road Again,” during an era that was arguably his peak.

DAYS OF THUNDER (1990) 8 p.m. on AMC. Four years after “Top Gun,” the director Tony Scott released another Tom-Cruise-in-a-dangerous-vehicle movie with this drama about the escapades of a NASCAR newcomer (Cruise). You won’t hear Kenny Loggins sing “Danger Zone” here, for better or worse, though you will experience a relatively early score from Hans Zimmer.

WHITE HEAT (1949) 4:15 p.m. on TCM. James Cagney, Virginia Mayo and Edmond O’Brien star in this classic film noir about a gangster (Cagney) who unknowingly brings an F.B.I. agent into his crew. When the movie debuted in 1949, the critic Bosley Crowther pointed to its “thermal intensity” in his review for The Times. “There is no blinking the obvious,” he wrote, “the Warners have pulled all the stops in making this picture the acme of the gangster-prison film.”

YOUR HONOR 9 p.m. on Showtime. Bryan Cranston returns as a former New Orleans judge on a downward spiral in the second season of this drama, adapted from the Israeli TV series “Kvodo.” Its grim story follows Cranston’s character, Michael Desiato, in the aftermath of his son’s involvement in a hit-and-run collision that killed the son of a prominent crime-family kingpin. The new season picks up where the first left off, in the wake of a grisly accident.

THE LAST OF US 9 p.m. on HBO. “The Last of Us,” a post-apocalyptic PlayStation series, became one of the most highly regarded video games of the past decade through cinematic gameplay and strong writing. Whether that makes adapting it for TV easier (the games have a first-rate story) or harder (they already play like movies, why bother?) is an open question. Sunday’s debut episode introduces the flesh-and-blood versions of Joel (Pedro Pascal), a seasoned survivor, and Ellie (Bella Ramsey), a teenager whom Joel is hired to smuggle out of a dangerous quarantine zone. The show is a creation of Neil Druckmann, who was behind the original game series, and the screenwriter Craig Mazin, who created the 2019 HBO mini-series “Chernobyl.”