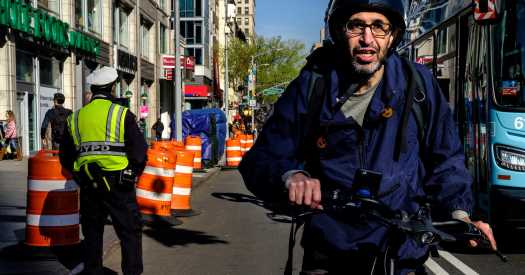 “DoorDash, here you go,” I said to a woman in a bathrobe who opened the door of a building in Brooklyn. I handed her a bag and pedaled off into the drizzle. I could now officially call myself a rider for the food-delivery apps that have transformed the very act of eating in New York and elsewhere.

This was for my first article, published on Sunday, on my new beat at The Times’s Metro section, writing about jobs that define our time through the eyes of the people who do them — and doing the jobs myself when possible.

I chose riders for the food apps (like DoorDash and Seamless and Uber Eats) for my first subject because they’re omnipresent but largely ignored, because they’re on the front lines of the gig economy and because, as one researcher told me, they may be “the most vulnerable workers in digital labor.” And because as a practical matter, anyone can do the job, with minimal or no training, as long as an app is accepting new riders. 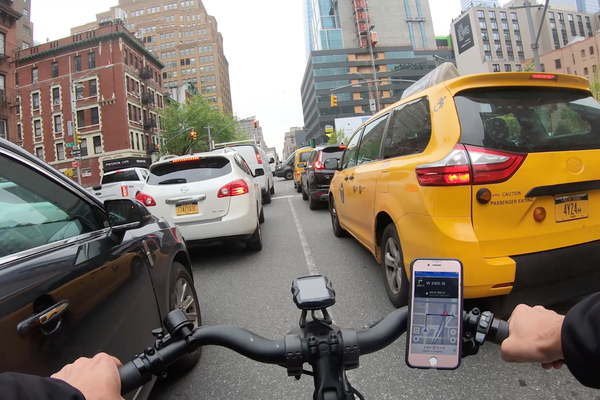 I figured delivery would be a grind. I did not know it would be mentally demanding, at least the way many riders do it, working for multiple apps simultaneously and making split-second decisions about whether to accept this order or that one in the middle of the city’s crazy traffic.

Over the course of six days delivering mostly lunches in Manhattan and Brooklyn, I developed a specialty in rookie errors. I had orders taken away and assigned to other couriers because I had greedily accepted more work than I could deliver on time. I got lost in the maze of the financial district despite the directions on my phone. I accepted orders without bothering to check where they were going and found myself biking across Brooklyn to Kings County Hospital.

The job was hard in other ways, too. In college, many decades ago, I delivered pizza on campus. That was a fun job. My customer-classmates greeted me warmly, often tipped generously and offered the occasional slice or beer or bong hit (not that I ever accepted).

Delivering in the city, I learned that some people apparently consider the person who risked life and limb to bring them their cheese rose oolong tea unworthy of even hello. A lot of my deliveries were to fancy new glass towers that looked like the buildings in video games. The twentysomethings inside would barely crack the apartment door enough to take the bag of food, or maybe just mouth “thanks” without interrupting their phone call. For almost two-thirds of my 43 deliveries, I got no tip.

A friend of mine who has been delivering for three years, Wilder Selzer, called the job “a great window into our stratification.” Quite a few times, he said, he has delivered to people — men and women alike — who answered the door in their underwear, but not in a sexy way.

“It goes back to the class thing,” he said. “You’re like a eunuch — it’s O.K. to be naked in front of you because you’re not a person person.”

The cloak of invisibility descended in restaurants, too. I picked up an order of Rasta Pasta at a bar and grill in Bedford-Stuyvesant from a woman who kept her head turned 90 degrees away as she handed me the food, as if it, or I, were a rotten fish.

The class thing, Wilder said, could have a paradoxical effect on tips. People in public housing tipped consistently, he said, while students at N.Y.U., one of the nation’s priciest colleges, rarely did.

In my travels, the only person who gave me the time of day was a young woman in a housing project in Dumbo, Brooklyn, who had ordered a bottle of wine from a liquor store. It was my first alcohol delivery, and we were both surprised to learn that I had to scan her proof of age into my phone. It took me multiple tries and several endless fumbling minutes. “We’re learning together,” she said. “Now I know, too.”

The next time you order takeout, do me a favor: Look your delivery worker in the eye. Wear clothes.

And don’t forget to tip — cash, please, since one app effectively pockets tips made via the app — and generously. If you’d give 20 percent to the server who walked across the restaurant to bring you dinner, why not the courier who rode halfway across town?

Follow the @ReaderCenter on Twitter for more coverage highlighting your perspectives and experiences and for insight into how we work.

Andy Newman has covered New York City and vicinity for The Times since 1997. He was the founding reporter of the Pet City and New York Today columns and ran The Times’s City Room blog. @andylocal