Madonna, we’ve missed you here on the West Coast! After years of living in cities like New York City and Lisbon, Portugal, the pop star is rediscovering that the Left Coast is the best coast. (Don’t argue with us!) She made a big purchase that not only guarantees some epic Material Girl sightings at hot restaurants like Craig’s and Nobu Malibu, but it gives Los Angeles some Madonna attitude that’s been missing since she left. 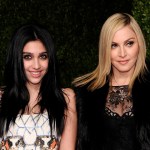 She’s not living in the heart of LA, though — more like the suburbs of the city. But we know she’s here doing business, like work on her biopic with director Diablo Cody, so there’s no time for messing around. The home she purchased, of course, has a celebrity pedigree: recent Super Bowl halftime performer, The Weeknd. He’s owned the home for four years and is now handing it over to Madonna for $19.7 million after originally buying it for $18.2 million.

Listed by Angel Salvador at The Agency, the home with a rock star history is guaranteed to be quirky and that’s exactly what the nine-bedroom, nine full, and two half bathrooms deliver. Madonna and her six kids, daughters Lourdes Leon, 24, Mercy James, 15, Stelle Ciccone, 8, and Estere Ciccone, 8, and sons Rocco Ritchie, 20, and David Banda, 15, can spread out over the 12,500 square feet while basking in the relatively conservative designed home with a few fun quirks.

We’ve got the highlights from Madonna’s new estate — wait until you see the disco-ready garage — and be sure to check out more photos on Dirt.