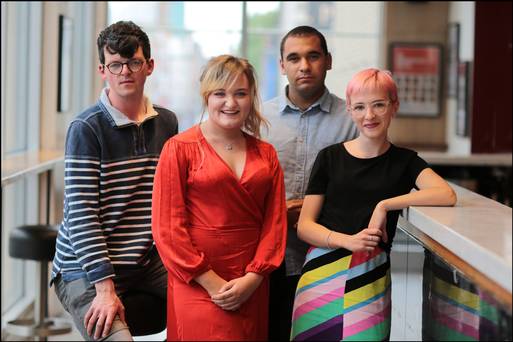 George Bernard Shaw may have said youth is wasted on the young, but he was not young at the time. The Abbey in Dublin set out to let younger voices speak for themselves last year when it sent its first ever call for 18-25 year olds to programme a two-week festival. Over 120 people applied and four were picked.

They are now taking over the Peacock stage until August 10 with The Young Curators Festival, bringing together music, visual art, sound art, dance and workshops, and new shows from Anna Sheils-McNamee, Ciara Elizabeth Smyth, Choy-Ping Clarke-Ng, James Elliott and more.

On a hot afternoon this week, we sat by a fan in the Abbey bar with Allie Whelan [AW] from Co Kildare, Martha Knight [MK] from Tallaght, Co Dublin, CN Smith [CS] from Co Louth and Luke Casserly [LC] from Co Longford.

In May 2018, when you heard you had won this gig, what was your first thought?

MK: Because it’s a pilot programme, we didn’t really know what we were getting ourselves into.

AW: Yes, so much responsibility to be handed two weeks of the Peacock.

LC: It’s very exciting to be the first person to do something. You can make it your own.

CS: What helped me was constantly ­remembering that we were trying to give ­people a platform and that we weren’t just trying to put something together that said something in particular about us. We really wanted to take an artist and their work, and put it on this pedestal.

How much did you have to manage your expectations as to what kind of festival you could create?

MK: Constantly. At the very beginning we talked about a show that starts on a ­Monday and ends on the Saturday! We were so ­ambitious with our first draft, we then had to look at what was possible.

Between you all, you saw upwards of 100 shows this year in preparation. Can you sum up in a word Irish theatre right now?

AW: Multidisciplinary – it’s nearly not enough to just be doing one thing anymore.

CS: Underfunded. If you’re a young artist, it’s much harder to take a risk when you have financial targets to meet and a very small amount of money to give over to experimental projects. You want to go for safe bets that will bring in the crowds and the money.

AW: Yes, when people are being priced out of Dublin, having to return to wherever, they get cut off. There’s work being lost, potential being lost. It’s especially difficult for people in that weird age bracket, who have finished college, and what happens then?

CS, you mention experimental work, a term some find problematic because it suggests work that’s not developed.

CS: I think we need to change the way we watch and think about experimental work. We need to be open to it failing, and open to learning from it. Every piece of art fails and succeeds in different ways. Experimental work just makes a concerted effort to tread new ground and change the landscape. Scientists’ experiments fail every day, and it’s no big deal. The same opportunity should be afforded to artists.

Why did you want to get into theatre and not film, radio, TV production, gaming or sport?

LS: Theatre is one of the last analogue forms that we have. Which involves a gathering of people. It’s a social art form, and the ­possibilities are infinite. Digital technology is transforming. I find it the most exciting art form.

MK: And now as a practitioner you can have lots of different identities, that is really exciting for someone like me who will want to change what I do regularly, who will always want to be stimulated creatively and artistically.

AW: It’s a direct form of communication, face to face, human to human. I think that theatre being inherently affective and live can get a message through to people in an active, encouraging and inspiring way.

Tell us honestly, what’s it really like being young in 2019?

CS: For me it’s equal parts exciting and terrifying. I very much recognise that I’m at the beginning and there’s a whole life ahead of me. But I also feel the conditions are somewhat hostile. Climate change, the rental crisis, these matters are quite scary. If the only viable option for living in Dublin is working in the corporate world, what kind of life is that?

MK: I feel like we’re a group of people who have been taught for our whole lives to interrogate the world around us. We’re­ ­interrogating narratives that have historically been held, we’re interrogating gender and we’re interrogating race, and it’s amazing but then, there’s massive uncertainty around ­people’s living situations, and the environment. I grew up in Dublin, and I don’t know, am I going to be able to live in Dublin for the rest of my life, though I’d really like to? We can make all this amazing interdisciplinary work and we can break down ­boundaries and hierarchies, but we still can’t pay the rent. We don’t have the space to do ­whatever we want because there is a rental crisis.

What are the most untrue things that you hear older people saying about young people?

AW: “They think they know it all”.

MK: That our opinions and ideologies aren’t realistic, or developed enough, and that what we have to say doesn’t count because of a lack of life experience. I think this is a reason there has historically been a lack of young people making decisions at an organisational or policy-making level, and I’m really glad that’s changing now.

We’re sitting under a lot of portraits of founding fathers, do you feel inspired or oppressed by these Abbey presences?

CS: Inspired, personally. I feel like these people set a ball rolling and I’m doing my part in pushing it along.

Who are the theatre makers that really rouse and inspire you?

AW: The thing about DIY is that it makes you think, if they’re making music on a laptop keyboard, that maybe I can make some form of art in my bedroom. It’s kind of nice to think you don’t need access to lots of money or space, but that if you do have an hour one evening, you can make something that’s valued.

CS: Theatre, it’s something you can do anywhere. We do get caught up in the idea of these big houses, big tech and massive production values, but you can just make it in a room.

You are all now officially ones to watch. Where do you all see yourselves in 10 years?

MK: I want to be the artistic director of the Civic Theatre in Tallaght. It’s my community, it’s my gaff.

AW: I haven’t a clue. I know I’d like to leave Ireland and then come back.

LC: I guess I would like to have set up a company, established myself. To travel. It’s a lifelong ambition to find my voice and to make sense of myself and the world around me.

CS: I’d like to be comfortable making work, comfortable knowing that the work I see is really diverse and representative of the people I see around me. I’d like to know that we as Irish people, as human beings are headed in a good direction. To feel optimism and hope.

See abbeytheatre.ie/young-curators-­festival-line-up/ for the full programme which runs until August 10