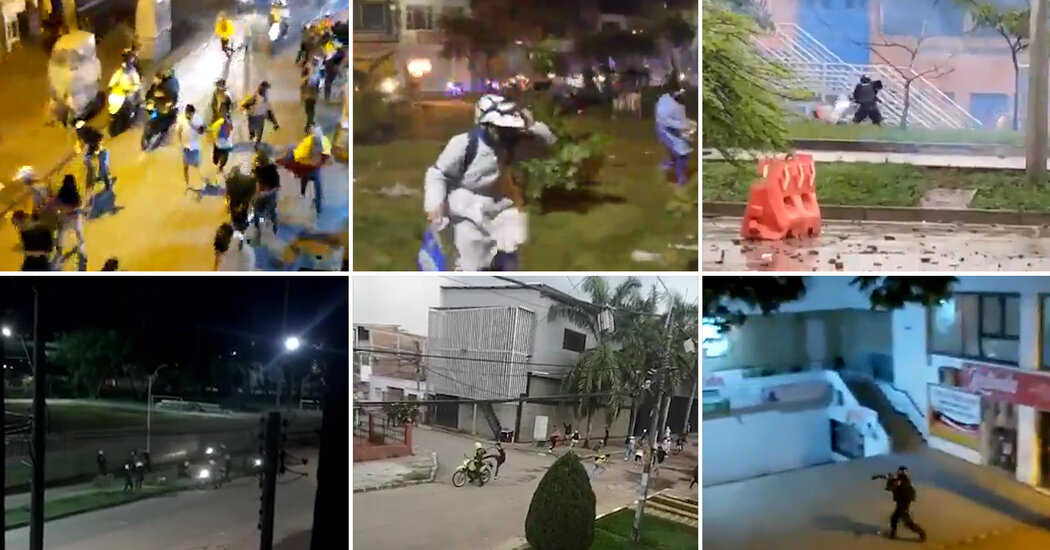 CALI, Colombia — As anti-government protests have gripped Colombia, an analysis of videos from multiple encounters between demonstrators and the police shows how officers used indiscriminate and, in some cases, lethal force against civilians.

The incidents of police violence range from clubbing protesters who were already in custody to fatally shooting a 17-year-old student in the head as he ran away.

At least 44 people have died since nationwide protests began on April 28 over economic disparity issues, according to the Defensoría del Pueblo, a government organization charged with tracking human rights violations. The death toll includes two police officers who have died in the demonstrations.

The Times met and interviewed witnesses and victims in Cali, combed through hundreds of videos circulating on social media and submitted to our tip line. The visual evidence reveals a pattern of disproportionate use of force by Colombia’s national police, including its controversial riot-response unit.

In several videos, police officers can be seen beating and kicking people who are in custody and pose no apparent threat.

On May 1, three days into the protest, the police broke up a gathering in the western city of Pereira. A video captures demonstrators running away. Two of them attempt to hide, but officers quickly find them. The officer also appears to mock the protesters by pumping his fists in the air and chanting a common protest slogan. That officer then kicks one protester into a glass display case that breaks. 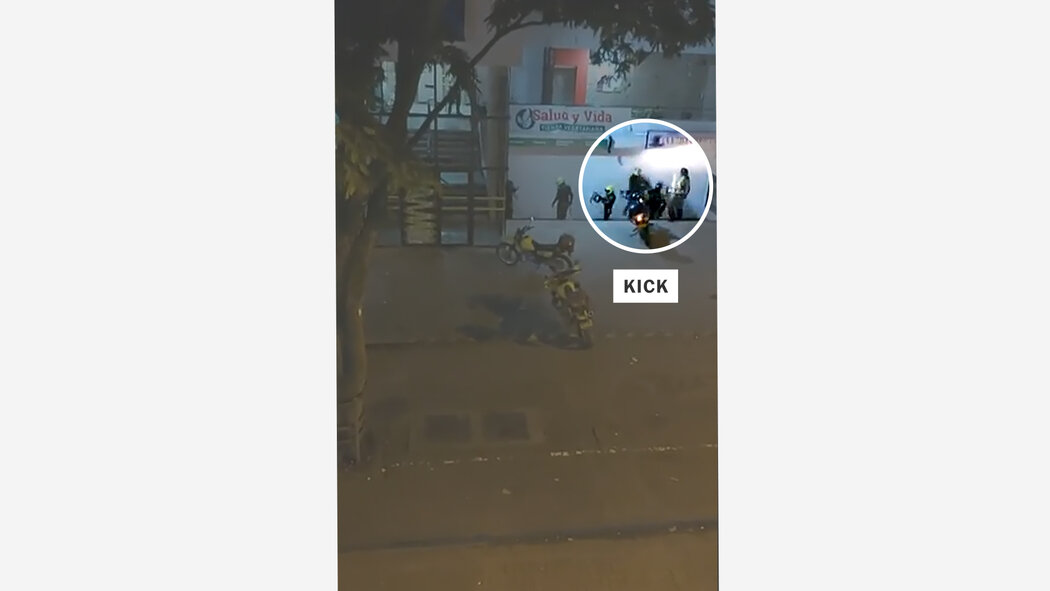 Reckless use of live fire

On May 3 in Cali, the country’s third-largest city, a video shows five protesters being rounded up by officers who appear to be carrying and pointing firearms. In the video, the officers can be seen pushing the protesters to the ground and kicking them as multiple gunshots ring out. One victim The Times spoke to, who asked to remain anonymous for safety reasons, said the police fired live rounds at their feet. This is consistent with what’s seen in the video. 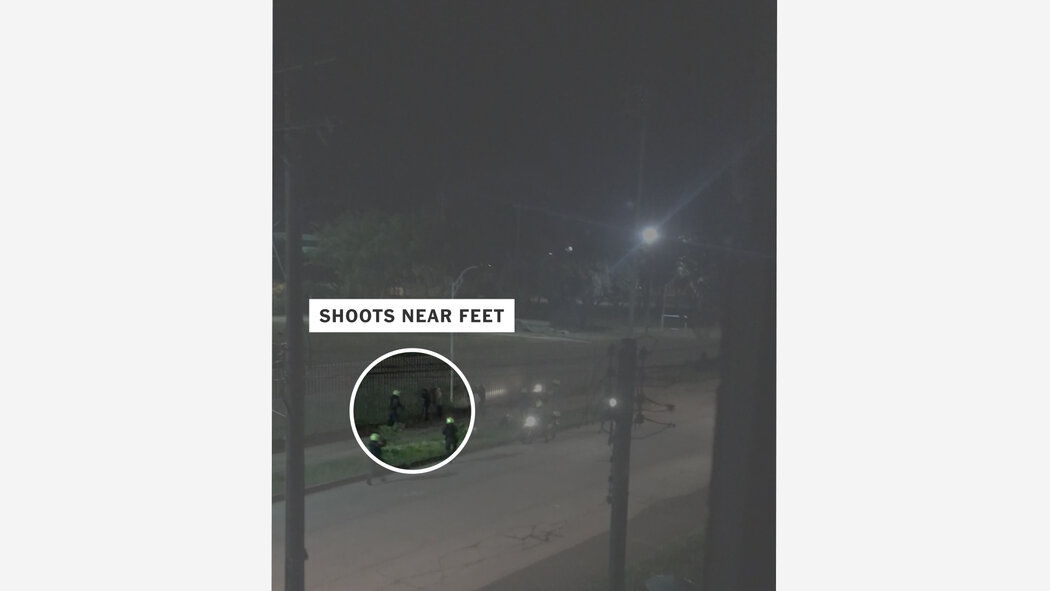 The victim said no one was killed at the scene, but that the detainees were then loaded into a van and taken into temporary detention. He said the police clubbed him over the head, and threatened to burn his body and dump it in a nearby river. He was released hours later with a broken finger and deep lesions to his head.

“I thought they were going to kill me,” he said.

In one incident, on April 30, the police were trying to clear protesters blocking one of the city’s main highways in Cali. A video captures the moment one officer runs up to a protester holding a shield. The officer kicks the person, and then fires what appears to be a tear gas canister or some other form of “less-lethal” munition, directly at them from close range. Fired at this distance, any less-lethal munition can do serious harm or can kill. Another protester was reportedly killed when hit by a tear gas canister just meters away on the same day. 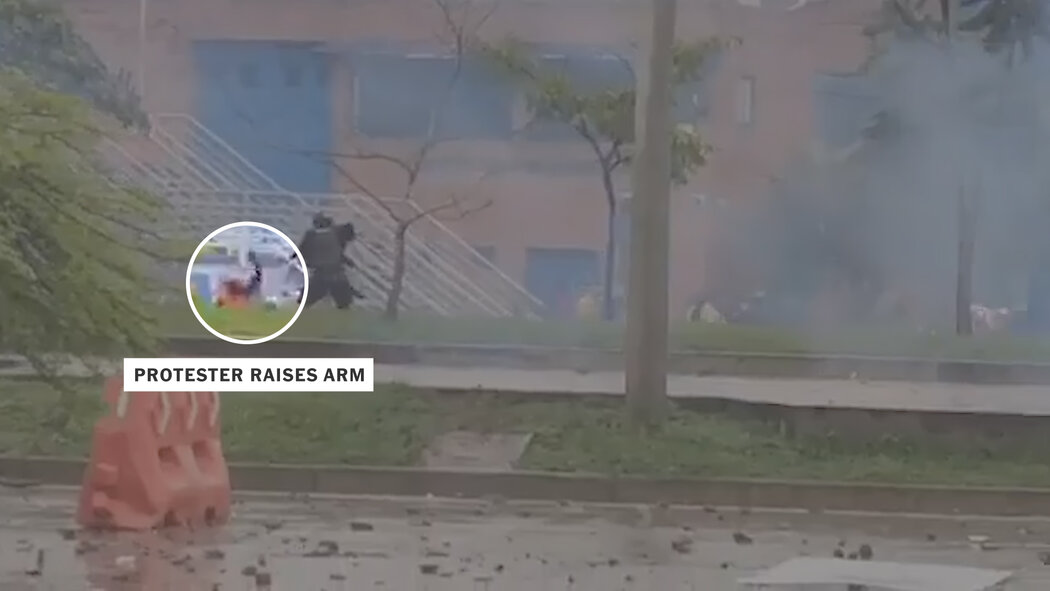 The officer in an all-black uniform is part of an “anti-disturbance” squad deployed to quell protests called the Escuadrón Móvil Antidisturbios — also known by the acronym ESMAD.

These forces only carry less-lethal weapons, such as tear gas canisters and rubber bullets, but they have been flagged for excessive force in previous protests. In 2020, Colombia’s Supreme Court banned the unit’s use of shotguns, and said it posed a “serious threat” for its “impulsive behavior” and ignoring its own guidelines.

In another instance on May 18 in Bogotá, ESMAD officers are seen firing tear gas at volunteer medics helping an injured protester. The incident took place at a well known protest site where medics are clearly identified by their white clothes and helmets. After firing a water hose at a group of medics attempting to give aid, an ESMAD officer fires a less-lethal weapon that appears to hit one of the medics as they run away. 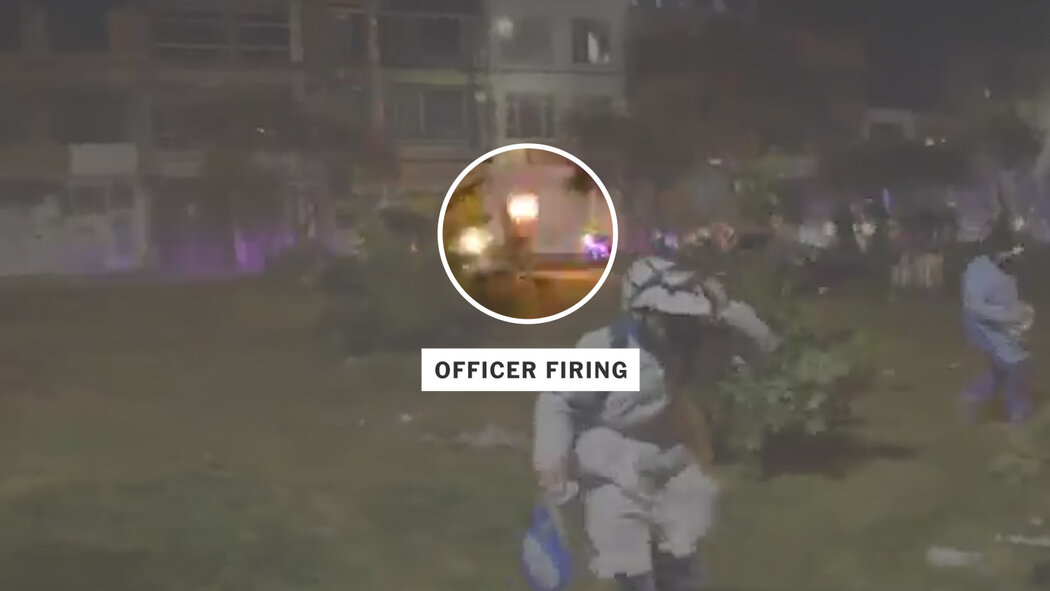 Shot and killed on the street

Among the dozens of people who have reportedly died since late April, the government said at least 17 protesters have been killed in direct connection to the protests and the police response.

With few of these cases caught on camera, it is difficult to establish the exact role officers play in these deaths. But in the April 28 case of Marcelo Agredo Inchima, a 17-year-old high-school student, it is more clear-cut: A police officer shot him in the head as he was running away.

The Times synced two videos, first verified by Cuestión Pública, which show how the incident unfolded. Mr. Agredo Inchima is seen kicking a police officer mounted on a motorcycle. As he runs away, and no longer poses a threat, the officer fires at least three times; one of those shot hits Mr. Agredo Inchima, who collapses on the ground. Other officers also appear to raise their weapons and fire in the direction of the protester.

According to the autopsy report, conducted by Colombia’s National Institute of Legal Medicine and Forensic Science, the fatal bullet struck the teenager in the back of his head. Authorities charged the officer who Mr. Agredo Inchima kicked with aggravated homicide. 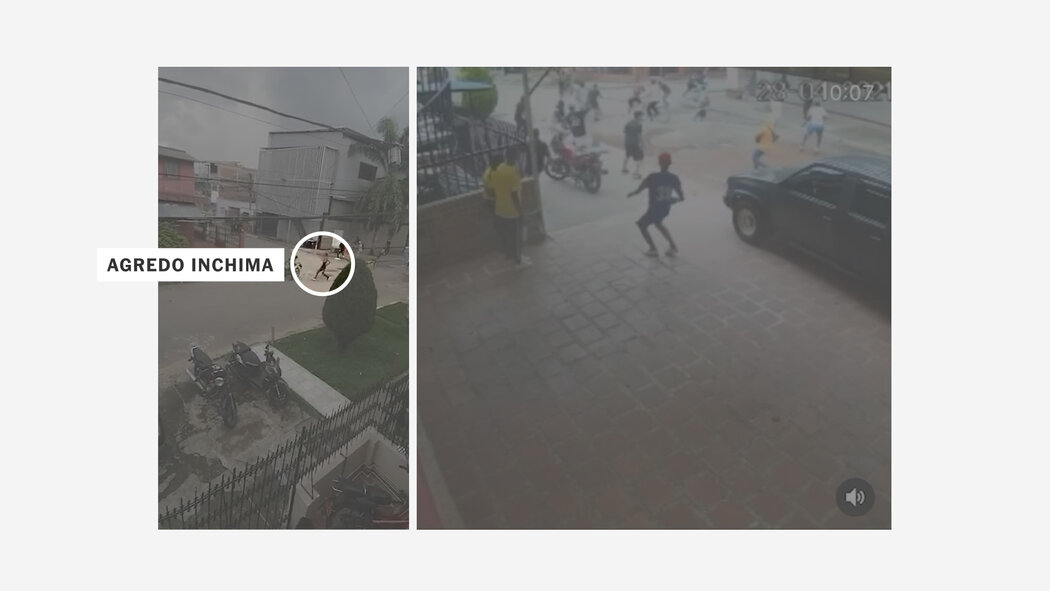 The Colombian police have opened 157 investigations of alleged misconduct by their own officers, including 11 for homicide, but have also tried to push back against complaints against them by saying they are being attacked by “fake news,” highlighting that two officers have been killed and another 35 have been shot by firearms during the protests.