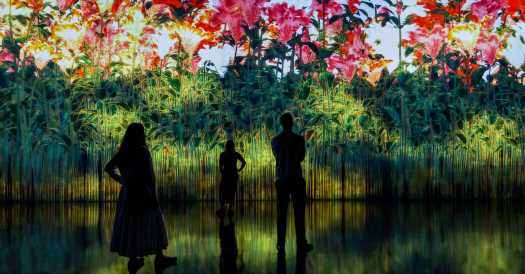 Feeling a little like Alice in Wonderland as gigantic digital images of red, white and cream-colored dahlias budded, bloomed and shattered on the wall in front of me, I dithered over what I was witnessing. Is this a forward step in the march of modernism or a debasement of art into theme-park entertainment?

The dazzling floral extravaganza by teamLab, a digital art collective based in Tokyo, is the dynamic centerpiece of an inaugural exhibition at Superblue, a Miami “experiential art center” (or an E.A.C. to initiates) that begins invitational previews next week before opening to the public on April 22. Backed by the juggernaut Pace Gallery and Laurene Powell Jobs’s Emerson Collective, Superblue is the blue-chip contestant in the rapidly growing field of immersive art.

The popularity of this genre is driven by contradictory desires, as demonstrated memorably by the line of visitors in 2019 who waited up to six hours for a one-minute stay amid the twinkling lights in Yayoi Kusama’s infinity mirror room at the David Zwirner gallery in Chelsea. Malnourished by their phones and computer screens, people yearn for real-life visceral experiences. And yet they remain stuck in the gravitational pull of virtual reality: The experiences they seek are ones they can record on their phone cameras and post on social media. 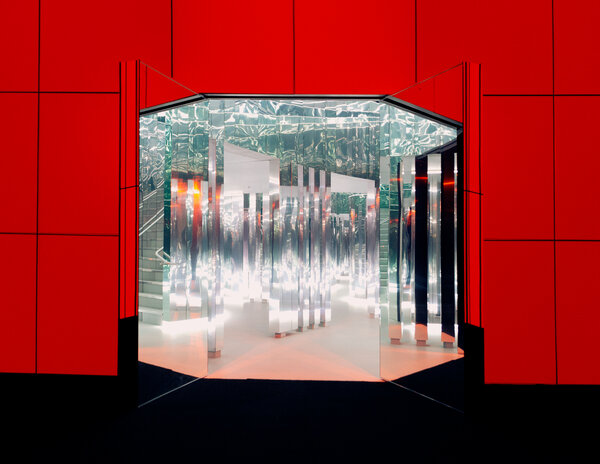 The renovated warehouse that Superblue occupies in Miami is across the street from a more traditional contemporary art institution, the Rubell Museum, which reopened at the end of 2019 in Allapattah, a commercial and working-class area west of its former location in the now-gentrified Wynwood district. Mera Rubell told Marc Glimcher, the chief executive of Pace, about the availability of the building when they happened to be seated next to each other at a large dinner. The structure contains 50,000 square feet of exhibition space, with 30-foot ceilings. It will display installations for a year or a year and a half before they are trucked off to other Superblue sites in yet-to-be-announced cities. “That’s something we have to do to make the economics work,” Mollie Dent-Brocklehurst, the London-based co-founder, told me on a Zoom call.

For the inaugural exhibition, Superblue included “AKHU” by James Turrell, the Southern Californian who is an éminence grise of the experiential art world. The installation is what Turrell calls a Ganzfeld, a German word that denotes the loss of spatial perception that occurs in a featureless, uniform visual field, such as a fog whiteout. (As with Schadenfreude, Ganzfeld has no English counterpart.) In “AKHU” (an ancient Egyptian term that roughly translates as “soul”), an oblong of light is projected onto a smooth blank wall and tints the room. The color of the light gradually changes. If you climb the black-carpeted steps toward the threshold of the illuminated wall, your sense of where you are teeters vertiginously.

Turrell’s Ganzfelds are not new to me, but “AKHU” provided a useful yardstick to assess the two other art installations in the show. A Ganzfeld creates a contemplative mood in which time slows and space dematerializes. At the same time, it exposes the structures of visual perception (and misperception) that make the magic.

But why was I resistant to the notion that a simple spectacle might also be art? Artists have never eschewed showmanship. Bernini was a theater artist as well as a sculptor. In one of his plays (a 17th-century predecessor of “Miss Saigon” and “Phantom of the Opera”), a torrent of water rushed toward the gasping audience, diverted by sluices at the last moment. Of course, no one remembers Bernini for his divertissements. We salute “Apollo and Daphne,” marveling at how a sculptor, using the intractable substance of marble, could depict the fluid transformation of a nymph into a tree. Art certainly can be entertaining, but it must also be enlightening or disorienting. When it only titillates, it loses its claim to be art.

The crowd-pleasing touring shows of immersive projections of van Gogh paintings, which have proliferated as vigorously as sunflowers over the last decade, are to art what military music is to music. Another enterprise, Meow Wolf (why do experiential art organizations have such terrible names?), promotes the artistic credentials of its immersive installations more credibly. Formed in Santa Fe, N.M., in 2008, Meow Wolf recently opened Omega Mart in Las Vegas and plans to inaugurate a space in Denver later this year. Omega Mart resembles a supermarket with weird sets and bizarre commodities, all of them crafted by participating artists.

Underlying Omega Mart is a narrative having to do with a sinister corporation, a mystery waiting for the visitor to pry out. When I asked its co-chief executive, Ali Rubinstein, how Meow Wolf differed from Disney — a question she was uniquely qualified to answer, because she had worked at Disney for over two decades — she emphasized that “Disney’s experiences are programmed, and there is an expectation about how a guest will move through a land or an attraction,” while “Meow Wolf is all about giving our visitors the opportunity to design their own experience and choose how deeply they want to dive into the narrative component.”

Tellingly, the fantasy novelist George R.R. Martin, whose books were adapted into the HBO series “Game of Thrones,” is a major investor in Meow Wolf. Omega Mart transposes the Pop Art critique of American consumer culture that was expressed in Claes Oldenburg’s “The Store” — a witty panorama of commercial products, staged in 1961 — to the realm of Minecraft.

Is it art or something else? A better question might be, is it good? Marcel Duchamp’s ready-mades, Tristan Tzara’s Dada performances, Robert Smithson’s land art, Tino Sehgal’s constructed situations — in innumerable ways, modernist artists have crossed and dissolved boundaries.

Es Devlin, whose “Forest of Us” is part of Superblue’s first exhibition, has worked as a theatrical designer for 25 years, creating celebrated sets for “The Lehman Trilogy,” Kanye West tours and “About Time: Fashion and Duration,” the Metropolitan Museum’s Costume Institute show last fall. Attending art school in London, Devlin admired the Young British Artists who preceded her, but, she told me in Miami, “I couldn’t get my head around making and selling an object. My natural world was the theater.” In the last five years, she has progressed from creating designs for other artists to acquiring “the confidence to write a narrative.”

“Forest of Us” begins with a film of almost three minutes, in which Devlin depicts branching — bronchi in the lungs, limbs of trees, rivulets into streams. The voice-over starts, “Every time I reach a fork in the road, I choose both paths,” and ends, “Can you find it? Go and find it!” At which point the screen parts, and the visitor walks through a portal into a maze. With stretched Mylar film on the ceiling, optical-glass mirror on the surrounding walls, and winding paths bordered by polished aluminum dividers, “Forest of Us” is a kind of hedge maze in which the traditional boxwood has been replaced by reflective surfaces.

Staring at my bounced-back image, I was reminded of Kusama’s visionary “Narcissus Garden,” an expanse of mirror balls lying on the ground. (First created in 1966 at the Venice Biennale, “Narcissus Garden” happens to be on view in a later format at the Rubell Museum.) But Devlin’s work envelops you. Eventually you come to a shallow pool, 6 feet wide and 35 feet long, where, standing on marked circles at the edge, you can raise your arms and see your reflection as a dendritic filigree and hear the whooshing intake of breath. Chilled, I felt I was standing by the bank of the river Styx, experiencing not my personal demise but the death of the planet.

At Superblue, the barrier between the viewer and the art work has evaporated, which is the long-stated mission of teamLab. One way to regard the group’s showstopping displays in Miami is that they allow a visitor to pass through a computer screen, just as the characters in Jean Cocteau’s film “Orphee” walk through mirrors. “What makes a boundary is the recognition of one by people,” Toshiyuki Inoko, a co-founder of teamLab, said, speaking through an interpreter as he tweaked the Miami installations shortly before the opening. “On a computer screen, once people recognize the screen it becomes a boundary. We are trying to eliminate or soften the boundary.”

Indeed, the largest of teamLab’s four exhibitions at Superblue Miami is devoted to two separately conceived works that have been interwoven. “Universe of Water Particles, Transcending Boundaries” is a digital waterfall that cascades down two walls and onto the shiny floor; coming into contact with a visitor’s feet, the stream parts. Concurrently, another work, “Flowers and People, Cannot be Controlled but Live Together,” is erupting with huge blossoms that grow and die. The flowers bloom on the ground only in those spaces that have been cleared of the watery image by the visitor’s presence.

The teamLab collaborative embraces its Japanese heritage most directly in a single-channel video, “Life Survives by the Power of Life II,” which transmogrifies the Kanji symbol for “life” into a tree branch passing through seasonal change in a dance of 3-D calligraphy. In another room, “Proliferating Immense Life, A Whole year per Year” displays a sequence of rendered flowers that grow huge and fly off as petals, leaving behind a grid of small gold-brown wall squares — an allusion to the gold leaf applied to the paper surface of a Japanese screen as well as (to my mind at least) bare winter fields shadowed by clouds. When my hand touched the flowers on the wall, I accelerated their dying — a caustic comment on humankind’s blight, as well as a ravishing rendition of the Japanese aesthetic of the ephemerality of beauty.

In 2018, Inoko convinced Glimcher to break a taboo and charge $20 for admission to a teamLab exhibition at Pace’s Palo Alto gallery. Pace represents several other artists whose experiential installations don’t lend themselves to conventional gallery sales: Leo Villareal, Random International, DRIFT. Pace was marketing their pieces to developers and governments. “They would be placed in shopping malls or on bridges,” Dent-Brocklehurst said.

The Superblue alternative model (which is not restricted to Pace artists) funds production of the work and pays royalties to the artists on ticket sales. A ticket to Superblue Miami costs $36, with a $10 add-on to see an additional teamLab project, “Massless Clouds Between Sculpture and Life,” an audience-tickling creation in which clouds of soap bubbles form, hover and dissipate as visitors walk through them.

Inoko told me that the cloud is like a virus, “at the boundary between what is living and isn’t living, and organic and inorganic.” Because of the coronavirus, Superblue Miami will initially operate at 50 percent capacity. It is better equipped than a conventional museum to meet that restriction. Shantelle Rodriguez, the director of experiential art centers for Superblue, said, “These artists have a very specific idea of the number of people who should be in a room to have the experience.”

For me, the immersive experience began, not entirely pleasantly, with my trip from New York to Miami, the first time I had been on an airplane in over a year. It continued with the alarmingly insouciant atmosphere in South Beach, where I returned to my hotel one evening to find a party of unmasked college students packed as tight as bedded asparagus by the swimming pool. In my discombobulated mood, the trippy, meditative, gorgeous installations of Superblue washed over me as a respite and solace. My resistance melted. My doubts subsided. Like the kids in my hotel, after a year of privation, I was ready to be seduced.