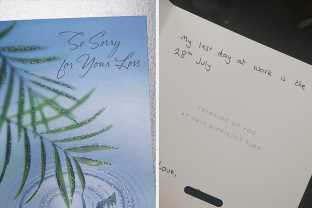 So whatever your occupation, I think it’s fair to say that job satisfaction isn’t always a guarantee.

Sometimes there comes a point when you think: “I’ve had enough.” That’s probably the right time to pursue greener pastures — or maybe invest in that passion you’ve always had.

And if you’re familiar with that breaking-point feeling, you’re probably also familiar with the sweet satisfaction of handing in your notice and hitting the countdown to freedom.

Well, it turns out that some people are not only walking away — they’re also letting their employers know that their pending departure is a massive loss for the company.

It all started when Twitter user @bitchitshan shared that one of her colleagues had submitted their notice in the form of a condolence card, informing the company that his last day at work would be July 28.

The outside of the card reads: “So very sorry for your loss” and was handed in by an outgoing coworker who will be leaving their call centre in Sheffield.

Turns out this wasn’t the first time.

20-year-old Deepak Singh from California told BuzzFeed News that he decided to let his boss know with a condolence card after he was called a “burden”.

He told BuzzFeed News: “I quit my job in that manner because I was very unhappy at that job, it was a high end luggage store. I was told by my boss that I was hanging by a thread and I was a burden to the store due to my performance.

“All that negative feedback inspired me to get a new job and I decided to write my resignation in a sympathy card because I know I’m not a burden to anybody.”

Now I’m convinced there are only two condolence cards in circulation.

Some people go the extra mile to really let their employers know that the company will never be the same without them.

“My thoughts and prayers are with you and the entire department as you attempt to move on. Please know while I am gone, I will never be forgotten,” wrote James after two years in customer care.

21-year-old Ireland Vass found her community in the thread and shared her own special card letting her boss know that she was breaking free.

Ireland, from Arizona, told BuzzFeed News how she quit her job as a supervisor at AMC theatres to go study in another state. She said: “Surprisingly, I had a great relationship with my management team and thought this would obviously be the most hilarious way to go. I also shoved two packages worth of glitter in the envelope so that when my boss would open it, he’d get glitter all over the carpet. It was genius, it totally worked.”

And for when you want to deliver the message with icing on the top, there’s always cake.

Ade Onibada is a junior reporter at BuzzFeed and is based in London.