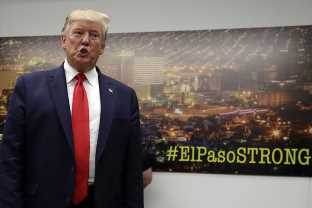 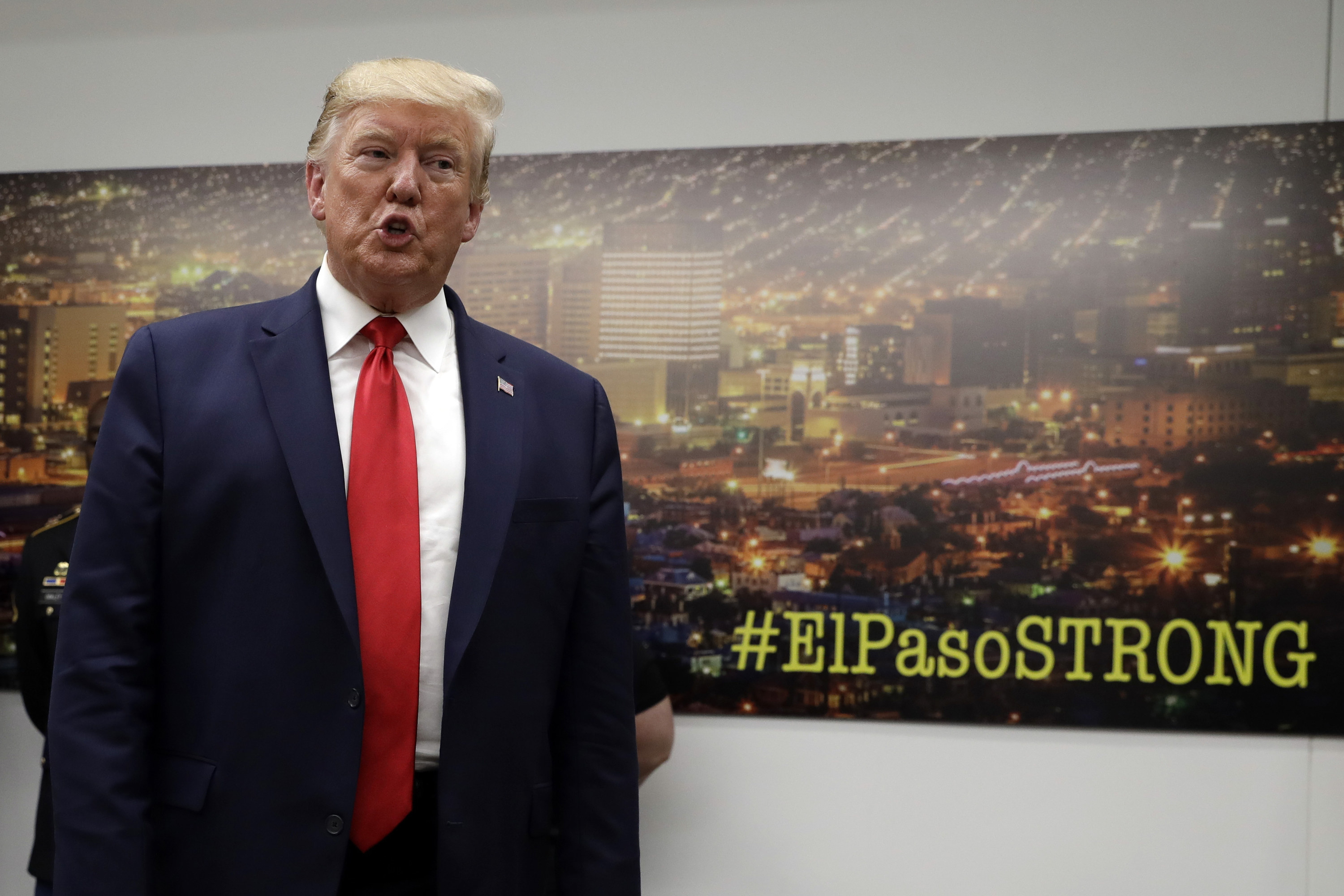 President Trump visited Dayton, Ohio, and El Paso, Texas, on Wednesday with plans to console victims and thank law enforcement after two mass shootings took 31 lives within a span of hours over the weekend.

He did — but he also found time to attack Democratic rivals, call Dayton’s mayor a “very dishonest person,” and endorse his favorite right-wing cable TV channel.

Notably absent from the president’s busy schedule: Apologizing for or walking back racist rhetoric which the El Paso gunman echoed in his white supremacist, anti-immigrant manifesto. Though Trump had earlier in the week called for national unity against hate, some El Paso residents said that didn’t undo the damage he had done.

But let’s start from the beginning.

As he and the first lady departed Washington, DC, he answered questions from reporters about whether his rhetoric was dangerous and needed to be toned down.

“I do think we’ve toned it down,” he said, adding that he was being attacked by other politicians. “I would like to stay out of the political fray.”

“I think my rhetoric brings people together,” he said.

The president arrived in Dayton around 11 a.m. local time, where he was greeted by local politicians before heading to a hospital that had treated victims after Sunday’s shooting.

The group of journalists that travel with the president weren’t allowed inside to document his meeting with victims, hospital staff, and first responders. White House press secretary Stephanie Grisham said the administration didn’t want to turn the visit into “a photo op.”

Trump and staff later tweeted multiple posed photos as well as a campaign-style video of edited clips set to music.

After the meeting, Dayton Mayor Nan Whaley and Sen. Sherrod Brown told reporters that victims and first responders were grateful to see the president and the first lady.

Brown and Whaley each said they told the president they wanted to see legislation in response to the tragedy.

“The people of Dayton are waiting for action from Washington, DC,” Whaley said she told Trump.

But the president wasn’t happy with how the Ohio Democrats described his visit.

When Whaley saw Trump’s tweets, she was surprised and confused — both she and Brown had said that people at the hospital were happy to see Trump. A Cincinnati Enquirer reporter captured her reading the tweets for the first time in a video.

“I’m really confused. We said he was treated very well. I don’t know what they’re talking about misrepresenting,” Whaley said. “Oh well. He lives in his world of Twitter.”

On the flight from Dayton to El Paso, Trump showed he had turned his thoughts from victims and first responders to the 2020 presidential campaign.

“Watching Sleepy Joe Biden making a speech,” he tweeted. “Sooo Boring! The LameStream Media will die in the ratings and clicks with this guy.”

He also made a jab at Fox News, saying he now preferred the cable TV network One America News, a far-right outlet with a history of spreading conspiracy theories.

Trump landed in El Paso around 2:30 p.m. local time, then headed to a hospital to meet victims and staff. Outside, protesters gathered in the heat and some chanted for him to go home.

“Let me say this clear and loud: Trump is responsible, and he is part of the problem,” a protest organizer roared as the crowd cheered. 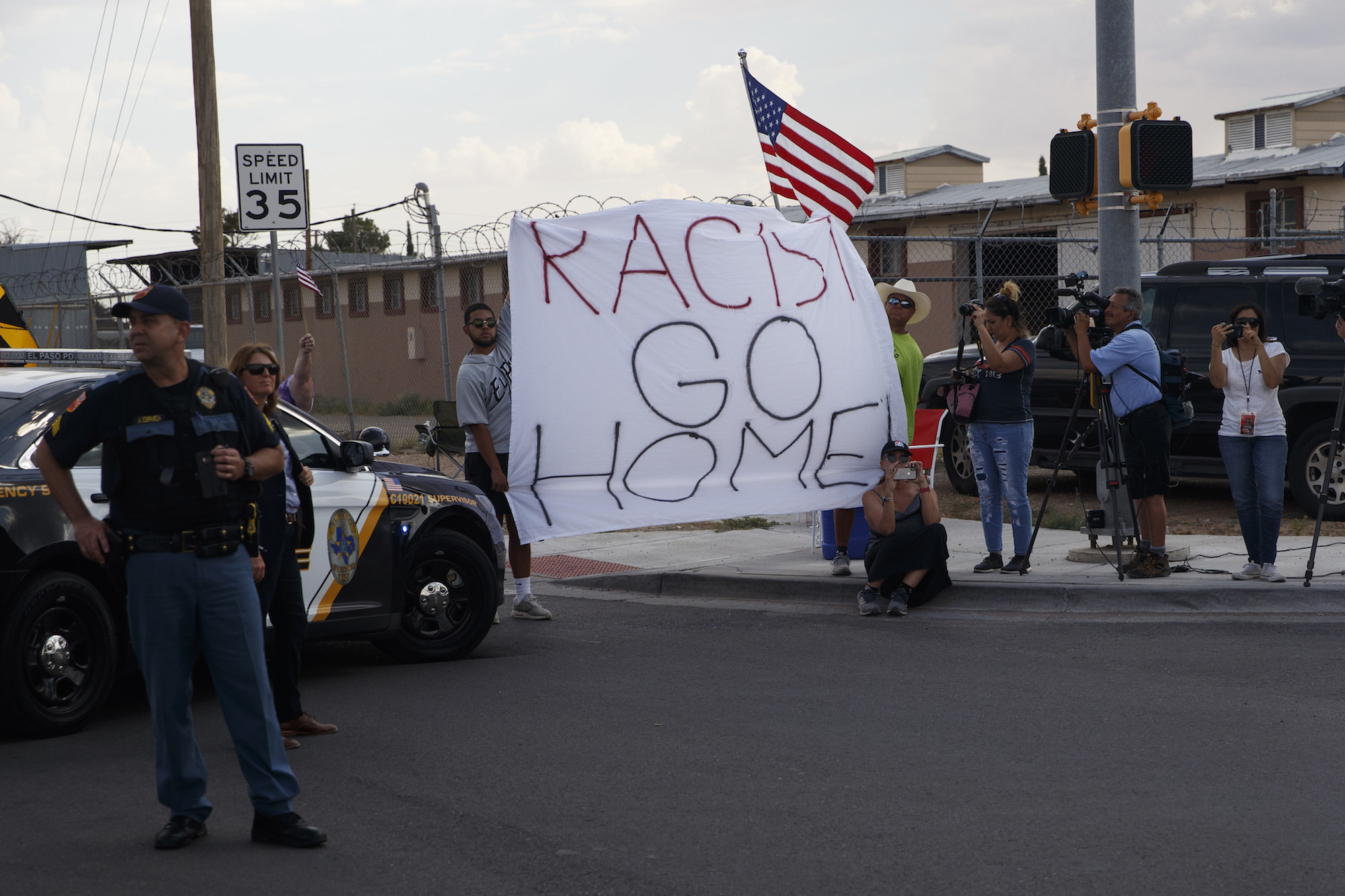 The president then headed to the city’s emergency operations center, where he met with first responders including El Paso Police Chief Greg Allen. Trump called Allen “a winner” and praised law enforcement for their response and coordination to Saturday’s shooting.

While shaking hands and signing a few autographs, Trump also spoke with officers about the gunman’s surrender and arrest.

The president then talked about the crowds at his rally in El Paso in February. His campaign still owes the city more than $500,000 for the event, according to an invoice.

“We could have sold it out four times,” Trump said.

After continuing to praise law enforcement as heroes, Trump departed for the White House. On the flight back, he once again turned to Twitter to disparage a Democrat rival.

He then returned to his theme at the beginning of the day, calling the media “fake news.”

Democrats, he added, were “truly disgusting!”