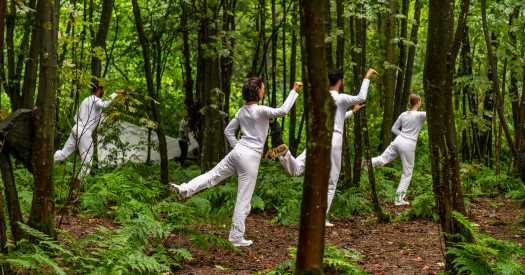 EDINBURGH — The five Trisha Brown dances at the Edinburgh International Festival here were, as the title “In Plain Site” suggests, site-specific: four locations in Jupiter Artland, a contemporary sculpture park 10 miles west of the city’s center. The amalgam of dance and place was revelatory; the dance animated the landscape.

Brown, who stopped choreographing in 2011 and died in 2017, was a central figure in the postmodern dance experimentation that began in the 1960s. But her post-1980 dances, made for proscenium-arch theaters, are usually what have shown the most enduring vitality. In this Edinburgh anthology, her pre-1980 work proved especially enthralling and poetic.

The performance began and ended in an area of the gardens that Charles Jencks landscaped as “Cells of Life” earlier this century. The audience stood on tiered green turf mounds that might have been designed for an ultra-manicured golf course. In an excerpt from Brown’s “Another Story as in Falling” (1993), accompanied by a quiet score by Alwin Curran, nine dancers, dressed in white, created slowly shifting patterns across the lawn. With their generally upright stance and regular reconfigurations, punctuated by sudden lunges and one-legged balances, this might have been a deconstruction of cricket. But an inner rhythm gave it a secret life, as if the group were an organism. 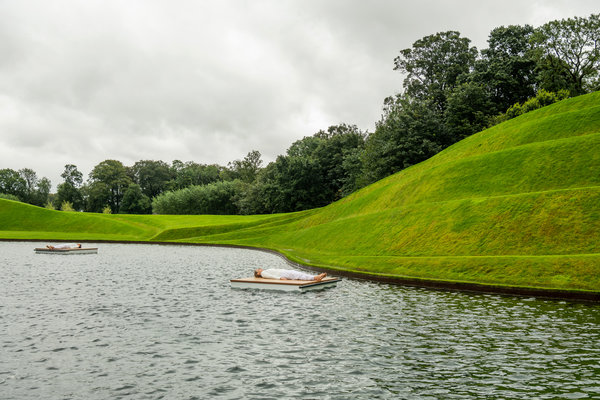 Magic began with the next pieces, choreographed between 1970 and ’75. The audience was led into a grove, where four dancers — each standing barefoot on a small wooden platform — performed “Locus” (1975), a formal number in silence. The separate contributions of limbs, spine and changes of direction all built up a sense of private mystery. Here and there the cool composure of the movement had marvelous touches of liquidity: The lift of a leg when combined with a body pivot became silken, rapturous.

As the performers moved in synchronicity, the spacing of the platforms lent enchantment. Although it was hard to see more than two dancers at a time, there were moments when other white-clad limbs could be glimpsed further along within the wood echoing the movement. The effect — a glimmer, a trace — was luminous, as in a Victorian fairy painting.

Other dancers usurped those platforms for “Accumulation” (1971). Here there was music (the Grateful Dead’s “Uncle John’s Band”) and more of that liquidity of phrasing. Brown’s work was always concerned with unorthodox physical coordination: In “Accumulation,” each dancer stayed vertical while arms, pelvis, legs and feet all play separately rhythmic roles. The effect was sensuous, sexy, purposeful, like some strangely seraphic disco routine. Again, to see glimpses of the same dance echoed by other dancers further along the grove was breath-catching. The dancers became the true inhabitants of the forest, the audience mere visitors.

Wackiest was the “Floor of the Forest” (1970). A rope network was stretched, three or four feet above the ground, like a loose canvas (or like a forest’s floor) suspended within a horizontal framework. Items of clothing were threaded into the ropes. Two men spent 15 minutes putting on the items of clothing, inserting themselves into sweaters and trousers, then hanging there in these garments — like sloths or bats — before moving onto the next pieces of apparel. This was dance as physical task or problem solving. Performed in a businesslike way, it became memorably comic.

Spectators were then led back to a different part of the “Cells of Life” landscape, where the green-turf-tiered mounds had views over four lakes. On two of the nearer lakes, four dancers were afloat, each motionless on a raft as if lifeless on a bier. On Friday, the sunset glow of the evening sky was reflected in the water. Then the four dancers began “Raft Piece” (1973) — remaining horizontal, mainly on their backs, lifting knees, stretching legs, extending arms, sometimes turning onto their sides.

There was no music; or rather they became the silent music, the sole source of phrasing. (Occasionally a bell rang; a few birds flew over.) Their movement made the rafts gently travel; the ripples in the water fragmented the reflections of the sunset. The movement proceeded with its own inner tranquil motor-rhythm: all four amazingly in unison for most of the piece, the pairs on each lake later developing a separate dance. Fifteen minutes of this idyll passed, quietly transporting. These four dancers, lying there on the water, became the soft pulse of the surrounding Scots Lowland scenery.

Other examples of dance have been spread across the Edinburgh International Festival and the Edinburgh Festival Fringe. The all-male British dance company BalletBoyz is appearing at the Fringe in “Them/Us,” an hourlong, two-part program that grew from “Us,” a duet made by Christopher Wheeldon for the company last year. Mr. Wheeldon has now expanded this for six dancers, to music by Kennard Henson. Company dancers have collaborated to make “Them,” to music by Charlotte Harding.

“Them” looks ultra-schematic, choreography by the numbers, with human social behavior looked machine-processed, but “Us” shows many of the gifts that have made Mr. Wheeldon one of the world’s foremost choreographers: contrasts of dynamics and shapes, a constant tension between form and feeling, a natural command of stage geometry.

Nonetheless “Us,” though exquisitely performed, doesn’t feel sincere for a minute. In the climactic duet, two men (Benjamin Knapper and the exceptional Liam Riddick) behave like an advertisement for mutual responsiveness in partnering. As in Mr. Wheeldon’s “Bound To” (2018), the same-sex partners behave like clones, taking turns in every kind of supportiveness. The result looks beautifully phony.

Alastair Macaulay was the chief dance critic of The Times from 2007 until 2018. @AlastairMacaul3