House Democrats voted on Thursday to strip Representative Marjorie Taylor Greene of her committee assignments, while House Republicans chose to stick by her after she expressed remorse for past comments about 9/11 and school shootings. She blamed her past support for QAnon on misinformation that she found on the internet.

“Yes, people: Marjorie Taylor Greene has been kicked off her committees. But if you think about it, this is a pretty sweet deal for Greene. Basically, her punishment for acting insane was to do less work for the same amount of money.” — TREVOR NOAH

“But if she’s not in charge of education, who’s going to tell all those students that there never really was a shooting?” — STEPHEN COLBERT

“And, honestly, I think kicking her off these committees could actually backfire. The last thing you want to do with a crazy person is give them time to be crazy. That’s why they should put her on all the committees — then you’ll never hear from her again.” — TREVOR NOAH

“Online, Greene also has endorsed the idea of executing Democratic leaders. Kind of a bad look when you’re OK with your new co-workers getting murdered: ‘Hey guys, I cannot wait to join the team. Tell you what, I’m going to cut your hamstring and give you a 30-minute head start before I hunt you with a crossbow.’” — STEPHEN COLBERT

“Looks like someone started listening to the reasonable voices in her head. Although, this woman is so crazy that her saying that 9/11 happened makes me go, ‘Wait, did it?’” — TREVOR NOAH

“You know what? This may come as a surprise to you, but those of us who watched those buildings burn with our bare eyes here in the New York City area are not that impressed with your willingness to admit that it happened. I believe we as a nation promised to ‘always remember’ it happened. What’s her bumper sticker say, ‘9/11 — oops, I forgot’”?— STEPHEN COLBERT

“All right, well, at least now we know 9/11 happened. Can you imagine having to go in front of the House of Representatives to say 9/11 happened? Yeah, we know. We know it happened. You’re the crazy one, not us.” — JIMMY KIMMEL

“Oh, my God, thank you, it is so big of you to admit that. What else would you like to clarify? ‘[Imitating Greene] I would also like to make clear that “Inception” is just a movie, “RoboCop” is not real, and the giant glowing orb in the sky is, in fact, the moon and not a secret sky bank where Bill Gates keeps all his gold bars.’” — SETH MEYERS

“But, hey, I’m glad that she’s come around to the standard Republican belief that school shootings are real and that nothing should be done to stop them.” — TREVOR NOAH

“But, yes, you see, it’s all Facebook’s fault for ‘allowing’ her to believe in those things. So don’t blame her — blame Mark Zuckerberg, with his social media lies and his space lasers.” — TREVOR NOAH

“That’s right, the woman who started impeachment proceedings against Joe Biden the day he took office is calling for unity now. The congresswoman who wants to execute Nancy Pelosi is right. We need to come together, and the media is just as guilty as QAnon! That’s like saying Jell-O is just as guilty as Bill Cosby.” — JIMMY KIMMEL

“The worst part of this, she has still not been reprimanded in any official way by fellow Republicans in the House. In fact, they gave her a standing ovation yesterday. Some of them, not all of them. Some of them didn’t want to stand up for fear they could be targeted by Jewish space lasers.” — JIMMY KIMMEL

“Now, look, man, Marjorie Taylor Greene isn’t the first person to believe things that she read on the internet. But her defense isn’t really reassuring because, basically, what she’s saying is, ‘Yes, up until now, I believed that school shootings were fake, 9/11 didn’t happen and that Jewish space lasers blew up California. But that’s only because I am incapable of separating fantasy from reality. So let’s do the right thing and let me go back to making laws.” — TREVOR NOAH

The Punchiest Punchlines (You Can’t Fire Me, I Quit Edition)

“After the Screen Actors Guild criticized Trump last month, today he sent a letter saying that he’s quitting the union. Trump’s out of work and just quit his union — even worse, now if he wants medical coverage, he’s got to sign up for Obamacare.” — JIMMY FALLON

“He sent them a scathingly stupid letter that begins, ‘I write to you regarding the so-called disciplinary committee hearing aimed at revoking my union membership. Who cares?’ Oh, I know! The guy who took the time to write a letter, who also has skin so thin it makes phyllo dough like Kevlar?” — STEPHEN COLBERT

“So he’s now out of the actors’ union. That’s too bad — I was positive he was going to be the next James Bond.” — JIMMY KIMMEL

“Meanwhile, Melania heard and was like, ‘Um, Donald, while we’re on the subject of leaving unions.’” — JIMMY FALLON

“One day you’re the most powerful man on earth, the next you’re bragging about your one line in ‘Home Alone 2.’” — JIMMY FALLON 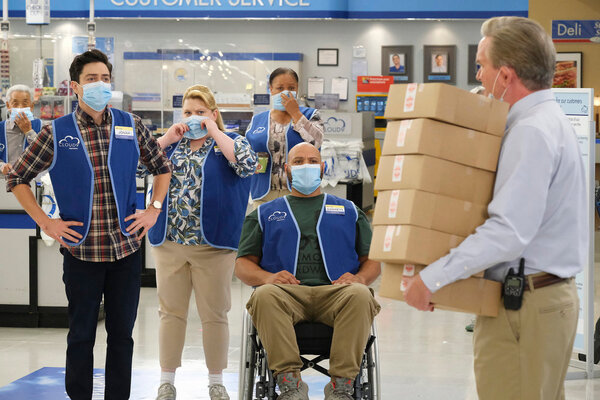 Television shows now in production are trying to predict whether viewers will want to see the reality of the pandemic reflected onscreen, or if they’d prefer a distraction instead.