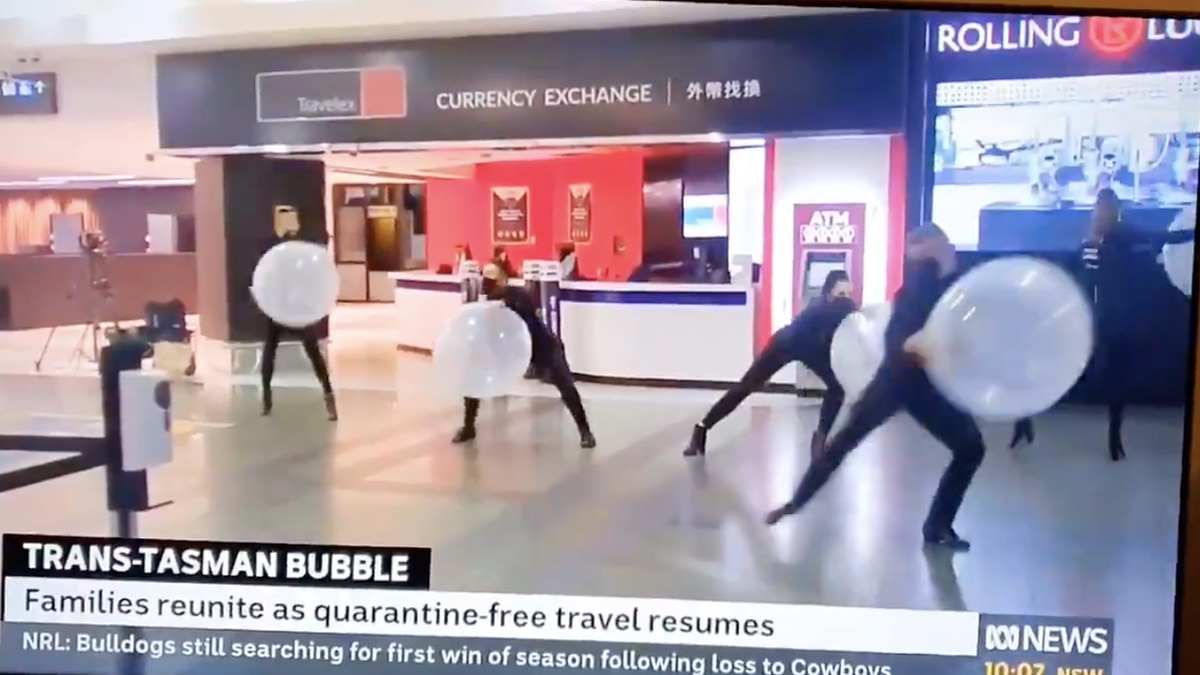 The international arrivals area of an airport is, without a doubt, one of the happiest places on Earth – and that has been particularly the case today across Australian and New Zealand airports, as international flights between the two countries took off for quarantine-free travel for the first time since the pandemic began.

Across both sides of the Tasman, celebrations over the opening of the Transtasman bubble took many forms today. From in-flight champagne to long-awaiting hugs to the sound of live music, New Zealanders and Australians have been showing how much they’ve missed each other and how happy they all are to be able to form one big bubble and get together again.

Among the airport celebrations, there was … this one. A group of Australian dancers, wearing black outfits with black masks, held big clear balloons as they expressed themselves through the means of interpretative dancing all around the terminal.

Footage of their performance made it onto Twitter where viewers were puzzled by what they were seeing.

“Every day I wake up trying not to feel disdain towards the human race and every day the human race rises to the challenge,” said Greg Larsen, in a tweet accompanying a five-second clip.

The footage has since been retweeted hundreds of times, by both Australians and New Zealanders, who almost unanimously agree that it was at least a bit of a weird way to celebrate the milestone.

“Australia, are you ok?” one person posted, sharing the video.

“Look, if NZ decides to close the borders again I completely understand,” another person said.

“Unfortunately in our isolation we have become quite insane,” another Australian Twitter user added.

“Bloody hell. Is it too late to close the bubble?,” another Twitter user wondered.

“Choices were made and I think it was by the people who made decisions about the naval ship commissioning,” someone said, referencing the recent scandal surrounding the video of the dancers twerking during a navy ship launch in Australia.

Over our side of the Tasman, there was Māori dancing welcoming travellers into Wellington airport as well as multiple live renditions of Dave Dobbyn’s classic “Welcome Home/Nau Mai Rā” playing as people arrived in Auckland.

The two-way travel bubble between New Zealand and Australia finally begun today, after more than a year of closed borders.

The first passengers of quarantine-free travel from Australia started to arrive at Auckland International Airport shortly after the plane touched down at 12.30pm this afternoon.

The transtasman bubble is just the second travel bubble in the world between countries still committed to keeping Covid-19 out. The first travel bubble was established between Taiwan and Palau.