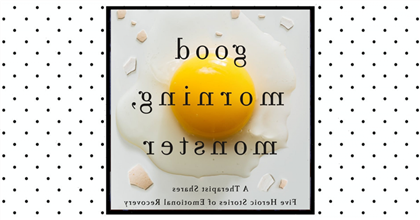 Good Morning, Monster, the memoir from Canadian psychologist Catherine Gildiner, is being turned into a podcast, with TV and film adaptations also in the pipeline.

It’s safe to say, we’re a fan of the podcast format and Good Morning, Monster is the latest to join the ranks.

The popular memoir, from Canadian psychologist Catherine Gildiner, covers five of Gildiner’s most memorable cases from her 25 years in private practice as a psychotherapist. Now, it’s being adapted as a podcast, before on-screen plans for film and television commence.

A Slight Change Of Plans: Apple Podcasts’ best show of the year is now being adapted as a docuseries

The book includes individuals who overcame enormous trauma and whom Gildiner considers “psychological heroes” so if you’re a fan of heroism, first-class storytelling and feeling inspired, this upcoming podcast sounds like the one for you.

“In this fascinating narrative, therapist Catherine Gildiner presents five of what she calls her most heroic and memorable patients. Among them: a successful, first generation Chinese immigrant musician suffering sexual dysfunction; a young woman whose father abandoned her at age nine with her younger siblings in an isolated cottage in the depth of winter; and a glamorous workaholic whose narcissistic, negligent mother greeted her each morning of her childhood with Good morning, Monster.

“Each patient presents a mystery, one that will only be unpacked over years. They seek Gildiner’s help to overcome an immediate challenge in their lives, but discover that the source of their suffering has been long buried.”

The book was published in September 2019 and has been praised by the likes of Glennon Doyle, who listed it as her favourite book of 2020 on Good Morning America. She said: “We need to read stories about folks who have been through hell and kept going… Fascinating.”

Dear Media, the female-focused podcast company behind audio series The Dissenters, will be adapting the book as a podcast. We know that the entire first season will cover one patient’s journey to healing, with it slated to launch in early 2023.