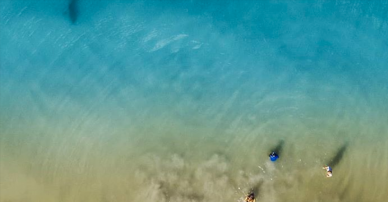 After a busy Sunday at Florida’s New Smyrna Beach, photographer Dan Watson was about to pack his children into the car when he decided to take some last minute snaps using his drone to post on Instagram.

“Within 30 seconds of getting the drone up into the air is when I started seeing the shadow moving through the water,” said Watson, 35

The shadow was a shark, swimming just feet away from where five children, including his kids Landon, 5, Jonathan, 6 and Grace, 9, were splashing in the shallows.

Watson, a professional photographer who lives in Orlando, said he watched the animal appear on his phone screen via the drone and immediately yelled “shark!”

“I’m screaming at my wife, who is a little bit closer to the kids, and we’re running out to get them and yelling at them to get in,” said Watson.

In the middle of the mayhem, Watson clicked the drone controller to take a photo.

“During that moment, I was worried that they wouldn’t get out in time,” said Watson. “It looked very close on the drone camera, from what I was seeing, and it was moving fairly quickly.”

In the photo, which looks like a Jaws movie poster taken from another angle, the shadow of a shark can be seen swimming towards the shore.

“I know there are sharks in the area, I do not think — or did not think — they are in shallowish waters… where people would generally be,” said Watson.

Seconds later, Watson clicked another photo, which shows the children sprinting in fear towards the beach and the shark heading in the opposite direction.

“It’s kids, you never quite know if they’re going to instantly respond,” said Watson. “Thankfully they did get that terrified response and started running very, very, quickly.”

His littlest two felt scared in the immediate aftermath, but have since become curious about studying sharks. His daughter is now nervous about swimming — as is his wife, Sally.

“It will be a little while before she lets the kids back in the water,” said Watson.

The type of shark is unknown. But one week later, a shark attacked a surfer at the exact same beach. An 18-year-old was paddling his board when a shark bit his foot. That attack happened at the same area of the beach, according to Watson.

He noted that since the shark fin wasn’t visible, it was near-impossible to spot the animal from where he stood on the beach.

“There would have been no way to have known or seen about this from any way, except that I happened to fly the drone at that moment in time,” said Watson.

A few hours later, Watson and his wife looked at the high-resolution images on a big screen together. It was a moment of “heavy realization,” said Watson, the shark’s outline just a few feet away from their children.

“That’s when we were like ‘wow, that was close,'” said Watson.

“It makes me a little weary of the water for now,” he said. “I think we’re going to practice building some sandcastles next time we go.”