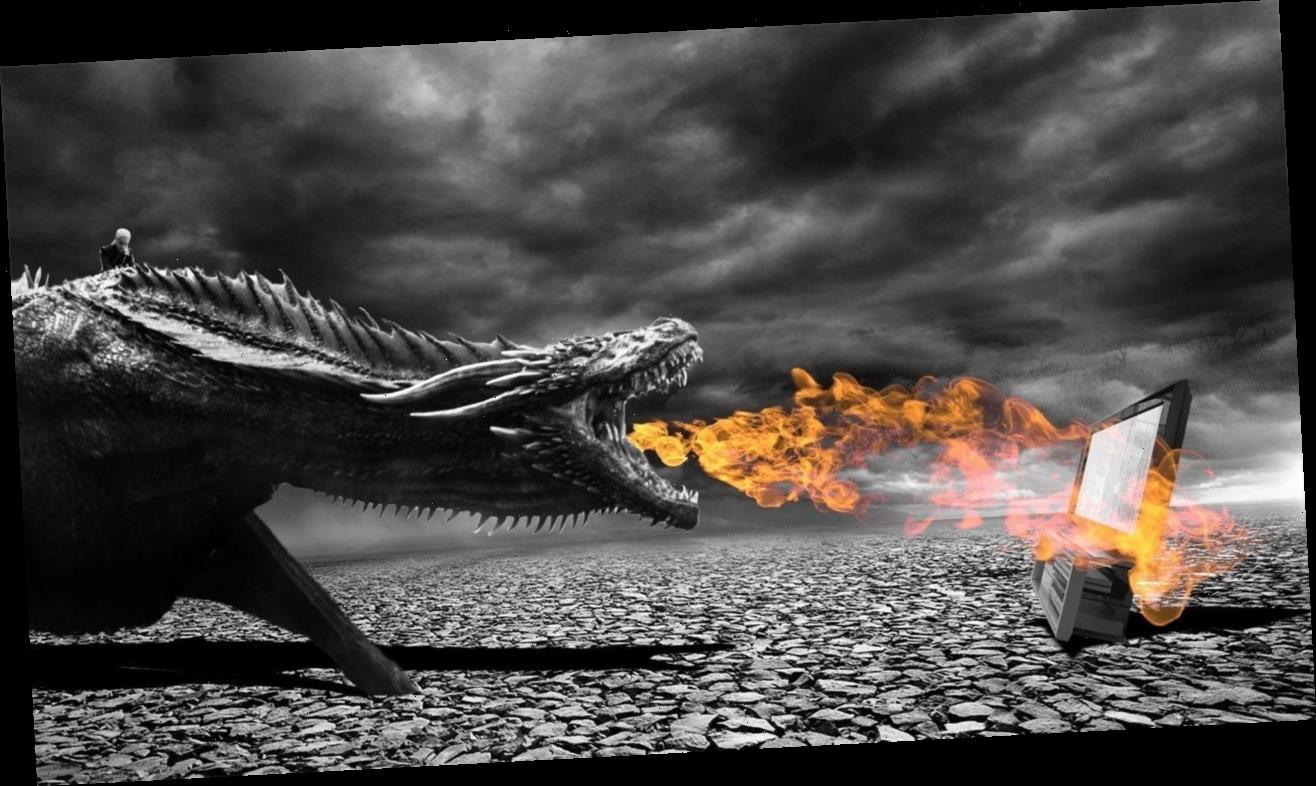 Bassem “Bear” Dahdouh was hopeful when “Game of Thrones” first premiered on HBO in April 2011. Although he hadn’t read a single word of George R.R. Martin’s “A Song of Ice and Fire” book series, he was a fan of actor Sean Bean and decided to give the medieval fantasy series a shot.

He was immediately hooked.

“The series premiere had everything — action, drama, horror and a twist,” Dahdouh, an esports professional from Las Vegas, told HuffPost, noting that the show’s performances and thoughtful pacing kept him coming back for more.

And he wasn’t alone. A legion of devoted fans became enraptured with “Game of Thrones,” a compelling story about powerful families — the Starks, Lannisters, Baratheons and Targaryens — fighting for control over the fictional world of Westeros. By the final season, which aired last year, an average of 44.2 million viewers were tuning in per episode.

Although the final installment saw record-breaking ratings, many critics and fans agree that the conclusion torched everything to the ground. Arya Stark (played by Maisie Williams) killed the Night King, beloved heroine Daenerys Targaryen (Emilia Clarke) turned bad, Jon Snow (Kit Harington) — the rightful heir to the Iron Throne — was shipped back off to the Night’s Watch, and Bran Stark (Isaac Hempstead Wright) — the all-seeing Three-Eyed Raven — became king. (Because “who has a better story than Bran the Broken?”)

The abbreviated season, which consisted of six extended episodes, threw character arcs out the window and rendered all the moments that came before it meaningless as showrunners David Benioff and D.B. Weiss made a mad, lazy dash toward the finish line.

Despite prior seasons receiving widespread acclaim, Season 8 got the lackluster reviews it deserved. Many viewers agreed that it felt rushed, and that big battles and impressive visuals took precedence over believable storytelling. Though it took home the Emmy Award for Outstanding Drama Series, the final season was ignored by the Golden Globes and has now been mostly disregarded.

Two months after the series’ end in May 2019, HuffPost caught up with fans at San Diego Comic-Con, many of whom said things like they “lost friendships over what happened” and that the final season was a “slap in the face.”

A year later, reactions to the finale don’t seem any better.

“I used to rewatch the show outright every year at least twice before each season’s start, but I haven’t rewatched a single episode since the finale a year ago,” Dahdouh said. “I can’t stomach the show knowing how bad it ends.”

It does feel strange that “Game of Thrones” isn’t enjoying a resurgence when streaming data shows that general TV viewership has been increasing during the ongoing coronavirus pandemic. Binge-watching on Hulu has gone up more than 40% since the beginning of March, with shows such as “Lost” and “Scrubs” doubling in engagement since last year, a Hulu spokesperson told HuffPost. And according to the piracy tracker Muso, visits to film piracy websites rose 41% in the United States during the last seven days of March compared to the same time period the previous month.

It appears that the culmination of “Game of Thrones” might have been so disappointing that it was able to erase the rewatchability of some glorious episodes.

Like Tyrion walking among the smoldering ruins of King’s Landing, it’s surreal looking back at what became of Season 8.

The first two episodes of the season had their faults, but the real problems popped up in Episode 3, which featured the Battle of Winterfell. This particular fight between the living and the undead White Walkers had been teased since the beginning of the show. The episode, which was ominously titled “The Long Night,” lasted just 82 minutes. And although viewers were excited to watch the epic war unfold, the No. 1 criticism of the episode was how dark it was. It was so hard to see the action in “The Long Night” that cinematographer Fabian Wagner had to defend his work.

Sheer devastation was teased, but the White Walker threat turned out to be more of a bluff. Many characters comically avoided their demise — ahem, Samwell Tarly (John Bradley) — and in a shocking twist, Arya destroyed the Night King with one thrust of her dagger. Rather than a triumph, this move was seen as manipulation since Jon Snow’s seasons-long journey to destroy the leader of the undead became irrelevant.

Using Arya for shock value underscores the main problem with the final season: showrunners Benioff and Weiss went for style over substance.

Daenerys burns King’s Landing because the show spent years hinting at it because she sees her dad’s old house﻿? And after being completely wiped out by the White Walkers, the Dothraki are all gone the Dothraki show up again in the final episodes.

The show’s lack of logic was exposed by the showrunners in HBO’s “Inside the Episode” videos. To justify Daenerys losing a dragon to Euron Greyjoy (Pilou Asbæk), Benioff gave the explanation that launched 1,000 memes, saying the Mother of Dragons ”kind of forgot” about the Iron Fleet. This was after a previous scene in the show that showed Daenerys specifically being reminded of Euron. (Did the showrunners kind of forget about that, too?)

The results are, pun regrettably intended, Stark. The final season of “Game of Thrones” has a 31% audience score on Rotten Tomatoes. (To put that into perspective, even “Sharknado,” a movie about shark-filled tornadoes, managed to squeeze out a measly 33%). Also, that viral petition calling for the final season to be remade is still gaining traction to this day, currently sitting at 1.8 million signatures. The negative online chatter was so relentless that it made its way into the cast’s WhatsApp chat, and the showrunners dropped out of a scheduled appearance at last year’s Comic-Con apparently to avoid in-person criticism. Benioff and Weiss also reportedly ditched the opportunity to work on “Star Wars,” partly to escape future backlash.

“I didn’t like the ending because it felt sudden and confusing,” Dahdouh said. “[There were] a lot of holes and skipping around. And I think the shift to more action was the problem. I didn’t tune in to the show to see epic battles every other episode. I was completely fine with one battle every season.”

Yes, Season 8 featured some incredible visuals. The production team put together a spectacle of nonsensical set pieces, apparently assuming that’s what fans wanted. (Episodes such as “Battle of the Bastards” are often praised as some of the show’s best.) But “Game of Thrones” didn’t become a global phenomenon just because it looked cool. Viewers were gripped by the compelling characters and fantasy elements. They came for the storytelling.

Long before the HBO show was even a twinkle in Weiss and Benioff’s eyes, fans were poring over the pages of Martin’s book series and stalking online message boards speculating about Jon Snow’s true parentage. But that was based on detailed reasoning, not just what would be shocking. The most popular theories, even about a story involving zombies and dragons, made sense.

So that’s what we hold onto: hope that Martin’s tried-and-true storytelling can fix what the final season burned to the ground. Given that Martin created the series, his input in the first four seasons of “Game of Thrones” was pivotal to the show’s success. By Season 7, the writing was clearly weaker as the show moved ahead with shortened seasons. (Gendry ran faster than Usain Bolt, and time seemed to not matter.) Yes, Martin told them how the story should end, but without his guidance, the showrunners’ scripts fell into bad fan fiction territory.

“It definitely felt off when the show got past the books,” Dahdouh said. “From my perspective, if they had Seasons 7 and 8 with 10 episodes each, going in on character development and the journey rather than the epic fights, I think the show could have done much better.”

Martin is still set to release the final two books in his seven-part series, “The Winds of Winter” and “A Dream of Spring,” as fans have already been waiting a very long time for new material — since 2011, to be exact. He had planned to release both novels before “Game Of Thrones” came to an end, but instead it’s been a nine-year wait filled with Targaryen history books and prequel series discussions. (“House of the Dragon” is moving forward at HBO, but with film productions shut down due to the pandemic, who knows if it’ll hit its 2022 release date?)

When HuffPost reached out to Martin’s manager, Vince Gerardis, for an update, he said the author was “locked away and healthy, writing his book. Big DO NOT DISTURB sign on his door.”

Martin himself wrote a blog post at the start of quarantine, saying he was holed up in New Mexico.

“Truth be told, I am spending more time in Westeros than in the real world, writing every day,” he wrote. “Things are pretty grim in the Seven Kingdoms … but maybe not as grim as they may become here.” Last month, he updated fans once again, saying he was still social distancing in the mountains and writing.

“I have good days and bad days,” he said. “But I am making progress.”

How nice would it be to have “The Winds of Winter” to devour while stuck at home? Too nice. When considering the pace at which Martin works, a new book might not arrive for many more months, or even years. But he did say that if the novel isn’t complete by summer, fans have permission to imprison him in a cabin on New Zealand’s White Island “overlooking that lake of sulfuric acid, until I’m done,” he wrote on his website.

In one of the first panels at the 2019 “Game of Thrones” fan convention Con of Thrones, The Ringer’s Jason Concepcion was frank about the state of things.

Ahead of the final season, Benioff told Entertainment Weekly, “A good story isn’t a good story if you have a bad ending.”

While rewatching “Breaking Bad” or “The Sopranos” only adds to a fan’s understanding of the series, the eighth season of “Game of Thrones” soured the greatness that came before it. Why would anyone want to watch the entire show over again — picking through useless Easter eggs and theories — knowing how it all comes to an end? They probably wouldn’t.

“From my perspective, if the Night King killed everyone, that would have been a more satisfying ending,” Dahdouh said.

No conclusion was going to be universally loved, but the season finale backlash isn’t necessarily about what happened — it’s about how it happened. The storytelling suffered, and the result is unforgettable in all the wrong ways.

So for us, our watch has finally ended.