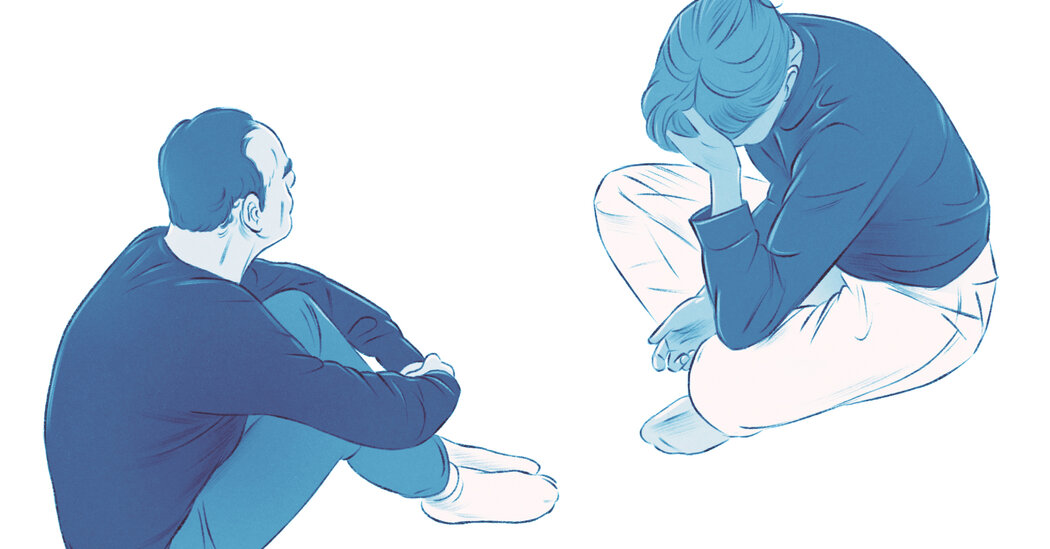 Scientists know that the intense stress of grieving can affect the body in various ways, but much remains a mystery.

In 1987, when my 18-year-old son was killed in a train accident, a chaplain and two detectives came to my house to notify me. I didn’t cry then, but a wall came down in my mind and I could do nothing except be polite and make the necessary decisions. When friends and relatives showed up, I was still polite, but the wall had now become an infinite darkness and I was obviously in shock, so they took over, helping me to eat and notify people and write death notices.

I’ve been thinking a lot lately about the more than 565,000 people who have died from Covid-19 in the United States. Each of them has left, on average, nine people grieving. That’s more than five million people going through the long process of grief.

Manisha Patel, a senior business systems analyst in Bensalem, Pa., lost her father, Ramesh Patel, to Covid-19 in June. “I have been through the toughest time of my life,” she said. “I feel heavier, but I weigh no more and I eat less. And there’s a lot of gray hair I didn’t have. My heart aches for him, it longs for him, it looks for him.”

When someone you love dies, experts have a pretty good sense of the path that grief takes through the mind, but have only a general sense of how it progresses through the rest of the body. First is a shock in which you feel numb or intensely sad or angry or guilty or anxious or scatterbrained or not able to sleep or eat or any combination of the above. During those first weeks, people have increased heart rates, higher blood pressure and may be more likely to have heart attacks. Over their lifetimes, according to studies done mostly on bereaved spouses, they may have a higher risk for cardiovascular disease, infections, cancer and chronic diseases like diabetes. Within the first three months, research on bereaved parents and spouses shows that they are nearly two times more likely to die than those not bereaved, and after a year, they are 10 percent more likely to die.

With time, most people stabilize; they begin to learn — gradually and on their own timeline — how to more or less continue with their lives and function in society. But studies suggest that after six to 12 months, about 10 percent of bereaved people have not begun to function better. They get stuck in what’s called “complicated grief”: they stay completely preoccupied with loss and persistent yearning, and remain socially withdrawn.

Scientists know that grief is not only psychological, it’s also physical. They know that it causes the brain to send a cascade of stress hormones and other signals to the cardiovascular and immune systems that can ultimately change how those systems function. But nobody knows how those systems act together to create the risks of diseases and even death.

One reason scientists don’t know more about the biology of grief is that only a handful of researchers study it, and they are usually psychologists with biological interests. Mary-Frances O’Connor, a psychologist who researches grief at the University of Arizona, studies both the psychology of grief and its biological changes in the laboratory and is one of the few researchers who straddles both fields. Hybrid science is seldom funded well; grief is neither a disease nor is it classified as a mental disorder, and the main funding agency, the National Institutes of Health, has no single established channel for funding it.

Nevertheless, researchers have found enough people to take surveys and get blood tests and scans to note some patterns.

Chris Fagundes, a psychologist at Rice University, said that in his own lab, he and his team have found links between grief, depression and changes to the immune and cardiovascular systems. In one study published in 2019, he and his team performed psychological assessments on 99 bereaved people about three months after the deaths of their spouses, and then took blood samples. Those who experienced higher levels of grief and depression also had higher levels of the immune system’s markers for inflammation.

“Chronic inflammation can be dangerous,” Dr. Fagundes said. “It can contribute to cardiovascular disease, Type 2 diabetes, some cancers.” In another study of 65 people, published in 2018, Dr. Fagundes and his colleagues found that bereaved spouses who had higher levels of markers for inflammation also had what experts refer to as lower heart rate variability — a characteristic that can contribute to an elevated risk for cardiovascular disease.

Other studies have found effects on the cardiovascular system, too. In one, published in 2012, researchers measured the heart rates of 78 bereaved people twice — once for 24 hours within the first two weeks of a spouse or child’s death, and again for the same amount of time six months later. They found that their heart rates were initially faster, then returned to normal, suggesting that the bereaved may have been at least temporarily at higher risk for heart disease. Another study published in 2012 found that those with higher scores on grief assessment tests also had increased levels of cardiovascular clotting factors, possibly raising the risk of developing blood clots.

And in one review of 20 studies, published in 2020, people who scored higher on psychological measures of grief also had higher levels of certain stress hormones like cortisol and epinephrine. Over time, chronic stress can increase the risk of cardiovascular conditions as well as diabetes, cancer, autoimmune conditions and depression and anxiety.

Put the studies together and on the whole, Dr. Fagundes said, “everything starts with the brain.” It responds to the death (and to intense stress in general), by releasing certain hormones that fan out into the body, affecting the cardiovascular system and the cells of the immune system. Aside from that generality, however, the biology of grief has no clear chain of cause-and-effect that the biology of, say, diabetes, has. That’s because the goals of these studies are to better understand the griever’s risks for disease, not to understand the path of grief through the body.

The one exception is with the study of the brain. In 2001, Dr. O’Connor first began imaging the grieving brain, and a handful of similar studies have been done since. In these studies, a person lies immobile in a functional magnetic resonance imaging (or fMRI) scanner, looks at certain pictures and listens to certain words, and the machine maps the blood flow to parts of the brain. In one study published in 2003, Dr. O’Connor found three areas of the brain that were triggered by words related to grief (like “funeral” or “loss”) and a fourth triggered by pictures of the person who died. Some of the brain areas were involved in the experience of pain, others in having autobiographical memories. These findings were “not world-stopping,” Dr. O’Connor said, “like, sure, that’s what happens in grief.”

But the responses recorded in another area, called the nucleus accumbens, were more surprising. This region is part of the brain’s network for reward, the part that responds to, say, chocolate, and it was active only in people with complicated grief. Nobody knows why this is so, but Dr. O’Connor theorized that in the continuing yearning of complicated grief, being reminded of a loved one with pictures and words might have the same reward as seeing a living loved one. In regular, uncomplicated grieving, the reminder is no longer connected to a living reward but is understood as a memory of someone no longer here.

All of these studies, however, have limitations. Many of them are small and haven’t been replicated. The researchers also don’t have the resources to follow the participants over time to see whether those with higher risks for a disease eventually develop that disease. Many studies are also a snapshot of one point in time, and will miss the changes that occur in most people over months and years. Studies using fMRI have limits all their own, too: “A lot of things could make the same areas light up,” Dr. O’Connor said, “and the same thing might not make the same areas light up in everyone or in one person over time.”

Grief, biological and psychological, is of course the result of another hard-to-study state, human attachment or love. “Humans are predisposed to form loving bonds,” Dr. O’Connor said, “and as soon as you do, your body is loaded and cocked for what happens when that person is gone. So all systems that functioned well now must accommodate the person’s absence.” For most people, the systems adjust: “Our bodies are amazingly resilient,” she said.

In a recent issue of the research digest UpToDate, medical doctors outlined the most current scientific studies on bereavement. One way to think about grieving, they said, is that the feeling of connection to the person who died “gradually moves from preoccupying the mind to residing comfortably in the heart.” I’m unsure about that word, “comfortably,” but yes, I’m no longer preoccupied. Now, 34 years after my son’s death, I’m back in charge, and if pain never quite goes away, then neither does love.

Ann Finkbeiner is a freelance science writer who usually writes about astronomy and the science of national security. She lives in Baltimore.