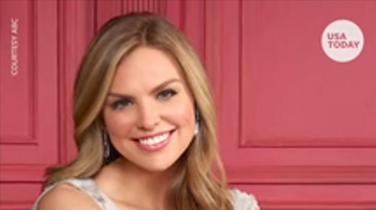 This week’s episode of “The Bachelorette” brings us back to Riga, Latvia — and back to the same tired Luke drama.

Garrett snags the first one-on-one date card: “Can I trust our love?” Luke obviously grows jealous — “I know for a fact no guy here feels about Hannah the way I do,” he says in a voiceover — but he has no idea what kind of literal leap Hannah and Garrett’s relationship is going to take.

The date is bungee-jumping … but with a twist. Apparently, it’s a Latvian tradition for couples to bungee jump naked, as Hannah and Garrett discover after watching one of these couples jump from a cable car above their heads.

The pair undress and prepare for the freezing plunge. Both freak out but ultimately go through with it. “No fear,” they say to each other before the jump, and they kiss. Adventurous contestant Tayshia from Colton’s season is probably fuming somewhere right now. They celebrate afterward by the fire in their bathrobes, and Garrett tells Hannah that her crying in Scotland tugged at his heart and taught him a lesson about focusing on their relationship. We love it if it’s true!

Later at dinner, Hannah opens up to him and tells him what’s helped mold her is living life for herself and not letting others control her. Garrett shows his vulnerability when he talks about how he was born and bred for football and realized he hated it. That led him to play golf. (He’s a professional.) We really missed healthy conversation, so this was a breath of fresh Latvian air — save for all the cheesy metaphors about leaps of faith, falling in love, etc.

In case you hadn’t figured it out: She gives him a rose. They dance and kiss on the street while a cello player serenades them. It’s almost as romantic as when Connor left Hannah adorable sticky notes. Almost.

Garrett recaps the date for the group, and Luke doesn’t believe they actually went naked bungee jumping. “Who would wanna be naked with that guy?” he says in an aside. This is going to be awkward.

This week's episode of "The Bachelorette" brings us back to Riga, Latvia — and back to the same tired Luke drama. Take a deep breath, Bachelor Nation. (Photo: USA TODAY)

Last week’s drama: Hannah snaps at men, declares ‘I don’t want to do this’

A great group date … until Luke opens his mouth

The day includes moonshine shots and arm wrestling, plus Tyler brings Hannah flowers and Jed steals a kiss in an effort to stand out from the rest. Everyone is getting along and it’s great. But then Hannah starts telling the guys about her date with Garrett.

Luke thinks what she did crossed a line. “Her body is her temple and to expose it to anyone who isn’t her husband … that was a slap in my face,” he says in an aside. He discusses his feelings with some of the group later, though we don’t learn of others harboring the same concern.

Later, Tyler says in a voiceover that he feels like he’s falling in love with Hannah. He tells her that he adores the fighter in her. Don’t count out Tyler in this competition, folks.

Luke explains to Hannah that he feels like he’s been cheated on, and refers to her body as a temple, saying the bungee jumping “really pissed me off.” It’s taking a lot of effort to sit through these scenes and not throw something. Hannah tries to explain to him that yes, she had a choice, and that the jump wasn’t sexual but an experience she wanted for herself.

He says that no matter what she does he’s going to support her, even if she makes a “boneheaded mistake.” And wants her to know that at the end of the day they’ll get through anything. The conversation may have stopped there, but it’s far from over.

‘Bachelorette’ host Chris Harrison: ‘We can’t get traction this season’

It’s shocking Hannah and Peter haven’t had a one-on-one date yet, considering how much it seems they’ve already gotten to know each other. The two enjoy a Latvian spa day, obviously involving a heavy make-out session. This is “The Bachelorette” after all!

Peter, like Garrett, brings up how seeing her upset in Scotland affected him. She wants to know more about him and he wants to know everything about her. Yes! More healthy talk!

Later, he asks where her confidence comes from and Hannah says she’s the most introverted person in her family, which, wow.

He says he draws his strength from being a pilot, and that you can’t fail because you have lives in your hands every flight. She questions how his career has affected his dating life. He starts talking about a relationship, saying it wasn’t meant to be and that it’s been difficult for him to take down guards around his heart.

But here we go: Peter says he’s never felt so strongly for someone so quickly. He also speaks beautiful Spanish, sharing a saying his grandmother told his mother and she passed down to him. Part of it, in English: “What’s for you and what’s meant for you will never be tarnished and will always be yours.” Again: It’s almost as romantic as when Connor left Hannah adorable sticky notes. Almost.

He tells her he wants to know every bit of her heart. “Same,” Hannah replies. Has anyone counted how many times she’s said that this season?

Peter, too, gets a one-on-one date rose. They watch fireworks together. There go the pesky metaphors, again!

Oy, but Luke: ‘Bachelorette’s Chris Harrison on why Hannah, Luke ‘just can’t get away from each other’

When Peter heads back and recaps the group date, it’s Jed’s turn to feel jealous. He goes to the street where Hannah is staying and starts playing his song from the Mr. Right pageant on his guitar. (Rom-com trope, anyone?) She invites him in and they hang out on her bed while he plays for her. He tells her that he is falling in love with her. This is ringing like a hollow guitar, though, given recent rumors about his love life prior to the show.

Elsewhere, Garrett confronts Luke about him bringing up the naked bungee-jumping with Hannah. “Sweet dreams, Luke,” Garrett tells him after the tense nighttime chat.

Hannah shows up to talk to Luke and explains how their previous conversation didn’t sit well with her, especially his talk of boneheaded mistakes and “slap in the face.” She explains that even if the bungee jump was sexual: “You’re not my husband. You don’t own my body. You don’t own me. It’s my body.” Boom, Hannah.

Luke says that he has full trust in her and that he started the conversation in the worst way possible and was speaking on assumptions. He says he’ll never control what she does and won’t tell her what she can and can’t do with her body. His attempts at clarification backfire: He says that he’s not questioning her character, but she points out that he called her disrespectful.

He tells the guys later to stay in their own lanes after more arguing breaks out. Now we have car metaphors to contend with, because this show can’t get enough metaphors.

But the fighting doesn’t last too long. Chris arrives and says they’re won’t be a cocktail party as they’re going straight to the rose ceremony.

Garrett, Peter and Tyler already have roses. The next ones go to Jed, Mike, Connor and … you guessed it, Luke, again, with Dustin and Dylan sent home.

“There’s goodness inside of you and I see that,” Hannah whispers to Luke.

The contestants are mad, and so are we.

Yes this happened: ‘Bachelorette’ villain Luke P. reflects on regrets and ‘flaws as a man’