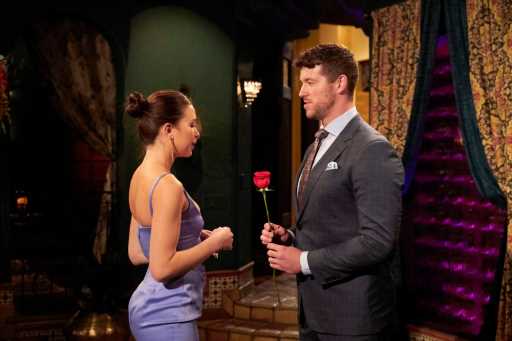 (If you haven’t seen the episode yet, stop reading now to prevent spoilers.)

Longtime fans of “The Bachelor” know there’s a formula at play near the end of the season. Following hometown dates when the single lead meets their remaining suitors’ families, it’s time for the highly anticipated Fantasy Suites dates, which allow couples a camera-free night of intimacy. After all, you need to test drive the car before you buy, right?

Denver’s Gabby Windey understands this well. She and the two other women left vying for bachelor Clayton Echard’s heart on the show’s 26th season flew to Reykjavik, Iceland on Tuesday night’s episode where producers forced the women to room together in a hotel and go on individual dates (with the possibility of staying overnight) with their communal boyfriend. Awkward.

“I don’t want you to not explore your options,” Windey told Echard during dinner after the couple spent the day riding a dune buggy across Iceland’s black sand beaches. “I want you to and because of that choose me.”

That landed her an invitation to the Fantasy Suite, in this case a romantic yurt with a hot tub, and the two fell asleep to the sound of the rain. In the morning, Echard brought Windey breakfast in bed and told the Denverite he was falling in love with her – reciprocating feelings she first expressed to him on her hometown date.

“Things with Gabby are easy and they make sense,” Echard said in a confessional interview. “There’s no fear, no pressure, no stress. It’s just about like seeing how we can grow.”

Windey went on the second of three dates after Rachel Recchia, a Floridian pilot with whom Echard also spent the night, and before Susie Evans, a wedding videographer from Virginia who’s been a frontrunner all season. Perhaps he should have reconsidered the order because this is where things get messy.

Echard took Evans on a date to one of Iceland’s geothermal spas and was clearly planning to invite her to stay the night. At dinner, he didn’t just tell Evans he was “falling” in love, but that he was “in love” with her. To which she responded – and I am paraphrasing here – “If you slept with those other women, I’m out.”

Echard admitted, yes, he not only slept with both women, but also told them he was falling in love. Adding, “but I love you the most.” The conversation spiraled into a full-blown argument and Twitter dragged Echard for his heated response.

Evans ended up leaving the show and so by default, our local gal is now in the top two. Will she get engaged to Echard after hearing about what happened? It’s all TBD given this week’s episode ended without a rose ceremony, though comments from Monday night’s “Women Tell All” suggest Echard may end up single.

Tune into the drama next week with two nights of “The Bachelor,” including what’s poised to be juicy live interviews, on Monday and Tuesday.