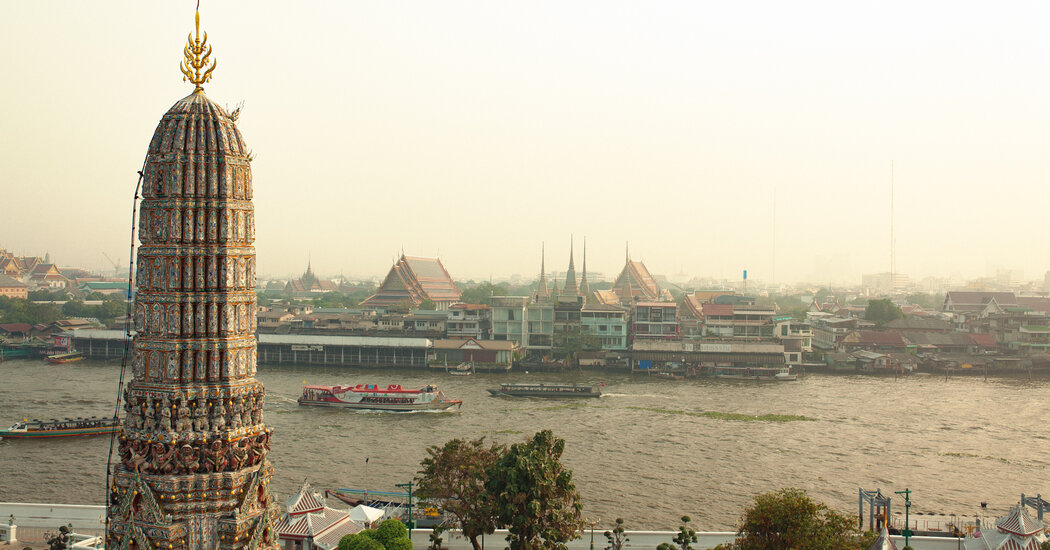 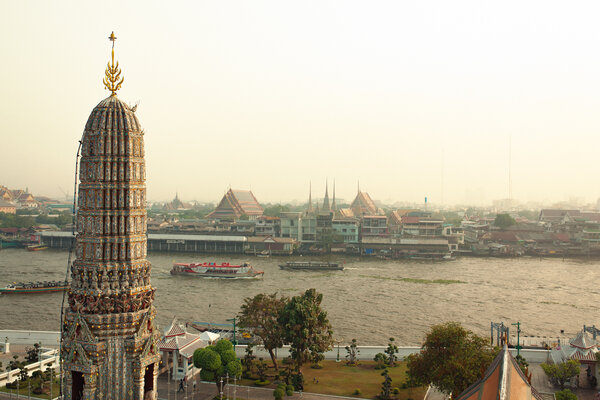 Welcome to T Wanderlust, a new travel newsletter from the editors of T Magazine. Twice a month, we’ll recommend global destinations and hotels worth visiting. Sign up here to find us in your inbox every other Friday, along with our T List newsletter each Wednesday. And you can always reach us at [email protected].

Curving along the eastern bank of Bangkok’s Chao Phraya River, from the temple-studded Rattanakosin district to the southern end of suburban Bang Kho Laem, Charoen Krung Road has experienced a creative renaissance in recent years. While the pandemic largely stalled developments in the Thai capital’s long-established cultural hubs of Sukhumvit and Sathorn, forward-thinking Thais fixed their sights on the city’s oldest paved road (finished in 1864) and recast it as a homegrown cultural destination.

When the design library and exhibition space Thailand Creative & Design Center moved into the Art Deco-styled Grand Postal Building in 2017, an influx of Thai chefs, designers and curators started taking over the often-dilapidated shophouses that lined the alleys and subdistricts branching off Charoen Krung. Some were revamped into contemporary art centers such as Charoen 43 Art & Eatery or trailblazing restaurants reinterpreting Thai cooking (the new Small Dinner Club by the former monk Sareen Rojanamatin and drinking-food-centric Samlor among them), while many others drew inspiration from the Thai-Chinese kitchens, local craftspeople and neo-Classical architecture that have defined the area since the mid-19th century. The opening of two MRT subway stations on Charoen Krung in 2019 has only added to its accessibility.

“Young Thais have an increased interest in old buildings and historic architecture,” says the florist Chitchanan Sukpong, 27, who opened her wood-veneered flower boutique and wine bar Mala on Charoen Krung Soi 43 last March. “These buildings have a unique character that’s impossible to recreate.”

Despite Charoen Krung Road’s rapid gentrification, a trip down this storied four-mile artery — which snakes through historic Chinatown, multiethnic Bang Rak and the delightfully walkable Talad Noi area — can still feel like a stroll through the Bangkok of the past. Here, far away from the gleaming skyscrapers, you’ll find pushcarts hawking khanom (traditional Thai sweets made from coconut and rice flour) and century-old Chinese shrines swirled in sweet-smelling incense. Mom-and-pop restaurants serve the same noodle recipes their owners’ ancestors cooked decades ago and, unlike in most of Bangkok’s high-octane downtown area, you can find yourself lost in whisper-quiet alleys where street cats are your only companions. “This part of town isn’t too crowded,” Sukpong says. “When I’m here, it doesn’t feel like I’m in the city.”

When Capella’s first Thai outpost opened on the southern half of Charoen Krung Road at the end of 2020, it raised the bar for luxury stays in a city that isn’t short on great hotel options. This riverside retreat brought in perks Bangkok hadn’t yet seen: roomy villas — all marble and chrome — pitched right along the water with their pools and tropical gardens; suites with Jacuzzi-equipped balconies; and floor-to-ceiling river views from every room, lobby nook and restaurant. The food options include Phra Nakhon, an all-day Thai diner with a tree-shaded terrace and greenhouse-like salon, and Côte, a coastal Mediterranean fine dining spot opened by the Italian Argentine chef Mauro Colagreco. Guest-experience managers, called “Capella Culturists,” can set up anything from guided meditation sessions with a local monk to chef-led tasting tours through the neighborhood’s best street-food kitchens. capellahotels.com

This courtly neo-Classical edifice, located near where Charoen Krung bends into Chinatown, has lived many lives. It began as a Chinese medicine clinic in 1917, then converted into a bank and, finally, a seedy massage parlor. Ananda Chalardcharoen, a renowned stylist in Thailand’s fashion circles, took it over in 2019 and transformed the space into a 10-room boutique hotel. She stripped away the modifications made over previous decades and reopened blocked windows, revealed original wooden floors and even found the building’s glass-domed skylight, which had been hidden behind a cracked ceiling board. She infused the space with a mix of marble, antiques and taxidermy and outfitted most rooms with roll-top bathtubs and velvet-clad sofas. The cafe downstairs is a popular spot for brunch and afternoon tea. facebook.com/themustangblu

The multihyphenate Thai designer Saran Yen Panya describes his tea parlor as “a mixture of a thrift shop, your grandma’s house and an LSD experience.” It’s an apt summary: Behind a bright orange facade deep inside Talad Noi’s warren of alleys, the store unfurls like a rabbit hole of Chinatown kitsch. Panya furnished it with his collection of retro light fixtures and noodle stools upholstered with woven reed and embroidery, which are displayed between walls covered in bold illustrations of tigers, Chinese tea tins and framed cross-stitches of vintage pinups. The drink list pays homage to the flavors of this age-old district, with four types of frothy Thai milk tea and pots of artisanal tea blends inspired by sweet bua loi dumplings (with hints of mango and ginger) or star anise- and licorice-tinged duck noodles. The space doubles as a concept shop, selling glassware and bamboo serving trays inspired by Southeast Asia’s disappearing kopi (traditional coffee shop) culture, alongside the shirts, bags and homewares Panya produced in collaboration with craftspeople around the country. citizenofnowhere.info

In a narrow Chinatown lane, a former Chinese herbal medicine dispensary is the surprising setting of one of Bangkok’s most sought-after reservations. The chef Pichaya Utharntharm, a fourth-generation member of the family that opened the business in 1910, has transformed the crumbling five-story building into a Thai-Chinese fine diner where she serves 20-course tasting menus inspired by her childhood spent in the neighborhood. Dishes change with the seasons and could include intricately plated riffs on Chinatown staples such as roasted duck (Utharntharm’s version is dry-aged in hay and served with housemade condiments on a revolving tray) or mooncakes with fish floss. On the fourth floor, formerly the family’s opium den, the aptly named Opium Bar specializes in experimental drinks with ingredients including corn husk syrup, miso and chamomile cordial, served à la carte or paired with small bites as part of a tasting experience. restaurantpotong.com

As one of the last remaining Hokkien-style mansions in the city, this roughly 230-year-old courtyard home in the heart of Talad Noi offers an enchanting window into the Charoen Krung district of centuries ago. While the building has been updated over the years, many of the original teakwood carvings, ornamental doorways and age-old family heirlooms, including stately ancestral portraits and timeworn Chinese chairs, are still on display. But a house this old doesn’t come without challenges. Because it’s a private property — three families still live here — the owners can’t apply for government support, and in a city often indifferent about its architectural heritage, there are few funds available to help address conservation issues such as deteriorating floorboards and leaking roofs. One of the co-owners, Poosak Posayachinda, a dive instructor and eighth-generation descendant of the Chinese edible bird’s nest merchant who built the house during the reign of King Rama I, installed a 13-foot-deep professional diving pool in the courtyard to generate income for the ever-increasing maintenance bills; he also sells coffee and Thai tea to curious visitors, who can tour the property with Posayachinda when he’s home (or alone when he’s not). “Investors have offered lots of money for the house, but we won’t sell it at any price,” he says. “We want to keep it to show visitors the real Chinese way of life.” +66 80 218 7000

Thailand’s Central Group, a global conglomerate with a portfolio of hotels, restaurants and department stores that includes KaDeWe in Berlin and Selfridges in London, started its billion-dollar empire in 1950 with a humble corner store on Charoen Krung Road. The space, a typical Thai-Chinese shophouse, fell into disrepair over time, until Barom Bhicharnchitr, the great-grandson of Central Group’s founder, spearheaded a modern-day revival in 2020. Together with the Belgian architect Vincent Van Duysen, he conceived a terrazzo-floored and Thai terra-cotta-tiled lifestyle hub with an all-day cafe, a neon-lit vinyl listening bar and a rooftop restaurant by the Australian chef David Thompson. The ground-floor concept shop sells rare collectible magazines (think 1960s Esquire prints and a 1948 Collier’s in mint condition) as a nod to The Original Store’s position as the area’s most popular English-language newsstand. Upstairs, the gallery spaces run exhibitions of everything from Thai street art to prints and fashion inspired by Tom of Finland. centraltheoriginalstore.com

What to bring home, as suggested by locals we like

“The handmade pillows by Heng Seng, the only prayer-cushion maker left in Talad Noi, remind me of my Thai-Chinese heritage,” says Pichaya Petrachaianan, the healer and fortune teller behind the alternative wellness collective and studio Placebo Club. “Run by a family for more than 100 years, Heng Seng recently started making more contemporary designs. In addition to the cushions made for kneeling, they now make neck pillows and stool covers with vintage-inspired peony prints.” From around $50; facebook.com/HengsengTaladnoi.

“I always receive compliments when I wear my necklace or earrings from Eastern Antiques, a 40-year-old shop on Charoen Krung Road,” says Mook Attakanwong, a co-owner and curator of contemporary art space ATT 19. “They’re made from sterling silver and shards of broken ceramics from China and Thailand — unique pieces of jewelry and antique keepsakes in one.” From around $11 for rings; +66 65 441 4953.