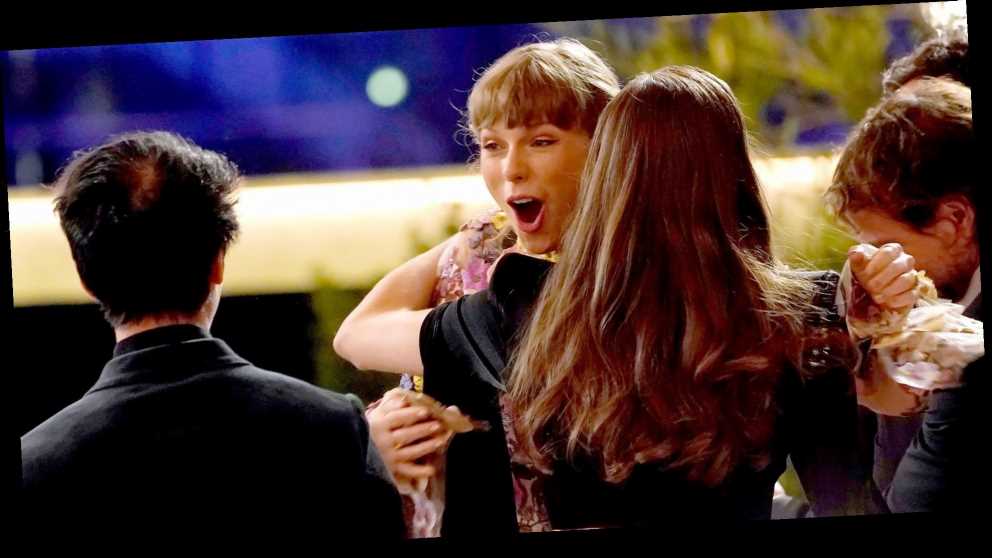 Still in shock! With more than one hundred award nominations throughout her impressive career, you’d think Taylor Swift wouldn’t be all that surprised to receive another trophy.

The country-turned-pop star won her first Grammy Award in 2009, scoring the prestigious Album of the Year win for her second studio record, Fearless. The wins kept coming that night as she took home Best Female Country Vocal Performance, Best Country Song and Best Country Album. As she climbed onstage to accept the honors, Swift clasped her hand over her mouth in utter disbelief.

As her winning streaks continued over the years, the Pennsylvania native’s candid expressions that accompanied each major award she received became notorious, meme-worthy moments. For her second Album of the Year win at the 2016 Grammys, Swift made a powerful statement about unabashedly celebrating her accomplishments in the face of criticism.

“As the first woman to win Album of the Year at the Grammys twice, I want to say to all the young women out there, there are going to be people along the way who will try to undercut your success or take credit for your accomplishments or your fame,” the “Look What You Made Me Do” singer said at the time. “But if you just focus on the work and you don’t let those people sidetrack you, someday when you get where you’re going, you’ll look around and you will know that it was you and the people who love you who put you there. And that will be the greatest feeling in the world.”

In March 2021, Swift became the first woman to have three Album of the Year wins, winning the Grammy for her eighth studio album, Folklore. Not only has the Miss Americana star made Grammys history, but she’s also earned 23 Billboard Music Awards, 12 Country Music Association Awards, eight Academy of Country Music Awards and a Brit Award.

The Cats actress also holds the record for most American Music Award wins by any musician with 32 trophies. While accepting the Artist of the Decade award at the 2019 AMAs, Swift shared the special moment with the fans who’ve stayed by her side through it all.

“The fact that this is an award that celebrates a decade of hard work and of art and of fun and memories, all that matters to me is the memories that I have had with you guys, with you the fans, over the years,” she said at the time. “Guys, we’ve had fun, incredible, exhilarating, extraordinary times together, and may it continue. Thank you for being the reason why I am on this stage, from the very first day of my career until tonight.”

Scroll down to see all of Swift’s most outrageous surprised faces through the years!