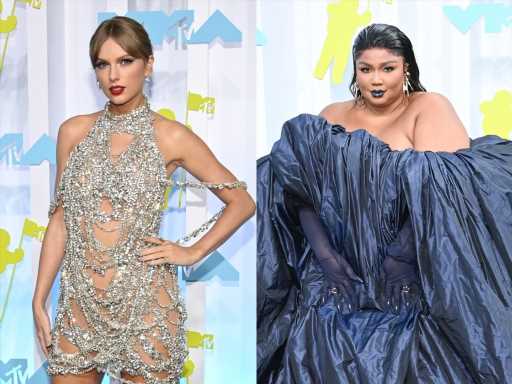 While crazy things happen at A-list award shows all the time, there was something magical about the 2022 MTV Video Music Awards. Held at Prudential Center on August 28, 2022, in Newark, New Jersey, the MTV VMAs had twists and turns at every corner.

Not only did Taylor Swift make a surprise appearance, but she set two new records. She became the only artist ever to win three VMAs for video of the year and the first artist to win for a video they directed. Along with Swift, Anitta made history by becoming the first-ever Brazilian artist to take home an MTV Video Music Award. Harry Styles won album of the year for Harry’s House, Dove Cameron won Best New Artist, and stars like Lizzo, Lil Nas X, and Billie Eilish won big as well!

While everyone’s been buzzing about the awards ceremony, everyone on Twitter can’t stop talking about the insanely dramatic red carpet fashion. From Lil Nas X’s show-stopping headdress to the stunning, sleek black ensembles, the red carpet was a sight to see. And honestly, we can’t stop thinking about Ashley Graham’s cutout gown.

See our favorite looks from the 2022 MTV Video Music Awards red carpet below!