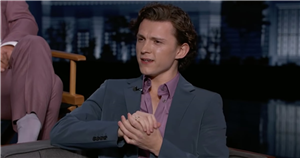 Tom Holland is so ready for Spider-Man: No Way Home to be out already. Yes, because it marks the highly anticipated conclusion of a successful trilogy that also introduced him to his (rumored) girlfriend, but also because he appears to be very tired of dodging questions about the same rumors, mainly the one about Tobey Maguire and Andrew Garfield appearing in this installment for a Peter Parker extravaganza. When pressed most recently on Jimmy Kimmel Live!, Holland simply said, “Who are they?”

In a noble attempt to redirect, Holland said he actually has met Maguire and Garfield and recently bumped into them at separate parties on the same night. (“Parties” — is that what they call film sets these days?) “I keep bumping into them! I went to one party in Hollywood, I bumped into Andrew, had a lovely time. I went to another party down the street, and I bumped into Tobey,” Holland said. “It was crazy! We should’ve filmed it, and then we could’ve snuck it in.”