On Monday night, Stephen Colbert chastised the city’s mayor, Dan Gelber, for saying those partyers were not “following the rules.” “Yes, he wants a spring break that’s not chaotic or disorderly, like in those famous videos, ‘Girls Gone Mild,’” Colbert said.

“Things got so out of hand that on Saturday, the city was forced to declare a state of emergency and an 8 p.m. curfew. And, surprise, it didn’t work. Hot tip for Miami authorities: If you want young people to stop partying, don’t instate a curfew, just invite a few dads.” — STEPHEN COLBERT

“Yup, now there’s a curfew from 8 p.m. to 6 a.m. so spring breakers will have to return to their motel rooms. The best way to guard against Covid is forcing drunks into small, confined spaces, that’s what I’ve always heard.” — JIMMY FALLON

“You know things are out of control when Florida is worried about Covid.” — JIMMY FALLON

“College kids were like, ‘It’s a shame, ’cause I flew to Miami during a pandemic to party very responsibly.’” — JIMMY FALLON

“[imitating partyer] Wooo! I’m with you, my fellow younglings. The virus can’t catch us if we don’t stop dancing! I’m never going to die!” — STEPHEN COLBERT

“This is what’s going to happen after Florida’s governor called the state a ‘freedom oasis.’ Like if I put a Starbucks sign above my apartment door, I can’t be mad when people show up and try to take a [expletive] in my bathroom.” — TREVOR NOAH

“But still, there’s no reason that you can’t celebrate spring break and wear a mask. It could be part of the fun. I mean, just think how sexy a wet mask contest could be, hmm? I mean, we haven’t seen mouths in a year — what’s under there?” — TREVOR NOAH

“And if we learned anything from Miami, this is just a preview of how much everyone is going to get loose once the pandemic is truly over. People have been locked up for too long. Once it ends, everyone’s going to be drinking and partying, hooking up with everyone. It’s going to be so much that it’s going to create the next worldwide virus. Yeah, guys are going to be waking up in bed next to a bat like, ‘Uh-oh, I think I did it again.’” — TREVOR NOAH

“Our new president is on a roll, baby. Nothing can stop him now — except stairs.” — STEPHEN COLBERT

“He’s facing a lot of challenges in his first 100 days — the vaccine rollout, the crisis at the border, and what happened to Ms. Frizzle. Whew. But over the weekend, he faced his biggest challenge yet: staying upright.” — TREVOR NOAH

“I’m sorry, guys, I honestly can’t believe that this happened. The president got knocked over by wind. This is going to be the first president where the Secret Service needs to carry around paperweights: ‘Hold on, sir, hold on. We got you, we got you — someone sneezed.'“ — TREVOR NOAH

“It’s not like this just happened to Joe Biden, all right? It happens all the time. Biden tripped, Obama tripped, Mike Pence tripped. And the reason isn’t because they’re old — the reason is because they were running up and down stairs. You shouldn’t do that.” — TREVOR NOAH

“That would never happen in Africa. I mean, mostly because our presidents fly commercial and they have to wait for their boarding group to be called, but you get what I mean.” — TREVOR NOAH

“The point is we don’t think about it because we use stairs so much, all right? Nobody thinks about it, but stairs are basically an obstacle course. You take one wrong step and you’re going to eat [expletive]. And that’s one thing — one thing that my man Trump understood. You love him or hate him, but you’ve got to treat stairs with respect. He understood that. You walk up slowly, you hold the banister and you swear to God that if he lets you survive this, you will never walk up stairs ever again.” — TREVOR NOAH

“It’s interesting — I feel like they’re the opposite with stairs and Covid. Like with Covid, Trump took no precautions; Biden took every precaution. But on stairs or ramps, Trump’s super careful, always holding the railing, going real slow. Whereas Biden throws caution to the wind, trips upstairs three times. So it’s interesting, you know? It just shows we all contain multitudes.” — SETH MEYERS

What We’re Excited About on Tuesday Night

Megan Mullally and Nick Offerman will catch up with Seth Meyers on Tuesday’s “Late Night.” 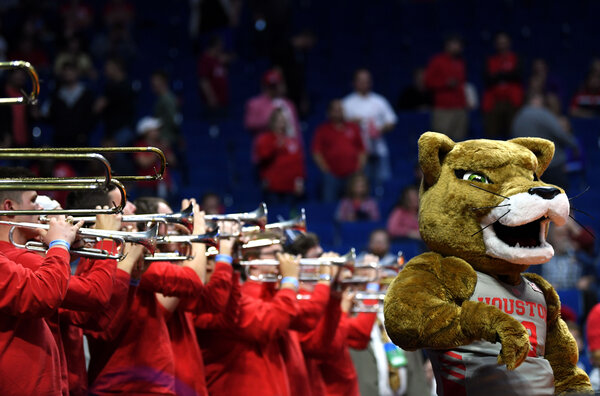 One noticeable difference for March Madness this year: no live bands.