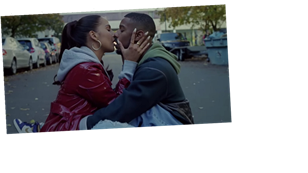 Are Snoh Aalegra and Michael B. Jordan dating? That’s the question that everyone seems to be asking after the 32-year-old Swedish R&B soul singer dropped the video for “Whoa” on Friday. The track is featured on her sophomore album – Ugh, those feels again, and the accompanying video paints a very romantic picture of the two as they share a kiss in the middle of the street and slow dance together. While neither Jordan nor Aalegra have publicly commented on the status of their relationship, it’s hard to deny their chemistry in the video.

Over the years, Jordan has been linked to a handful of famous women, including his Black Panther costar Lupita Nyong’o. However, Jordan previously told WSJ Magazine that “LA isn’t the best place to date.” Perhaps he’s changed his mind? Watch the dreamy video above, and then decide for yourself.