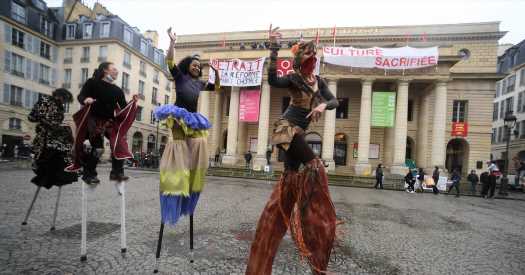 The only march you’re likely to see on Broadway this year is the kind with trombones in “The Music Man.”

And if you ever hear people say the Majestic Theater has been forcibly occupied, you can be pretty sure they’re referring to “The Phantom of the Opera.”

Which is why the news last week that thousands of protesters were marching in France to demand the reopening of theaters there seemed so difficult to comprehend here. Our theaters draw thousands outside only if they are lining up to see the Rockettes inside.

Nor were the French merely marching. Dozens of protesters also forced their way into playhouses across the country — including three, in Paris and Strasbourg, designated as national theaters — to demand that cultural institutions, shut down since October, be treated like other businesses, some of which have been allowed to reopen.

Also on their agenda: an extension of tax breaks for freelance arts workers, or “travailleurs d’art.”

That the phrase “arts workers” (let alone “national theaters”) barely registers in American English is part of a bigger problem here — and suggests a bigger opportunity.

The pandemic has been a disaster for the theater, of course, potentially more damaging to performing arts industries than to any other. And yet, in the long run, if there is a long run, how we repair our stages could also lead to long-needed changes that would elevate the people who work on, under and behind them.

Not that those workers are likely to endorse the immediate reopening the French are seeking; by a strange quirk of political culture, the push for a return to normalcy at all costs that is a calling card of our right wing seems to be a progressive position there. The protesters — mostly students and actors and other theater workers — frame art-making as a matter of both liberty and labor. They see themselves as frontline workers; one of the signs they carried read: “Opening essential.” 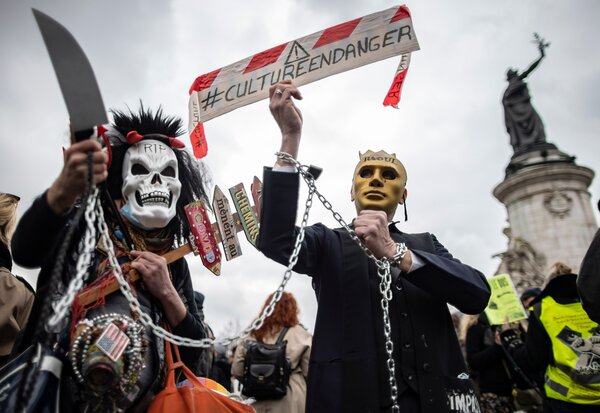 Here, the unions representing actors and other theater workers make the opposite argument: They worry that a too-swift reopening for the sake of the economy would expose their members to unacceptable risk. Singing, trumpeting and spitting while speechifying are occupational hazards most other professions don’t face.

Which is why, even in states like Texas and Montana that have ended mask mandates and declared themselves open for business without restriction, theaters aren’t on board. The Alley Theater, in Houston, has canceled its March performances of “1984”; the season at Montana Repertory Theater in Missoula remains a remote one regardless of state rules.

But if the specific motivation for the French protests seems unpopular here, the underlying assumptions about art are ones Americans should heed. Begin with how we look at our theater, and how it looks at itself.

Even when producing work that becomes a part of the national conversation — “Hamilton,” “Slave Play,” the Public Theater’s Trumpalike “Julius Caesar” in 2017 — our musicals and dramas are too often seen as inconsequential entertainment. The frequent abuse of the phrase “political theater” to describe cheap and manipulative appeals to sentiment tells you in what regard our theater is reflexively held.

There is no tradition in the United States, as there is in France, of treating artists as skilled laborers, deserving of the same respect and protections provided to those who work in other fields. It doesn’t help that American unions are so weak compared to those in France, where nearly all workers are covered by collective bargaining contracts. The comparable figure here has hovered around 12 percent for years.

Behind the statistics is an abiding strain of prejudice, dating back to the Puritan settlement, that sees cultural work, especially stage acting, as a species of child’s play or worse. In “An Essay on the Stage,” Timothy Dwight IV, a Yale president in the early 19th century, wrote that those who indulge in playgoing risk “the loss of the most valuable treasure, the immortal soul.”

Both attitudes are very nearly backward, but that doesn’t mean they’re not widely maintained even today. Indeed, they are enshrined in the stinginess of American governmental support for the arts, which remains a pittance. Cultural spending per capita in France is about 10 times that in the United States.

Which is one reason there are six national theaters in France, not just the three occupied last week. More than 50 other cultural spaces around the country, including the Opera House in Lyon, which students entered on Monday, have now been occupied as well, the protesters say. To occupy a building (while permitting rehearsals within it to continue) may be a misdemeanor, but it is also a sign of love and ownership.

It’s hard to imagine such an occupation in the United States; for one thing, there is no national theater. And who would play the role of the actress at the French film industry’s César awards ceremony this weekend who protested her government’s lack of support by stripping off a strange costume — was it a bloody donkey? — to reveal the words “No culture, no future” scrawled across her naked torso?

But ours is a country that treasures its cultural heritage without wanting to support the labor that maintains it.

Perhaps that’s changing, if less dramatically than in France. Though the pandemic has left many theater artists without work — and, often, without the health insurance that comes with it — the relief bill President Biden signed last week will make it cheaper for them to obtain coverage elsewhere. The bill also includes $470 million in emergency support for arts and cultural institutions.

Organizations like Be an #ArtsHero are working to expand that relief even further. And hundreds of theater makers have used their talents to raise millions for organizations, like the Actors Fund, that are helping their colleagues survive the pandemic.

But arts workers shouldn’t be remembered just in emergencies and just as charity. Nor should they be remembered solely for their economic impact. It is often argued that Broadway alone contributes $14.7 billion to New York City’s economy, as if that were the point when it is really just the bonus.

What the French protests challenge us to consider is that the arts are neither an indulgence nor a distraction; they are fundamental not just to the economy but also to the moral health of a country. They are worth marching for.

Surely our theater artists, those highly skilled laborers, can figure out, if anyone can, how to demonstrate that idea — if necessary, in front of the Majestic Theater, with trombones and Rockettes in tow.