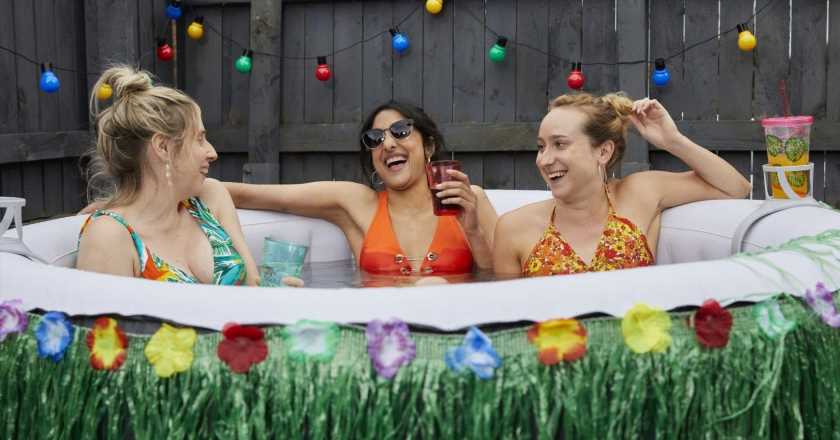 When you want to get lost in a new show but don’t have time for six seasons, it’s time for a limited series – read on for our pick of the best new ones that we recommend.

All because the sun is now shining a little more and we’re in the swing of festivals, dresses and outdoor living, it doesn’t mean that our penchant for a good TV series has disappeared. In fact, with the dawn of the next few months ahead of us, it looks like platforms and broadcasters are dishing up new series left, right and centre.

But even so, is there any worse feeling than wanting to get stuck into a drama to be met with the fact that there are five (or more) seasons to get through? Of course, lengthy series have their time and place but when you want to get lost in a new, riveting watch without all the commitment, that’s where we thank the streaming gods for limited series.

A limited series is one where there are a predetermined number of episodes to a show, all part of a complete story arc and once it’s done, it’s done. So whether it’s only four episodes long or six, you’ll know that nothing’s left on too much of a cliffhanger as chances are, it’s only ever going to be one season long.

So whether you’re tuning into iPlayer, streaming service Now or Netflix, here are just some of the best new limited series to get stuck into.

If there’s one BBC drama that’s got everyone talking at the moment, it’s this one. Based on the real-life murders in a small mining town in Nottinghamshire, this drama hones in on the whydunnit aspect that we love in a crime drama. It’s got everything: history, “spy cops”, relevant political issues and a manhunt of epic proportions. Oh and a stellar cast of British acting talent – need we say more?

All six episodes of Sherwood are available to watch on BBC iPlayer.

Everything I Know About Love

The Dolly Alderton adaptation has been a long time coming and we sure are glad it’s arrived. If you’re looking for something appropriate to watch while you’re hungover, enjoying some deserved rest and relaxation or just want a Sex And The City-esque drama to sympathise with, this is the pick for you. Prepare for immense nostalgia, many “that happened to me” moments and some serious Kate Moss for Topshop fashion moments.

All seven episodes of Everything I Know About Love are available to watch on BBC iPlayer.

When it’s time to look for a limited series, documentaries (particularly, Netflix ones) are the way to go. They’re glossy, well-produced, incredibly informative and quite literally transport you into another world for a few hours.

The latest one to take the streaming platform by storm is undoubtedly Keep Sweet: Pray And Obey. It follows the abusive polygamous cult of the Fundamentalist Church of Jesus Christ of Latter-Day Saints (FLDS), a denomination of Mormonism.

The four-part docuseries explores the radical sect which was led by one of the most dangerous, under-the-radar cult leaders of modern times, Warren Jeffs. What unfolds throughout this series is shocking to say the least and explores everything from psychological and sexual abuse to manipulation and multiple marriages. A short but eye-opening series.

All four episodes of Keep Sweet: Pray And Obey are available to watch on Netflix.

If there’s any mention of a limited series, you just know a Harlan Coben and Netflix collaboration will scratch that itch. They’re always suspenseful, dramatic and because they’re often based on Coben’s own books, are contained blissfully (and excellently) in less than 10 episodes. As well as Stay Close, Safe and The Innocent – among others – his most recent offering is Hold Tight.

This Polish adaptation follows how life in a tight-knit, affluent Warsaw suburb slowly unravels when a young man goes missing soon after his friend dies. Like any good Coben series, there are secrets and lies that rise to the surface making this a short series full of twists and turns.

All six episodes of Hold Tight are available to watch on Netflix.

Eddie Marsan and Monica Dolan star as John and Anne Darwin in ITV’s The Thief, His Wife And The Canoe.

The Thief, His Wife And The Canoe

If true crime is your genre of choice, look no further than this intriguing – and somewhat ridiculous – ITV drama. It follows the story and real-life fraud case of Anne and John Darwin, the couple that deceived the world (and their family) into thinking that John was dead after a tragic canoeing accident in 20o2.

It’s almost too ludicrous to believe but the drama brings to life the story of how John lived just next door to his grieving family, how the pair attempted to move to Panama and how, eventually, their web of lies came undone. It’s hard not to feel a little empathetic for Anne (played by Monica Dolan) throughout the four episodes of the series, as she has to reckon with her narcissistic husband (played by Eddie Marsan).

All four episodes of The Thief, His Wife And The Canoe are available to watch on ITV Hub.

ITV’s The Thief, His Wife And The Canoe: if you’ve watched the series, you’ll love these other podcasts and shows that dig into the John Darwin case

We love a good old fashioned spy thriller and this recent reboot of the beloved 1965 Michael Caine film oozes glamour, tension and suspense. It follows the story of Harry Palmer (played by Peaky Blinders’ Joe Cole), a British sergeant with a criminal past who is given the chance to become a spy instead of facing prison time.

Harry’s the kind of smooth-talking protagonist you can’t help but be intrigued by and as we follow him on this mysterious kidnapping case, he’s met with a international world of deceit, brainwashing and even, some romance.

All six episodes of The Ipcress File are available to watch on ITV Hub.

Whenever we see James Nesbitt fronting a show, we know to expect one of two things: a forlorn, complicated detective figure with a chequered past or a crime drama that will keep us guessing long after watching. Well, in this new Channel 4 crime thriller, we get both.

In this drama, Nesbitt stars as veteran detective Danny Frater who turns up at a hospital mortuary for a routine ID check on a young woman’s body. But he gets a devastating shock when the corpse turns out to be his estranged daughter, Christina (Imogen King).

He begins a furious mission to discover the truth, retraces her last days and hours, and tries to figure out what really happened to his only child.

All eight episodes of Suspect are available to watch on All4 now.

Channel 4’s Suspect: viewers react to the gritty new series and hail it as a “bloody good” drama

If light-hearted comedies are more up your street, Channel 4’s most recent offering is just the one for you. Focusing on a group of Hull-based women, the female-led comedy gives us everything we could want from a series and more: laughs, relatability and, like the synopsis says, “a lot of mucking about”.

We follow Toni (Leah Brotherhead), Rana (Taj Atwal) and Paula (Sinead Matthews) as they navigate life, relationships and their friendship in Kingston Upon Hull, England.

All six episodes of Hullraisers are available to watch on All4 now.

We Own This City

Often, American-based crime dramas can unfold over six, seven or eight seasons. Take Criminal Minds, Law & Order, The Wire, to name just a few. Well, this new limited series is just six episodes long and actually comes from the same creators of The Wire and The Deuce.

It’s also based on the true story of Baltimore’s well-known Gun Trace Task Force and the corruption that went on for years within it. The convictions and 2017 indictment are followed in this new series but with the help of the drama’s flashbacks and focus on Sergeant Wayne Jenkins (played by The Walking Dead’s Jon Bernthal), we can see just how sadly entrenched this kind of police corruption can be within American police forces.

All six episodes of We Own This City are available to watch on streaming service Now.

Have Now but don’t know what to watch? These are the 9 Stylist-approved shows to stream on the platform

Imagine waking up one day to discover you’re actually just reliving the exact same day from your past. Well that’s what happens when George (I May Destroy You’s Paapa Essiedu) starts to relive a day from months before.

Suddenly, all of his recent milestones – his career successes, his marriage to the love of his life, Sarah – are undone, a thing of the past. But the worst thing is, he’s the only one who notices what’s happening.

That’s all until he meets Archie, played by Vigil’s Anjli Mohindra. She soon recruits George for the Lazarus Project, which is “a secret organisation that has harnessed the ability to turn back time every time the world is at threat of extinction.” And now they have to work together with the rest of the team to stop a nuclear disaster that could destroy the world. It’s got high octane drama, action, time loops and more – and better yet, the series takes you through every emotion in just eight episodes.

All eight episodes of The Lazarus Project are available to watch on streaming service Now.