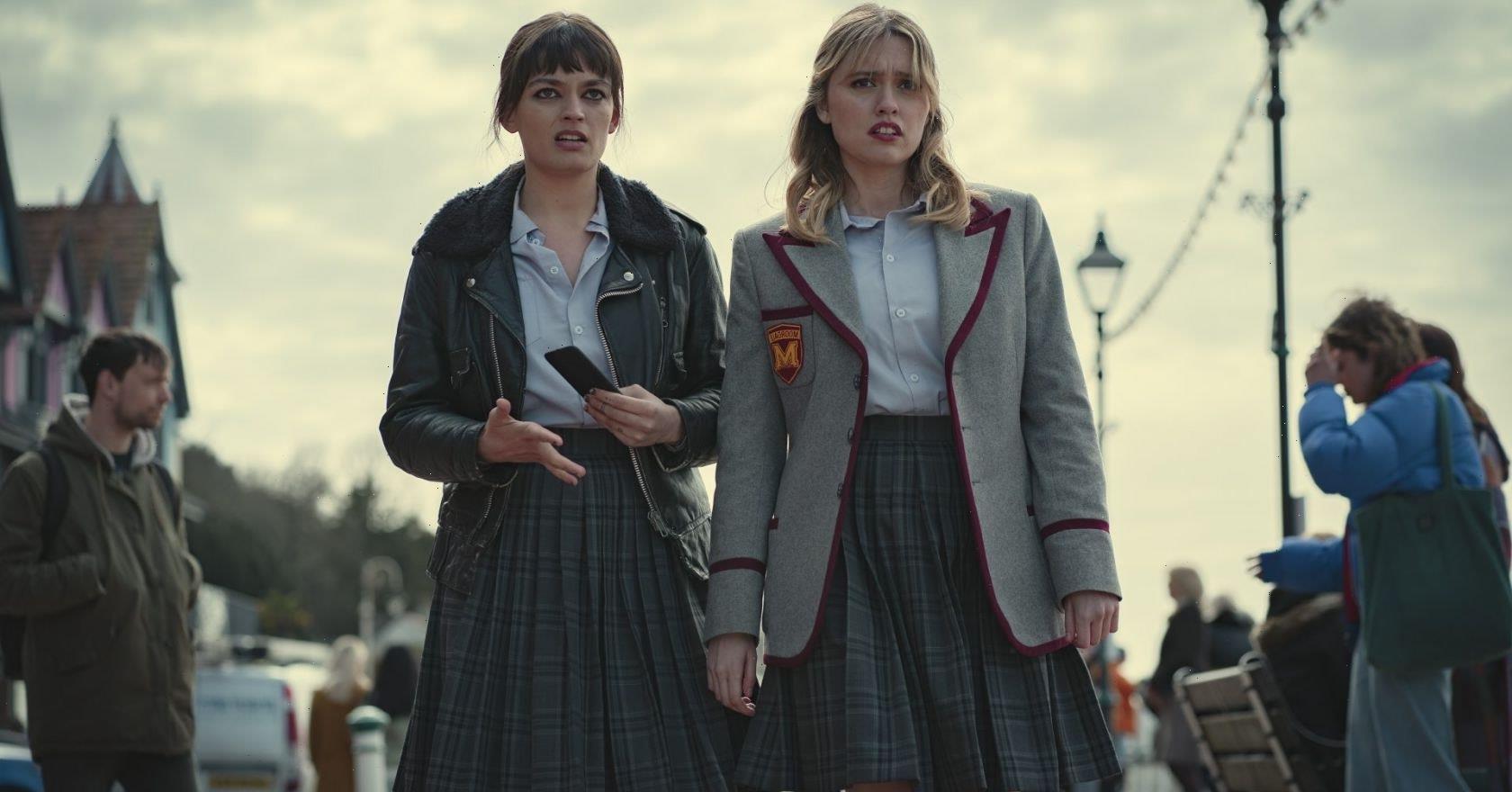 The series’ new characters lead the way in looking beyond patriarchal views of sex and gender, from geriatric pregnancy to fertility issues and the non-binary experience.

Warning: plotlines (but no major spoilers) from Sex Education season three are referenced in this review. Proceed with caution.

Stock up on your stationery, kids. Netflix’s Sex Education has returned and school is back in session.

So what were the Moordale kids’ summer assignments? We discover that Otis has been having casual sex with Ruby, briefly undergoing a suave makeover and a departure from that stripey jacket. Maeve explores her feelings for Isaac – never having heard the love declaration voicemail from Otis – while Eric and Adam are finding their feet as a couple.

There’s a lot going on with our old favourites. But what season three does really well is bring with it compelling new characters that pose new questions around sex, our bodies and how we view both, with a focus on the journey of non-male identifying students and grown-ups alike.

Girls star Jemima Kirke enters the fray as Hope, the incoming headmaster of Moordale Secondary (the departing head, Michael Groff, is hiding out waiting for his divorce to be finalised). Though she may appear closer to the gang’s age than Groff, her take on sex is just as archaic and perhaps more disturbing.

While she gives Otis and Maeve credit for their now-defunct sex education clinic, calling it “entrepreneurial”, she sets about obliterating numerous aspects of the sexually liberal utopia that the students have tried to build. The first port of call is destroying the old outside bathrooms where the clinic was conducted. Unfortunately, we discover that this also means the wiping out of a refuge for queer and trans kids who weren’t comfortable in changing rooms.

This is where we first meet Cal, an openly non-binary student at Moordale played by Sudanese-American recording artist Dua Saleh, who is hiding out in the outdoor lavatories. They soon cross paths with Hope as she goes about implementing new, rigid school uniform rules that don’t make room for gender fluidity, as well as sex education classes split into “male” and “female” sets that, respectively, encourage abstinence, and shame people with HIV/AIDS and those who become pregnant before marriage.

When Cal protests that their identity doesn’t fit with either new policies, Hope cruelly forces them to be “correct” and follow the rules and restrictions that the sex they were assigned at birth dictates.

This is a lot to take in. Especially on such a sexually liberal TV show, and in the same year that Russell T Davies’ It’s A Sin brought the 1980s HIV/AIDS crisis in the UK back into the public conversation. Not to mention the recent abortion restrictions in the US that threaten a woman’s right to exercise control over her own body.

But it does well to point out that not all young people are progressive – Kirke, and presumably her character, is in her 30s – and we have a long way to go when it comes to supporting all sexual orientations and gender identities, as well as the base human sexual impulse.

Kirke, who is also set to star in a TV adaptation of Sally Rooney’s much-loved novel Conversations With Friends, also said in an interview that Hope is “essential to telling the story of why abstinence is problematic”. But the nuance behind Hope’s actions also becomes clear quite slowly, which is just as interesting a story.

It is revealed she is facing her own battle with her body. Comments like “school is not a place for personal questions” and “a need to play nice is a female trait, and it holds us back” take on a new meaning when we get to know the character better. While it doesn’t exonerate her, it once again proves how much there is to be learnt about every person’s battle with their sexual and bodily demons.

Dua praised the Sex Education crew for making their experience so true to themselves.

“They really cared about authenticity and thoughtfulness and being able to showcase this phenomenal person in a way that isn’t necessarily harming anyone,” they told the Gay Times in an interview. We see them pursue a relationship with Jackson and teach a fellow student Layla (played by non-binary actor Robyn Holdaway) how to bind their body properly.

Elsewhere, Jean and Jakob are feeling their way through a “geriatric pregnancy”, a fraught relationship and an attempt at co-parenting their respective children, Otis and Ola. We are treated to various public slights at Jean’s ability to be a good “elderly parent”, as well her predictably brilliant clapback citing this experience as the “patriarchy in action, dissecting a woman’s choices in the cruellest manner”.

Though the show is primarily about teenagers discovering and owning their bodies and sex lives, Gillian Anderson delivers a masterclass in why women are still forced to submit to patriarchal views on their choices, whatever their age.

Though the show is primarily about teenagers discovering and owning their bodies and sex lives, Gillian Anderson delivers a masterclass in why women are still forced to submit to patriarchal views on their choices, whatever their age

Jean also agrees to carry out therapy sessions with Aimee (played by BAFTA-winning Aimee Lou Wood) as she continues to come to terms with her sexual assault in the show’s second season. Aimee is encouraged to reclaim her body and sexuality and becomes, according to Wood, a “feminist icon” after Jean recommends some reading to better understand her body and, specifically, her vagina. She starts baking and handing out vulva cupcakes at school, each one depicting a different shaped vulva, after deciding that her own is “definitely a geranium”.

Aimee also tackles her issues with people pleasing in relationships – something we can all relate to – as she tries to decide what the future holds for her romance with boyfriend Steve.

Wood has recently opened up about her body dysmorphia being linked to her need to please people, which she clearly channels into her beautiful portrayal of both the difficulty in owning your own body and making decisions that are best for you, even if they’re not necessarily the best for someone you care for.

Lots of important issues are explored, but there’s also a laugh (and a love declaration) a minute. From “flying faeces” on a school trip to France to the excruciating will-they-won’t-they see-saw ride between Maeve and Otis, our hearts are left full and our bellies sore from laughing by the season’s conclusion.

But above all, season three does a much more important job than that. School classes based around sex education and relationships only became a legal requirements in all UK schools in 2020, one year after the Netflix hit first aired. There’s even reason to question how comprehensive they have become in the year since this law was passed.

This season does much to convey the importance of these lessons, and how crucial the voices of female and non-binary people are in these conversations, and how much more we still have to learn.

Sex Education’s third season is available to stream on Netflix.