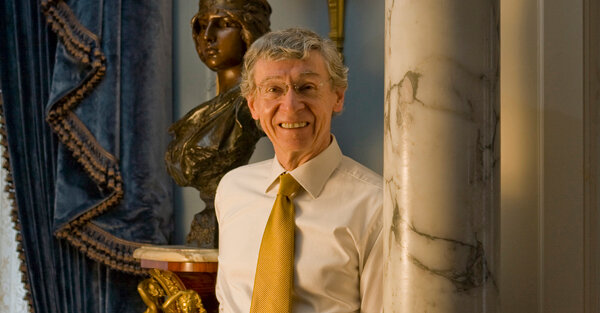 Richard H. Driehaus, an avid investor who grew his grade-school coin collection into a fortune that he wielded to champion historic preservation and classical architecture, died on March 9 in a Chicago hospital. He was 78.

The cause was a cerebral hemorrhage, said a spokeswoman for Driehaus Capital Management, where, as chief investment officer and chairman, he had overseen some $13 billion in assets.

Mr. Driehaus (pronounced DREE-house) restored landmarks in the Chicago area and gave the city a palatial museum that celebrates the Gilded Age. He also established a $200,000 annual prize in his name for classical, traditional and sustainable architecture as a counterbalance to the $100,000 Pritzker Prize, funded by another Chicago family, which he viewed as a validation of modern motifs that were a “homogenized” rejection of the past.

He was immersed in the stock market from the age of 13, took nosebleed gambles on risky rising stocks, and in 2000 was named one of the 25 most influential mutual fund figures of the 20th century by Barron’s.

While he also won a lifetime achievement award from the American Institute of Architects in 2015 for sponsoring competitions that produced better designs, he never formally trained in that field. But he knew what he liked, and what he didn’t.

“I believe architecture should be of human scale, representational form, and individual expression that reflects a community’s architectural heritage,” he told the architect and urban designer Michael Lykoudis in an interview for the Institute of Classical Architecture & Art in 2012.

“The problem is there’s no poetry in modern architecture,” he said in an interview with Chicago magazine in 2007. “There’s money — but no feeling or spirit or soul. Classicism has a mysterious power. It’s part of our past and how we evolved as human beings and as a civilization.”

Asked whether he considered buildings designed by Ludwig Mies van der Rohe, for example, to be appropriate, he told Architectural Record in 2015: “They’re mechanical, industrial, not very human. It’s like my iPhone, which is beautiful, but I wouldn’t want the building I live in to look like that.” He added: “Architects build for themselves and build for the publicity. They don’t really care what the public thinks.”

The first Richard H. Driehaus Prize, presented through the University of Notre Dame School of Architecture, was awarded in 2003 to Léon Krier, a designer of Poundbury, the model British town built according to the Prince of Wales’s architectural principles. The first American laureate, in 2006, was the South African-born Allan Greenberg, who redesigned the Treaty Room Suite at the State Department.

In 2012, Mr. Driehaus’s opposition to Frank Gehry’s original design for the Dwight D. Eisenhower Memorial in Washington was credited by many critics with improving the final design.

In a statement after Mr. Driehaus’s death, A. Gabriel Esteban, the president of DePaul University in Chicago, Mr. Driehaus’s alma mater (and a recipient of his philanthropic largess), attributed Mr. Driehaus’s success to an “inquisitive mind, relentless determination and unquenchable desire to learn.”

Mr. Esteban said Mr. Driehaus’s approach was the result in part of his “education at neighborhood parochial schools.” Mr. Driehaus himself credited the nuns who taught him at St. Margaret of Scotland Catholic School on the Southwest Side of Chicago. “In addition to reading, writing and arithmetic,” he told Chicago magazine, “they taught me three things: You have to continue to learn your whole life, you have to be responsible for your own actions, and you have to give something back to society.” 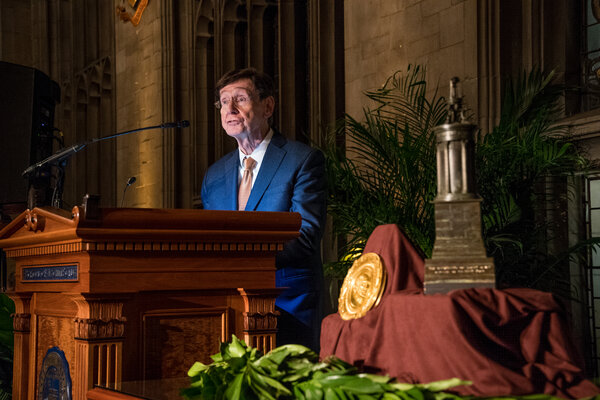 Richard Herman Driehaus was born on July 27, 1942, in Chicago to Herman Driehaus, a mechanical engineer for a company that made coal mining equipment, and Margaret (Rea) Driehaus. He grew up in a bungalow in the Brainerd neighborhood.

Because his father had been entrenched in a dying industry, his hopes of transplanting his family to a better home were never realized. (His mother returned to work as a secretary when her husband developed Alzheimer’s disease in his 50s.) “I knew I would never work as hard as my dad and not be able to afford a house like he wanted for us,” Mr. Driehaus told Philanthropy magazine in 2012. “What my dad couldn’t do, I wanted to do.”

He began raising money for the family as a coin collector in the third grade. He subscribed to a coin magazine, he later recalled, and “looked in the back of the publication to see what they were actually trying to buy for their own accounts, rather than what they wanted to unload on the public.”

Intrigued when he was 13 by a page in The Chicago American “with corporate names, numerous columns, and numbers showing lots of fractional changes in small print,” he decided that “this was the industry for me” and invested the money he made from delivering The Southtown Economist in stocks recommended by financial columnists. The stocks tanked, teaching him to research each company’s growth potential on his own.

He flunked out of the University of Illinois at Chicago, enrolled in Southeast Junior College and then transferred to DePaul, where he earned a bachelor’s degree in 1965 and a master’s in business administration in 1970. He worked for the investment bank A.G. Becker & Company, becoming its youngest portfolio manager, and for several other firms before starting his own, Driehaus Securities, in 1979. He founded Driehaus Capital Management in 1982.

He married when he was in his early 50s; the marriage ended in divorce. He is survived by three daughters, Tereza, Caroline and Katherine Driehaus, and two sisters, Dorothy Driehaus Mellin and Elizabeth Mellin.

“I never did anything until I was 50,” Mr. Driehaus told The New York Times in 2008. “I spent my early years making money for my clients. Now I’m ready to have some fun.”

He did, staging his own extravagant themed birthday parties for hundreds of guests at his mansion on Lake Geneva (at one gala, he made his grand entrance on an elephant) and indulging his passion for collecting.

He started with furnishings he provided to a bar called Gilhooley’s, then moved on to decorative arts and art nouveau for the landmark Samuel M. Nickerson mansion, a palazzo that he restored as the Richard H. Driehaus Museum. He also amassed a fleet of vintage automobiles.

He gave as good as he got, several hundred million dollars’ worth — to DePaul and to Chicago theater and dance groups, Catholic schools and other organizations often overlooked by major philanthropies. And he felt quite at ease being a very big fish in what he acknowledged was a smaller pond — but a more hospitable one.

“In New York, I’m just another successful guy,” he told the City Club of Chicago in 2016. “You can’t make an impact in New York. But in Chicago you can, because it’s big enough and it’s small enough and people actually get along enough.”