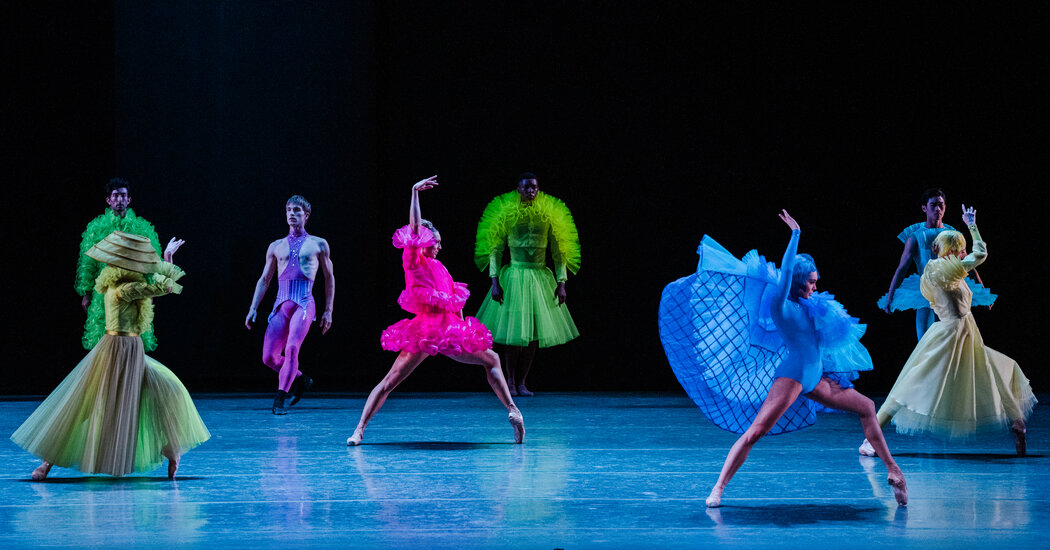 It’s been a long 18 months spent languishing in soft clothes, but, finally, fashion is making a comeback on the streets of New York City. It also returned to the stage of New York City Ballet. On Thursday, the company resurrected its Fall Fashion Gala at Lincoln Center with two new ballets dressed up in designer clothing from head — or, in once instance, a headpiece veering into lampshade territory — to pointe shoe.

The question wasn’t so much which dance wore its costumes better, but which one wore them brighter. (And sometimes bigger.) Apparently, coming out of a pandemic isn’t the time to tone things down. And while I go all out for crazy clothes, the program, which began with Jerome Robbins’s “Glass Pieces,” didn’t manage to push fashion or ballet in any innovative direction: The vibe was more “Twilight Zone” — why make a dance when a weird dream with whirling fabric will do? — meets Moira Rose, without the shock or the wit.

This year, Sidra Bell teamed with the designer Christopher John Rogers in “Suspended Animation,” and Andrea Miller collaborated with the Colombian American designer Esteban Cortázar in “Sky to Hold.” Both of these contemporary choreographers created digital works for the company earlier in the pandemic. And while they took different approaches for the gala — austerity for Bell, melodrama for Miller — both ballets had a way of sliding into a hole of reductive mediocrity.

Instead of fast fashion — disposable, flimsy, forgettable — this seemed to be a night of fast dance. It’s not destroying the planet, but it’s a wasted opportunity, and in dance, where money is hard to come by, that is a destructive act. These ballets, like so many others from the fashion gala, won’t last. And they shouldn’t.

While Miller’s frantic work, with its patched-together sections, expended energy in the most dispiriting way, Bell’s “Suspended Animation,” set to music by Dosia McKay, Nicholas Britell and Oliver Davis, created more of an internal experience. At times, the dancers, wearing Rogers’s sculptural designs — the most delightful (and Molly Goddard-ish) were Isabella LaFreniere’s hot pink and Mira Nadon’s electric blue — seemed to glide across the stage like chess pieces.

Because the focus is heavier on presentation than steps, the dancers’ bodies were more in tune with the air around them; in some ways, “Suspended Animation” was less of a dance than a dance installation in which movement was made visible or obscured depending on the costume. As it dragged on, some dancers peeled off outer layers as if shedding skin, and in keeping with Bell’s title, they did seem suspended — like fantastical sea creatures floating in the darkest depths of the sea.

Once bodies were made more visible, the dancing afforded a glimpse or two of corporeal majesty: Teresa Reichlen’s tranquil luster proved that she can overpower the shiniest of costumes, while Megan Fairchild’s vulnerability came through as she used her limbs to carve delicately through the space. But this is City Ballet and glimpses are not enough; the result was a waste of time and talent.

In her rambling and long-winded “Sky to Hold,” Miller collaborated with Cortázar, whose costumes — more fitted and conventionally suited to dancing — changed over time and became more colorful with Nicole Pearce’s lighting, and with the Colombian-Canadian singer-songwriter Lido Pimienta who composed the score and performed onstage — though off to the side — in an electric yellow dress. As she sang, her body reacted, grooving to the sound of her strong and silky voice. Sometimes I wondered, is this the dance to be watching?

Pimienta came up with a sweet story for the ballet: A seed falls in love with a storm. The seed was Taylor Stanley, whose decisive, quicksilver dancing couldn’t, try as it might, carry this incoherent ballet; the storm was Sara Mearns, whose hair acted like something of a fifth limb. Throughout were dancers evoking images from the natural world as they darted across the stage like swaying trees or gusts of wind. It ended in yellow: The inevitable sunshine that comes after a storm.

As “Sky to Hold” meandered from section to section, dancers balanced on the shoulders of others like royalty; Stanley, on the floor — he was, after all, a seed — rolled from his stomach to his back with the rubbery, sinuous ease of a breaker and later arched into a backbend that extended until he rested the top of his head on the stage.

When romance struck, Stanley and Mearns met on the floor, easing toward each other as their silhouettes played on the wall behind them. The visual effects were like something you might witness in children’s theater; same for the unfortunate Mylar curtain that covered the back of the stage in other sections. This display of swirling bodies trapped in a storm and finding their way to the ending — a sunny hug — was depressingly slight.

That both works were choreographed by women says something about the ballet world’s attempt to expand beyond that all-too-familiar character: the white male choreographer. And it’s fine that the company reached outside of its stylistic comfort zone to more contemporary dance makers. But in the end, both of the premieres felt already dated, especially compared to “Glass Pieces,” which was created by Robbins in 1983 after the death of George Balanchine. It’s a masterful ballet; it’s about resilience.

Though Thursday’s performance was on the rough side — the counts are tricky — this ballet in three movements, set to music by Philip Glass, now seems like an illustration of the pandemic. At first, dancers cross the stage like pedestrians — walking freely and purposefully as if on a bustling city street. In the second movement, a gorgeous, somber pas de deux pulls the focus inward, like sheltering in place. (The presence of Amar Ramasar, though, who partnered Maria Kowroski, continues to be unnerving; he was reinstated at the company after a photo-sharing scandal.) And in the third, dancers explode with joy, a snapshot of the energetic force that is New York City coming back to life.

Ben Benson’s costumes, a mosaic of colorful practice clothes and space-age unitards, felt the most modern, too. But this year, there has been an important tweak, beginning with this ballet: City Ballet has finally begun a shift from the standard pink to flesh-colored tights and shoes, to better match each dancer’s skin tone. In the performances I’ve seen of the ballet this season, the dancing of three Black company members in particular — Olivia Boisson, India Bradley and Savannah Durham — has taken on greater radiance. Clearly, this was the most important fashion statement of the night.