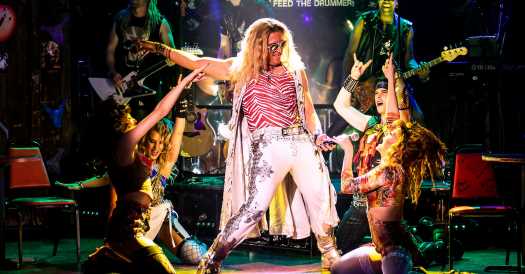 Are you ready to down Jell-O shots, headbang and play air drums, New York? Because “Rock of Ages” is back in town for a 10th-anniversary run, and it’s time to get happily stoopid.

That last part is not easy to pull off for a show, mind you; you don’t score five Tony Award nominations and spend almost six years on Broadway by being inept. There are brains under all the big hair in this jukebox musical about love and rocking out on the Sunset Strip of the 1980s.

“Rock of Ages” has returned for a scaled-down production Off Broadway at New World Stages, where it had its New York premiere in 2008, before relocating to Broadway the next year. The show somehow plays fairly well despite an environment that’s generally a lot less tolerant of men pushing around women in the name of rock ’n’ roll — or in the name of anything, really. Its saving grace is a certain good-natured goofiness that somehow tampers the deep-rooted sexism of the L.A. metal scene. It helps that the director and choreographer are, now as then, two women: Kristin Hanggi and Kelly Devine.

Also returning is the original cast member Mitchell Jarvis, who is back overplaying the narrator, Lonny — a puckish employee of the Bourbon Room, the rock club where most of the action takes place. 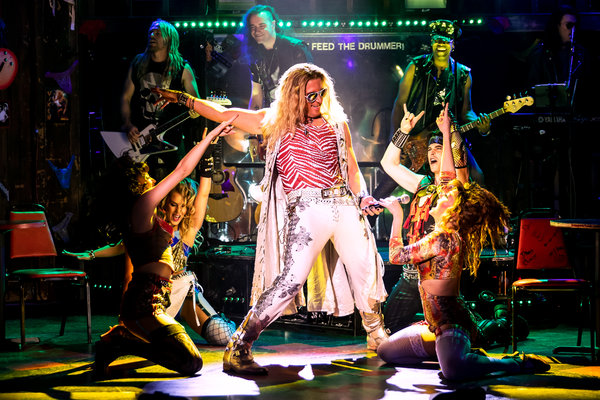 As revered as the venue is among fans of the type of music that requires perms and codpieces — remember, we are in 1987 — its existence is threatened by a rising tax bill and the pressure of German developers (Tom Galantich and Dane Biren) trying to clean up the Strip. To raise money, the Bourbon Room’s owner, Dennis (Matt Ban), gets the megastar band Arsenal to play there before its singer, the preening Stacee Jaxx (PJ Griffith), takes off for a solo career.

Against this high-stakes background, Drew (CJ Eldred), a bar back and aspiring singer, and Sherrie (Kirsten Scott), a waitress and aspiring actress, work on their one-step-forward-two-steps-back romance. Both are remarkably sweet and innocent, maybe because they work in the most wholesome den of iniquity you can imagine — this is definitely not a stage adaptation of the infamous Mötley Crüe memoir “The Dirt.”

Onto this story — which grinds to an unfunny halt whenever the Germans appear — Chris D’Arienzo’s book grafts as many 1980s hits, often in shortened form, as possible. While “Rock of Ages” is often referred to as a hair-metal musical, its song list expands to earworms by such contemporaries as Pat Benatar, Foreigner and Journey, whose “Don’t Stop Believin’” has become the de facto anthem of waving phones and upbeat catharsis.

And now “Rock of Ages” also includes music by Def Leppard, which belatedly agreed to be licensed by a show named after one of its songs. That hit and “Pour Some Sugar on Me” propel a number at the Venus Club, the strip joint where Sherrie ends up after being fired from the Bourbon Room on Stacee’s orders. 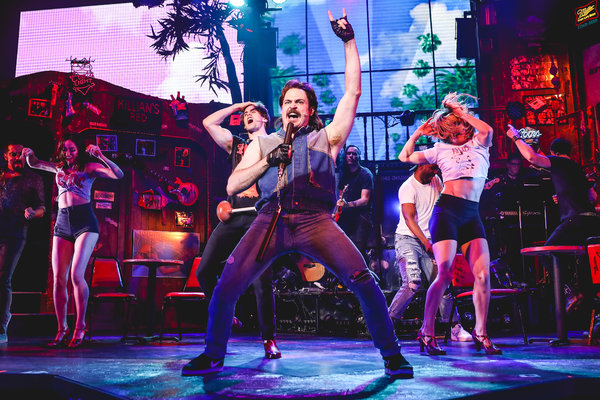 In the 2012 film adaptation, the role of Stacee — played there by Tom Cruise — was beefed up and so bad that it now gets a mocking shout-out toward the end of this show: “Tom Cruise had a monkey,” Lonny says, “which is … fun.”

Stacee doesn’t actually appear all that much in the stage version, which is a problem because he’s the most fun character; Mr. Griffith cleverly plays him like a manipulative, aging Jeff Spicoli, the stoned surfer dude from “Fast Times at Ridgemont High.”

Perhaps it’s time for him to get his own spinoff musical. If classic-rock acts can go on forever, why can’t he?

This information was last updated on April 26, 2019