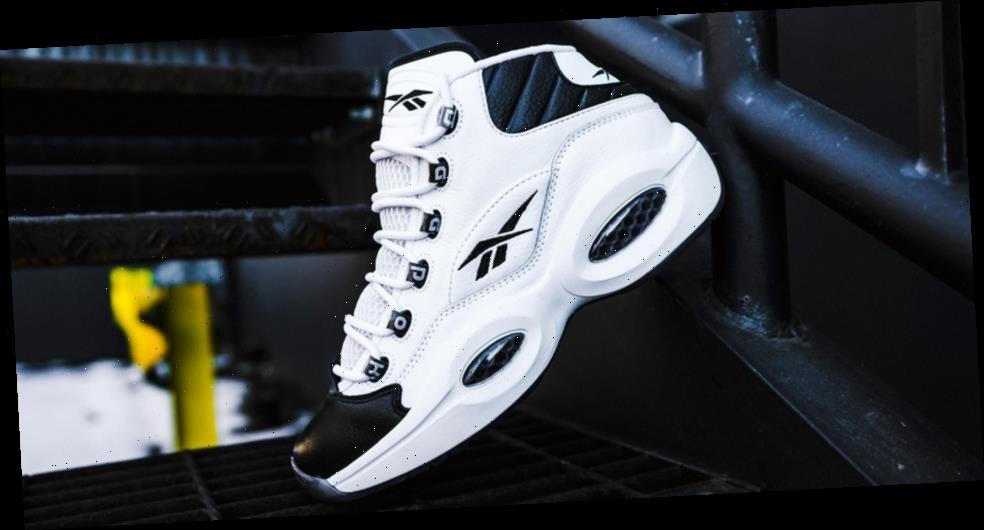 Widely regarded as one of the greatest NBA All-Star Games of all time, the 2001 ASG in Washington, DC saw Allen Iverson take home MVP honors after leading a stirring comeback performance from his undersized East squad — all while wearing an unreleased pair of white and black Reebok Question Mids. Iverson’s halftime speech, efforts to erase a 21-point deficit with only nine minutes remaining and game shoes have become the stuff of legend, so Reebok is celebrating the 20th anniversary of the Answer’s memorable performance by re-releasing his Question Mid from the game and dubbing it the “Why Not Us?”

Pulling its moniker from Iverson’s Herculean 15-point fourth quarter and the postgame press conference where he noted “We were all sitting on the sideline saying: ‘Why not us?’,” the shoe is built from premium white leather with a black leather toe cap and heel piece providing contrast. Branding arrives via a black midfoot Vector logo, a white Question graphic on the heel and black/white eyestays that spell out “Reebok.”

A special tweak is provided by the inner side of the tongue, with the right shoe boasting a “Why Not Us?” text graphic and the right a large question mark. More black trim around the tongue, black DMX cushioning units in the midsole and a black #3 badge on the heel add further to the yin and yang contrast. Smoky black translucent outsoles with a Vector logo round off the look.

Expect the Reebok Question Mid “Why Not Us?” to hit the Reebok webstore and retailers like Foot Locker on March 6 with an MSRP of $140 USD. For a trip down memory lane, see highlights of the 2001 ASG with Iverson, Kobe Bryant, Shaquille O’Neal, Tim Duncan, Tracy McGrady, Vince Carter and more below.