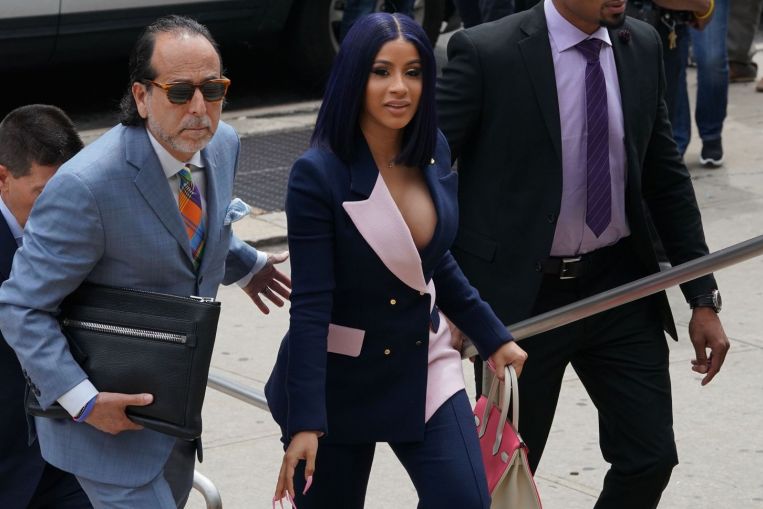 The 26-year-old performer from the Bronx borough of New York City entered the plea in an appearance at New York Supreme Court in the borough of Queens.

“Not guilty sir, honour,” Cardi B, whose real name is Belcalis Almanzar, told the judge.

As she entered the court building, wearing a navy blue and pink pantsuit and carrying a pink handbag, one fan shouted “Free Cardi B”.

The singer, known for chart-topping hits Bodak Yellow and I Like It, waved back with a hand sporting long, pink fingernails, before being ushered into the court by her lawyer and two bodyguards.

The rapper surrendered to New York City police last October after a complaint claimed she was involved in a fight at the Angels NYC strip club in Queens.

“I ain’t going to jail, I got a daughter,” she declared near the end of her sold-out concert on Saturday night at the Staples Centre in Los Angeles.

Cardi B initially faced misdemeanor charges of assault and reckless endangerment, but was indicted by a grand jury on felony charges earlier this month.

According to police, the rapper got into an argument in August with two of the club’s female bartenders. She had accused one of them of having an affair with her husband, Offset, a member of the rap trio Migos, according to local media.

The New York Times, citing police, said Cardi B’s bodyguards and members of her entourage attacked the sisters with bottles and chairs.

The singer left the Queens court on Tuesday in a black SUV without commenting to the press. Her lawyer Jeff Kern, did not respond to a request for comment.

Her latest single, Press, is currently at 60 on the Billboard Hot 100 chart.

Cover art for the single, in which she says “Cardi don’t need more press,” shows her naked and being escorted out of a building as older, male photographers push towards her.