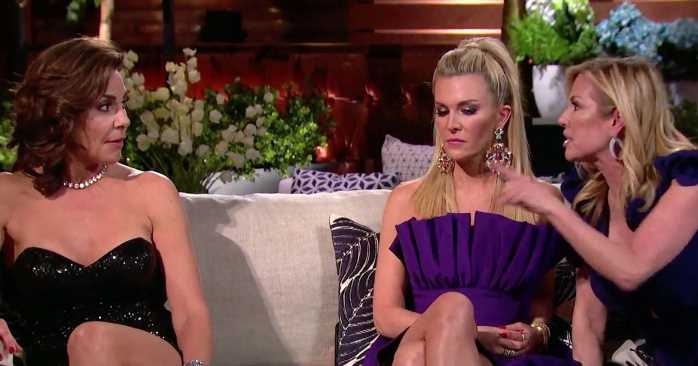 The countess is in the hot seat. Luann de Lesseps’ Real Housewives of New York City costars held her accountable for her sobriety during the season 11 reunion.

“As you know, I slipped,” Luann admits in Us Weekly’s exclusive supertease of the three-part reunion.

Luann, who was arrested in December 2017 in Palm Beach for battery, trespassing and disorderly intoxication, was nearly sent back to jail following a failed alcohol test in May. She ultimately agreed to a second stricter plea deal.

“You failed yourself,” Ramona Singer tells her costar. “I’m not going to give you a f–king break.”

Luann adds that she knew everyone was going to attack her: “Get on your boxing gloves, it’s fine.”

Barbara Kavovit, who has been friends with Luann for years, opted to take a shot at the cabaret star’s singing abilities.

“Take that and shove it up your ass,” Luann fires back.

According to the press release, Bethenny Frankel also argues with Luann over whether paparazzi was actually following her.

During part one of the reunion, fans can expect the Skinnygirl CEO to be candid about the loss of her on-off boyfriend Dennis Shields, who died of apparent overdose in August 2018. The women also discuss Ramona’s comment about his alleged substance abuse issues.

“How smart can Dennis be? I mean, he was on drugs,” Ramona quipped during the March 20 episode of RHONY.

During the reunion, she tells host Andy Cohen and a visibly upset Bethenny that her remarks were “terrible.”

For even more RHONY drama — including accusations that Tinsley Mortimer doesn’t even live in New York City and Dorinda Medley’s comments on the infamous fish room — watch the supertease above!

Part one of The Real Housewives of New York City reunion airs on Bravo Thursday, July 11, at 9 p.m. ET.