Queen Elizabeth II met with President Joe Biden and First Lady Jill Biden in early summer 2021 after inviting the couple to a private tea at Windsor Castle, carrying on a decades-long tradition she inadvertently began all the way back in 1951, before she had even taken the throne as reigning monarch in 1952. The lucky first U.S. President with whom then-Princess Elizabeth met was President Harry S. Truman, at a royal visit to Washington Airport which he attended with First Lady Bess Truman and daughter Margaret. 70 years later, Her Majesty has continued the tradition with the Bidens, though sadly with the late Prince Philip, Duke of Edinburgh no longer by her side. In over half a century of photos, American history has seen 14 different presidencies and Queen Elizabeth II has seen 13 of those presidents in person (she never met LBJ), smiling for a photo with everyone from Nixon and Reagan to Obama and Trump. 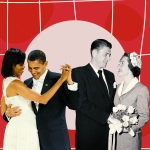 While the Queen was of course gracious on each and every one of these occasions, there’s no doubt that she formed closer connections with some U.S. leaders than others, famously growing close with both President Ronald Reagan and his wife Nancy Reagan. Kate Andersen Brower, author of First Women: The Grace and Power of America’s Modern First Ladies, shared this anecdote to CNN about the friendship between the Reagans and Her Majesty.

“Mrs. Reagan wrote about a 1983 visit with Queen Elizabeth and Prince Philip at the Reagans’ California ranch in her memoir My Turn, [writing]: ‘We had told them about the ranch during our visit to Windsor Castle, and the Queen was dying to go riding with Ronnie. But the weather was awful, so instead the Reagans left the ranch to go on the royal yacht Britannia.”

“Of the last-minute change of plan, Reagan wrote: ‘I spent that evening with the Queen, sitting on a sofa in the large living room, talking about our children like old friends,’” Brower recounted. It’s safe to say few First Ladies — few people at all — have enjoyed that kind of closeness with the Queen. Read on for 70 years of presidential visits with the one and only Queen Elizabeth II.