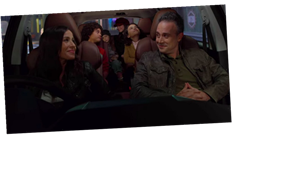 Raising three kids alone is no joke, but with Punky Brewster on the job, it’s bound to be an adventure! The trailer for the upcoming sequel series by NBC’s Peacock streaming service dropped on Feb. 2, and we’re already hooked. Similar to other revival series like Disney Channel’s Girl Meets World and Netflix’s Fuller House, Punky Brewster follows an all-grown-up Punky as a single mother of three trying to get her life back on track when she meets a young girl (Quinn Copeland) who reminds her a lot of her younger self.

The trailer features Soleil Moon Frye reprising her original role as the titular Punky — still charming as ever — along with Cherie Johnson, who will return as Punky’s best friend, and Freddie Prinze Jr., who guest stars in the pilot as Punky’s ex-husband, Travis. Copeland (Waitress the Musical), Lauren Donzis (No Good Nick), Oliver De Los Santos (Occupation: Rainfall), and Noah Cottrell (Skyscraper) flesh out the rest of the show’s cast. Watch the trailer above and get ready for a second dose of Punky Power when Punky Brewster premieres on Feb. 25!